Thank you for subscribing!
Got it! Thank you!
Home›Trip Ideas›Family & Kids›Fun Things to Do with Kids in Door County, Wisconsin 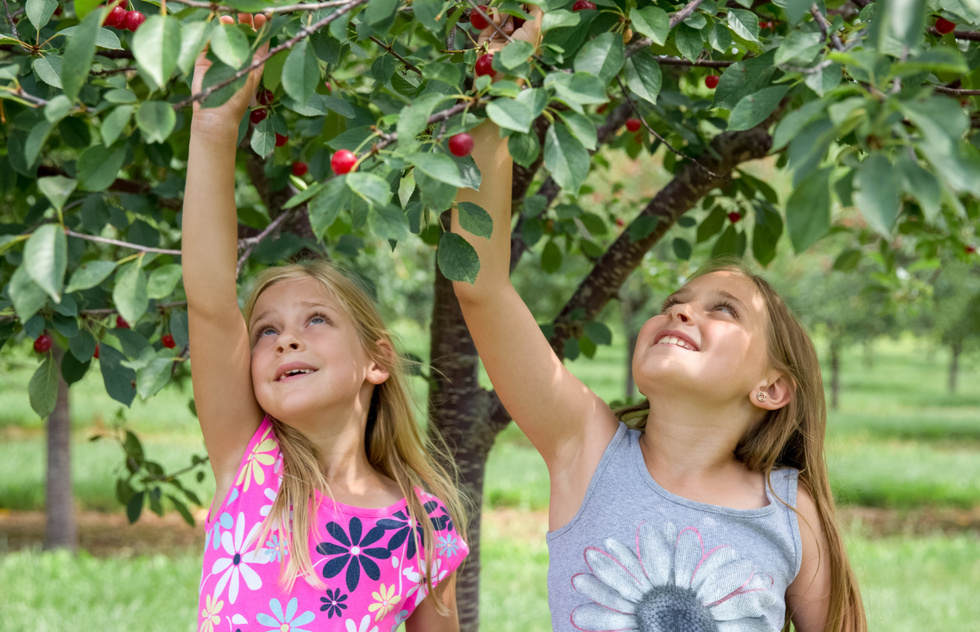 Fun Things to Do with Kids in Door County, Wisconsin

Waterside outdoor adventures, lighthouses, fish boils, and other fun ways for families to fill their days on this Wisconsin peninsula between Green Bay and Lake Michigan

From cave kayaking along the cliffs of Lake Michigan to biking through Peninsula State Park and enjoying succulent lobster bakes and fish boils, Wisconsin’s Door County has no shortage of enriching ways for families to have fun in the outdoors and experience local traditions.

This peninsula jutting into Green Bay and Lake Michigan is kind of like a Midwestern Cape Cod—but with a spirit all its own (and usually more affordable prices).

Here are some of our favorite kid-friendly activities in Door County. 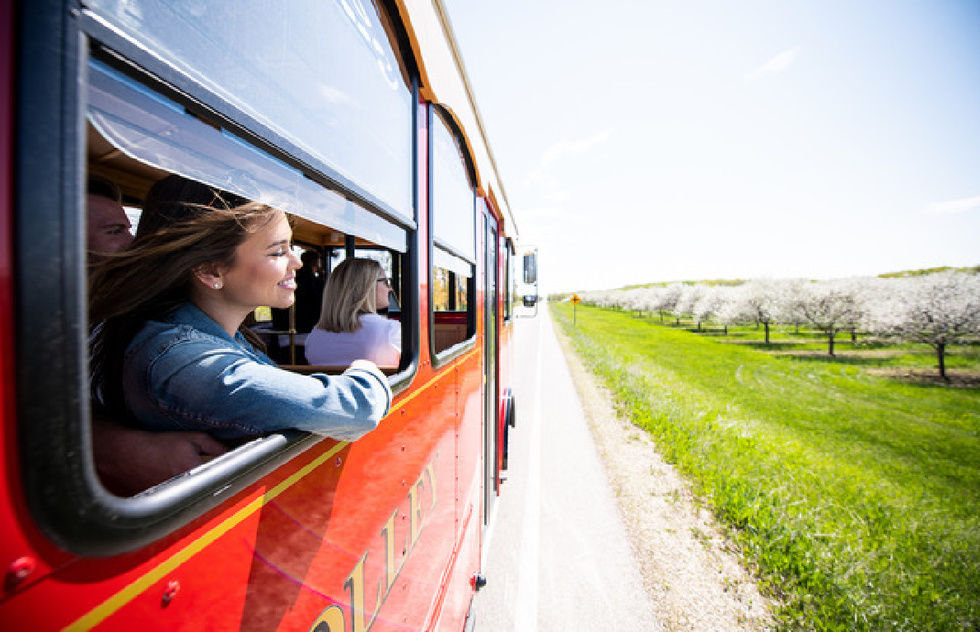 Most kids don’t like to walk around for hours and listen to stories about dead people and bridges. But an open-air trolley moving past cherry orchards, quaint towns, and vast stretches of water dotted by islands and swamps adds a touch of adventure to historical tours. The regular Door County Trolley whisks visitors around the peninsula while guides tell tales of how Door County became the cozy, close-knit community it is today.

Breathe in the scent of today’s catch as you glide by postcard-ready harbors full of swaying sails and fishing boats, and glimpse pockets of picnickers on surrounding lawns. The tour geared toward young families hits the highlights in about 30 minutes and includes an interactive “I Spy” game. Older children will love the 4.5-hour Lighthouse Tour, which includes lunch and a visit to three lighthouses.

If you come in the fall or winter, hear all about haunted lighthouses, sunken ships, and unsolved mysteries on the “Trolley of the Doomed” Door County Ghost Tour (due to spookiness, no kids under 5 allowed). Winter holiday rides feature Santa and some stops at local pubs for holiday cheer. The fun starts at the Door County Trolley station in Egg Harbor.

The Ridges Sanctuary in Baileys Harbor is the most biologically diverse ecosystem in Wisconsin and the site of the state's first land trust, established in 1937. The original 30-acre preserve has expanded to 1,600 protected acres recognized as a National Natural Landmark. Part of the migratory highway, the sanctuary sees 300 different types of birds pass through, making this one of the National Audubon Society’s Important Bird Areas.

Volunteer naturalists lead 2-hour daily hikes through all seasons (including on snowshoes in the winter), and docents are used to welcoming people of all ages, even when that means gently encouraging kids not to put their fingers in the maws of carnivorous red pitcher plants. Guided walks take visitors through abundant flower fields, swale (a swamp’s edge), and, in good weather, to the Baileys Harbor Range Lights, a pair of 19th-century lighthouses (only one of which is usually open to the public) built to keep ships from crashing into hidden reefs. 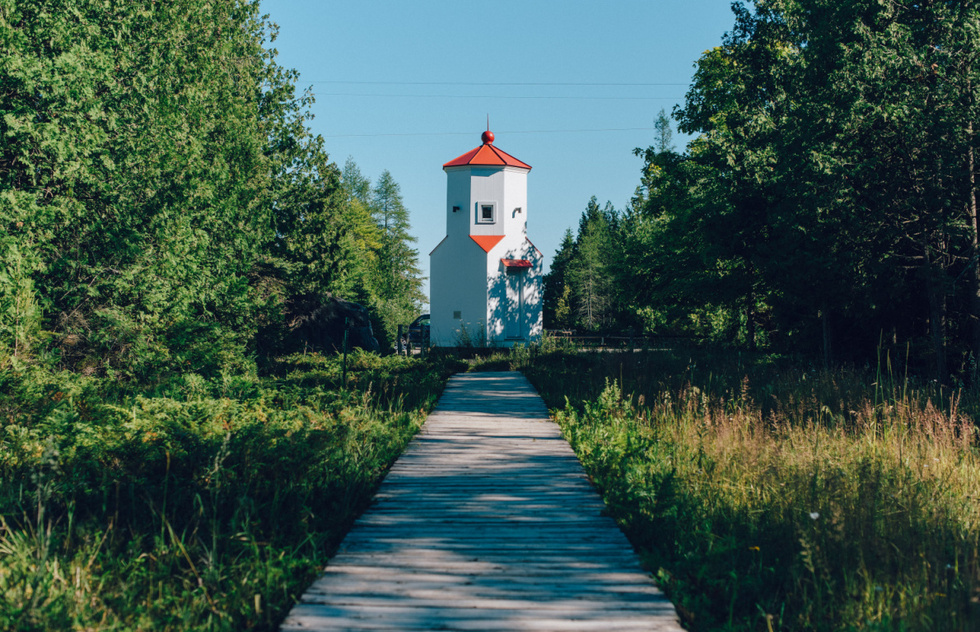 The preserve’s 8-foot-wide accessible Hidden Brook Boardwalk provides a 0.33-mile wooden pathway for wheelchairs and strollers year-round. There’s also a Family Discovery Trail, open from April to November, with 12 different stations where kids can play paleontologist in a “boneyard,” build bridges over a stream, and otherwise learn without realizing it. Begin your explorations off Highway 57 at the Cook-Albert Fuller Nature Center. 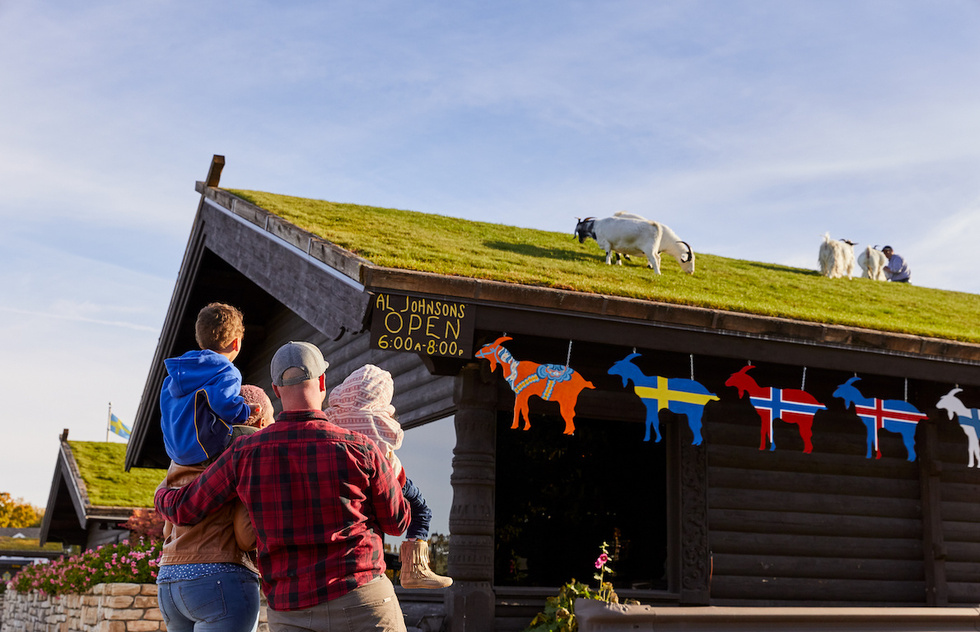 Kids won’t believe their eyes when they look up and see goats grazing on the sod roof of Al Johson’s Swedish Restaurant in Sister Bay. The rooftop ruminants have made the place one of Door County’s most eye-catching establishments, but don’t miss out on the Swedish pancakes served inside as part of the all-day breakfast menu.

You’ll also find a beer garden and shops selling Scandinavian clothes and gifts onsite. If you fall in love with the goats during your visit, you can keep tabs on the animals once you get back home, thanks to the business’s livestreaming Goat Cam.

Peninsula State Park covers more than 3,700 acres dedicated to boating, golfing, swimming, and camping. Kids who like to bike can cruise along part of the 9.5-mile Sunset Bike Route, which is flat enough for most skill levels to navigate with ease (though a section or two might have an incline requiring young pedalers to dismount for a little). The trail skirts marshland with canopies of dripping trees and rays of sunshine peeking through the leaves. You’ll pass the sandy and bouldered shores of Sven’s Bluff and Nicolet Bay, perfect stops for selfies or a picnic.

You can extend or shorten your path via various offshoots; it’s also possible to traverse the trail with strollers and wheelchairs or on foot. Twelve miles of off-road bike trails await more experienced cyclists, and some of the park's interior roads allow for in-line skating.

You can rent bikes in Fish Creek from the aptly named Edge of Park Rentals, located right at the base of the Sunset Bike Route. 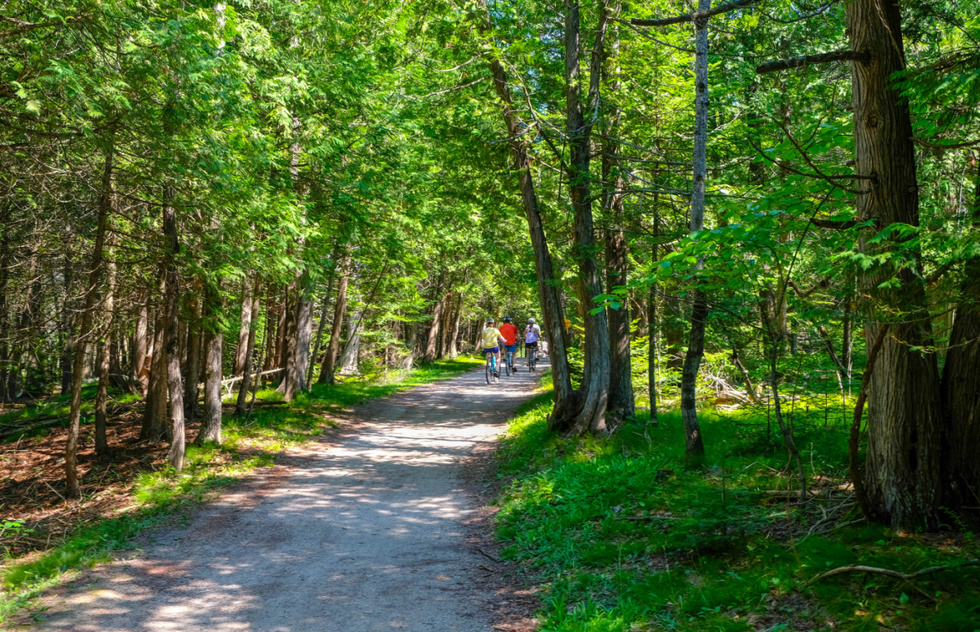 Just a 10-minute drive from the Sunset Bike trail (and still in Peninsula State Park) stands the third iteration of a fire lookout tower originally built in 1914. In 2021, the latest version of the Eagle Tower opened as a great place to savor elevated views of Peninsula State Park’s extensive carpet of trees. Eagle Harbor and Nicolet Bay bring in fresh marine air and supply excellent backdrops for more selfies. Reach the top of the 60-foot-tall tower via 850 feet of switchback ramps accessible to all or, if you want to get your steps in, a climb of 95 stairs. 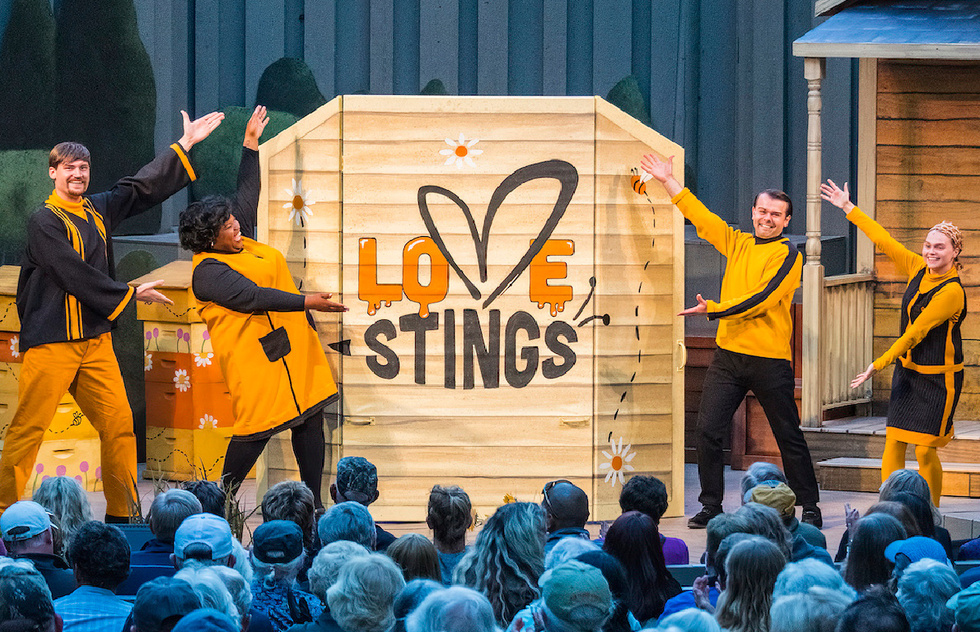 Performing among the trees since 1970, Northern Sky Theater stages family-friendly outdoor musicals at the Peninsula State Park Amphitheater and, ever since the 2019 opening of the Gould Theater, indoor shows during the winter months. The production might be a little silly—like the wisecrack- and pun-laden musical Love Stings we caught during a visit—but performances are lively and likely to appeal to restless youngsters.

Pro tip: The outdoor amphitheater has concrete bench seats, but you can get a foam pad for a $1 donation. Trust us: It’s worth it. 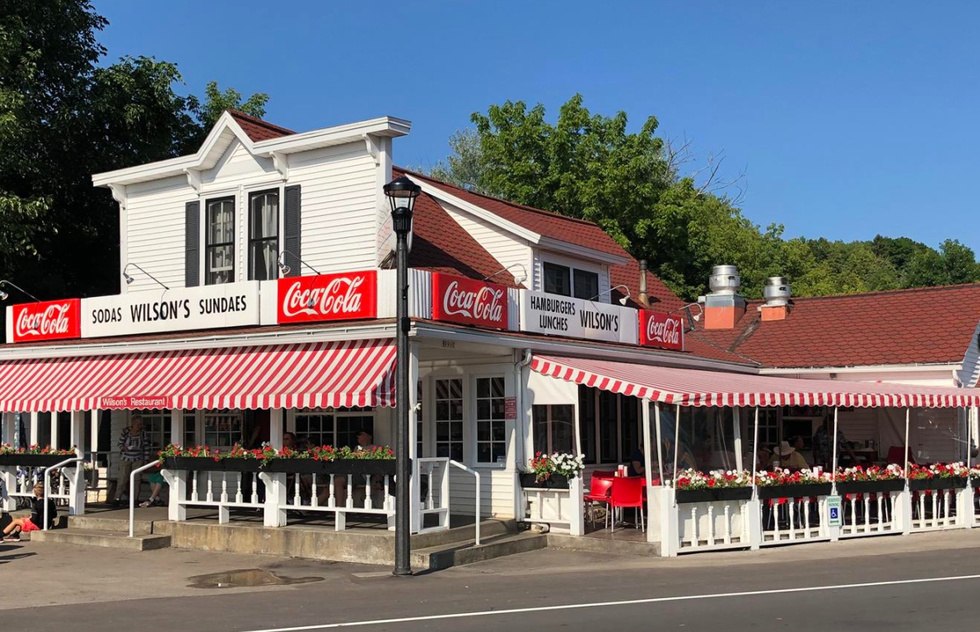 This is a great stop for rewarding the fam after a long day of activities. A pile of homemade ice cream topped with whatever delights the kiddos is cause for smiles no matter how the day started. Throw in a jukebox at the table, a menu full of fried faves, and a server sporting a soda jerker hat, and you’ve got yourself an all-around tasty, nostalgic treat at this restaurant and ice cream parlor that’s been scooping out frozen confections since 1906. Because some people evidently don’t like eating ice cream in icy weather, the shop is closed in winter. 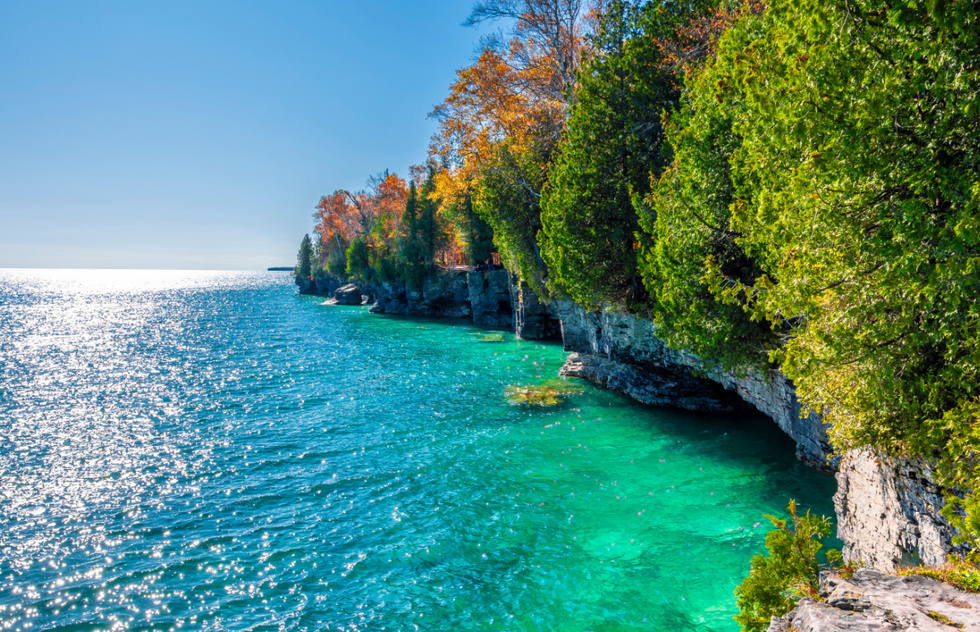 See Door County from a different perspective by plopping a kayak into Lake Michigan and paddling along the cliffs at Cave Point County Park. Along the way, guides from Door County Kayak Tours will entertain you with stories of pirates, shipwrecks, and early settlers. The 150-foot bluffs on the route give way to sea caves and protected coves. At one spot, we witnessed families jumping off the rim of jagged cliffs into the water below.

Dig Into History and the Sand at Whitefish Dunes State Park 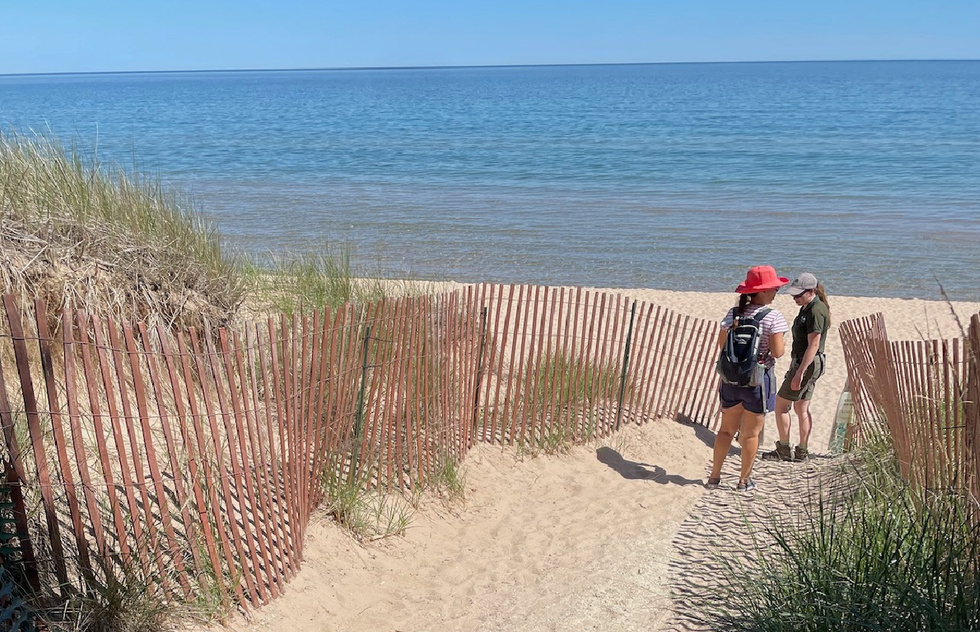 The highest dunes in Wisconsin are located in Whitefish Dunes State Park, but you can’t climb them. Four threatened plant species—Pitcher’s thistle, dune goldenrod, sand reed grass, and dwarf lake iris—grow here, and they are easily trampled and killed. Most of the rarest foliage appears in spring and blooms into the start of winter.

In addition to having a sandy beach, the park’s land has a fascinating history you can learn about on free guided tours. Archaeologists have found evidence of eight different civilizations that lived here over the last 3,000 years or so. When kids go digging in the sand, they just might uncover an ancient artifact. Be sure to stop by the replica village outside the Nature Center to witness what life may have been like for some of those early residents.

Our guide, Brenna, took us along the Red Trail from the Nature Center to the beach, filling us in on the site’s history and the unique plants around us. The Red Trail is open year-round and tours can be booked by calling the park in advance. During winter, guides and visitors hit the trails on skis and snowshoes.

Perk Up at Kick Ash Coffee

Stop by Kick Ash Coffee, operating inside a renovated former Lutheran church in Ellison Bay, for that afternoon pick-me-up and to load up on homemade gluten-free pastries and granola. Owners Christian and Carol Ash are dedicated to using wholesome ingredients sourced from ethical farms to make their popular baked goods, which are concocted onsite in the repurposed church basement. Bring the kids in to munch on those lovingly crafted items while you browse for unique gifts in the boutique.

Meet Birds of Prey at the Open Door Bird Sanctuary 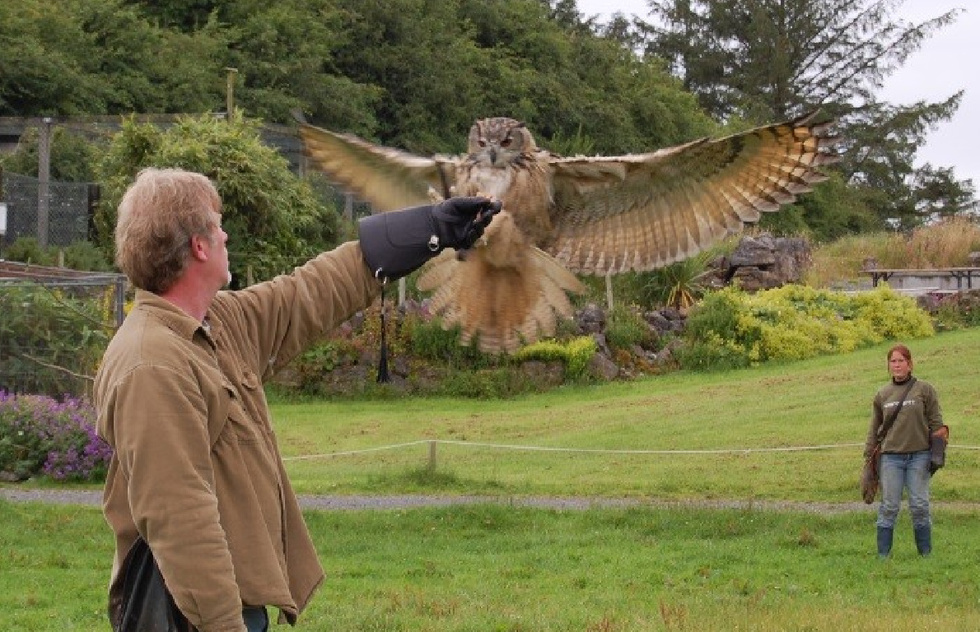 Even kids who aren’t into birds will be enthralled as Open Door Bird Sanctuary’s executive director, Rob Hults (pictured above), introduces them to avian friends such as owls, eagles, and other winged beauties. During demos, you might meet Buddy, a 22-year-old red-tail hawk whose wing injury prevents him from living in the wild. With Buddy perched regally on his arm, Hults recounts his years working with and learning from organizations that protect birds of prey.

Hults focuses on rehabilitating injured birds and housing those that can’t be resettled in the wild due to their conditions. Around 19 formidable creatures live in the sanctuary’s enclosures either full-time or while they recuperate. Set amid 34 easily hiked acres, the facility is open to the public seasonally, with programming that can be customized for small groups. 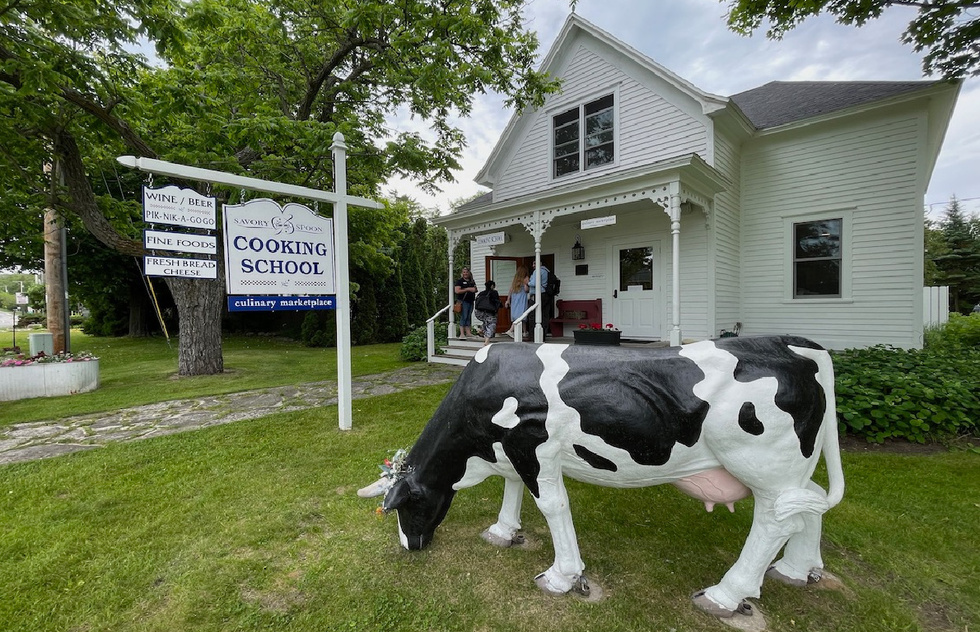 Families won’t feel like they’re in a typical classroom when they take cooking classes at the Savory Spoon’s 1879 restored schoolhouse. Using a structure where generations of area kids learned their reading and writing, well-traveled chef Janice Thomas and occasional visiting chefs teach small groups about putting distinctive spins on familiar dishes. Our crew made a pea-based guacamole—with no avocados! As cherry is a huge crop in Door County, we also made cherry chutney with cheese butter on focaccia. It tasted every bit as good as it sounds.

Classes, which include options for cooks as young as 7, typically run about 3 hours. Everyone gets a chance to smash or blend or mix their way to the final feast, when all involved sit down around linen-dressed tables to savor their creations.

Door County’s Scandinavian roots date to the 1800s, when immigrants from that region relocated here because the weather, terrain, and abundant fishing reminded them of home. Located in the northernmost cove of Door County, Rowleys Bay Resort keeps some of that community’s tastiest culinary traditions alive at Grandma’s Swedish Bakery, where visitors can take on gigantic cinnamon rolls and other Swedish delicacies.

The resort has 70 rooms and cabins housed in red buildings with white trim on property overlooking 700 feet of pristine shoreline (part of the Mink River Estuary State Natural Area) and a marina operated by the hotel. From April to October, guests go canoeing, kayaking, windsurfing, and sailing during the day, before gathering around fire rings for traditional fish boils at night. In winter months, there’s ice fishing and snowshoeing opportunities nearby. 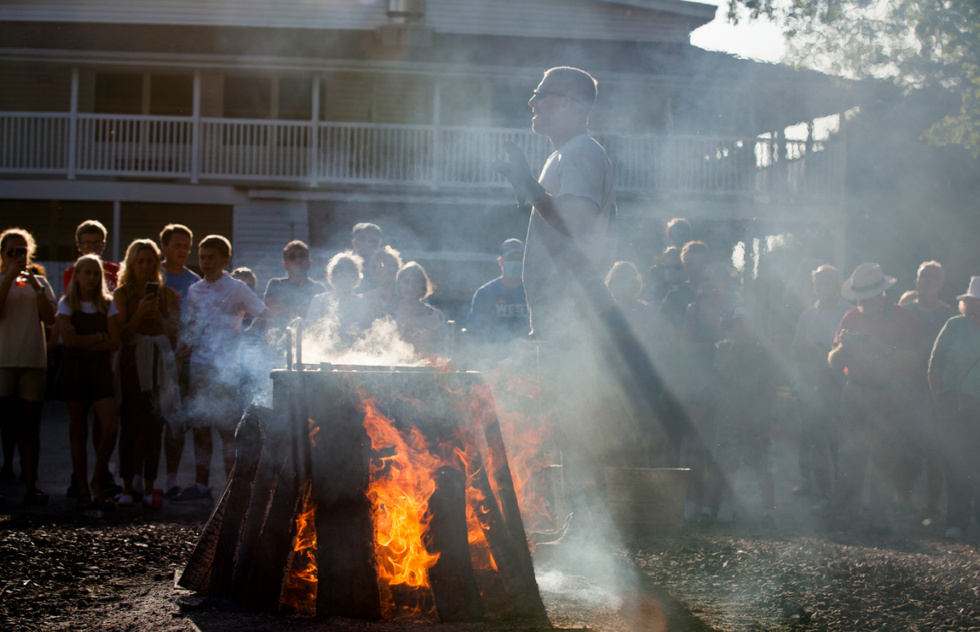