Thank you for subscribing!
Got it! Thank you!
Home›Trip Ideas›Family & Kids›Nightmare Guests: 5 Tales From Hotel Housekeepers 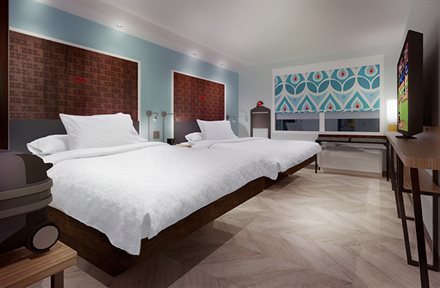 From stolen bedding to bedbug infestations, these hotel housekeepers have seen it all. Here's what not to do on your next hotel stay.

Hotel guests often feel entitled. After all, when was the last time that you made the bed before checking out?

Each day, housekeepers are tasked with restoring each room to its original condition. As it turns out, a trashed hotel suite à la The Hangover is of little concern -- a bed full of guests in the buff can make a broken mirror or stolen bathrobes seem positively tame.

These hotel housekeeping veterans share their stories from the trenches.

The Honeymoon Suite: The More the Merrier?

Many hotels offer a honeymoon suite for newlyweds who typically spend their wedding night near home before jetting off to Europe or the Caribbean.

As a housekeeping manager at a three-star hotel in Oklahoma, Jackie (last name withheld) has come across her fair share of rose petals over the years -- fortunately, the hotel uses synthetic petals that are easier to clean up the next day. One morning, however, after knocking several times with no response, one of the housekeepers on Jackie's staff walked into the honeymoon suite -- and found seven people sleeping in the bed.

"The room was trashed," Jackie says. "There were beer bottles and condoms everywhere."

The manager recalls that the housekeeper just turned around and walked out. "They never knew we had come into the room," she says. "When they left, we went in there to clean."

The honeymoon suite isn't the only hotel room that sees a lot of action. Guests in another room brought along chocolate whipped cream, which ended up all over the hotel's imported Italian upholstery.

"There were butt prints on the window, boot prints on the chair," Jackie says. "We ended up charging them $650 to have the furniture taken out and cleaned. They were also able to get the big mirror out of the bathroom, and they brought it into the living area -- so they could, I guess, watch themselves."

Take it or Leave it: When Guests Steal

It's common for guests to leave the hotel with more than they checked in with, be it a bathrobe (which should be left behind) or hotel toiletries (which guests are welcome to bring home).

However, one bold family staying at the Oklahoma hotel was caught stealing a king-size comforter, which a supervisor saw sticking out of the mother's bag. An inquiry revealed that the woman had also managed to stuff a king-size blanket into the bag, as her daughters snuck four bed pillows out to the car.

In most cases, hotels require a deposit or credit card authorization at check-in. If the woman hadn't been caught at checkout, her card would have been charged more than $600 -- the amount required to replace the bedding she attempted to steal.

When Guests Leave Valuables Behind

While some guests leave with hotel bedding, plenty of others forget to pack up valuable belongings. Hotel housekeepers find everything from bags of cash to electronics and jewelry left behind in hotel rooms and the hotel safes. These items are tagged, logged, and kept locked up for between 30 and 90 days, depending on the hotel and the item's value.

At a Westin property near Chicago, more valuable items are released to the staff member who reported them (typically housekeepers) if the items remain unclaimed for 90 days, according to Ed Bell, the Westin's director of housekeeping. Otherwise, those items are donated to charity.

Why can't the front desk easily reunite lost items with a guest? The Westin property has a strict privacy policy, which means employees cannot call guests who leave items behind, Bell says. Even if a frequent guest forgets something in the room, employees are restricted from contacting that guest, though items are returned upon check-in during the next stay.

"If it's not in the garbage can, it's not garbage," Bell says. "We even save socks and underwear; we don't take any chances."

The Guest that Won't Check Out: When Bedbugs Attack

It's a call that no hotel manager ever wants to receive, but guest complaints about bedbugs are taken very seriously, no matter how insignificant the threat.

"Bedbugs have nothing to do with the cleanliness of the hotel," says Pat Baird, executive housekeeper at the Peabody Orlando (www.peabodyorlando.com). "They're mobile critters, and they just go where people go. What's important is that you need to have a plan. You need to have a protocol in place to ensure that you don't have a problem."

Baird says the Peabody takes countless precautions to ensure that guests are protected against bedbugs and other pests. For example, even if no infestations are suspected, a certified K-9 team inspects each of the hotel's 1,646 guest rooms every three months.

As the hotel guest, be sure to report any suspicions of bedbug sightings. In this case, your complaint could actually help.