Thank you for subscribing!
Got it! Thank you!
Home›Trip Ideas›Food and Drink›New Ways You Can Get Great Food to Your Hotel Room—Without Room Service 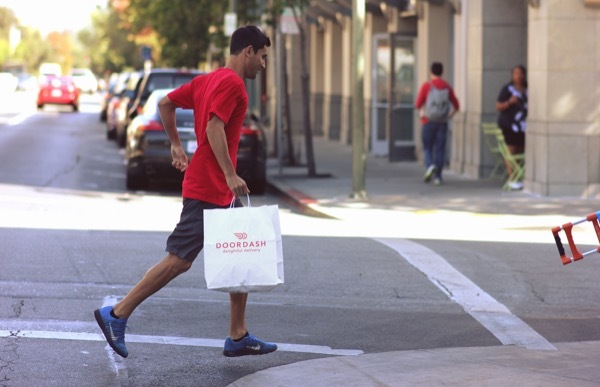 The websites and apps for when you want a truly special meal on vacation...but don't want to go to a restaurant

The atmosphere is buzzy, the lighting is dim, the waiter makes you feel like you’re the most important person on the planet—yes, there are definite perks to eating out when on the road. But let’s face it: Cuddling in your cushy hotel bed and renting a movie has serious appeal, too, especially if you spent the day at the airport or hitting the sights.

Time was when eating in your hotel room meant mediocre rooms service or a pizza from a nearby joint. But in the last three years, some services have popped up to deliver food from restaurants that get so many walk-in customers they haven't done take-out before now. In a few cases, these may be the city’s most popular hotspots, places where it’s near-impossible to get a reservation.

The big players in the space are websites (and apps) GrubHub and Seamless—actually the same company, though they maintain separate websites—but they only work with restaurants that already offer delivery, acting as a simple listing service (with some warnings; see below). But some apps use their own delivery folks, and so they can expand the types of food they offer:

Amazon delivery is only open to Amazon Prime customers through its app "Prime Now". It’s rapidly expanding service across the United States with, as of this writing, restaurants in Chicago, Seattle, Los Angeles, San Diego, Baltimore, Austin, and Portland, OR.

Caviar, as the name suggests, reached out to restaurants that might be considered high-end, and it has the most intriguing choices (including those hard-to-reserve restaurants). It’s currently in 15 cities, including all of those Amazon covers (with the exception of in Austin), plus New York City, San Francisco (and the rest of the Bay Area), Philadelphia, Dallas, Boston, Sacramento, Miami, and Washington, DC. This website is at www.trycaviar.com.
Photo courtesy of DoorDash

DoorDash is in 22 markets across the U.S. and Canada and offers a mix of restaurants and take-out food places (fast food, bakeries, make-your-own salad stores, Taco Bell, KFC, and the like). It has a sliding scale for pricing, depending on how far you are from the restaurant you pick. DoorDash is both a website and an app.

Postmates offers restaurants in the major cities of 26 U.S. states, and has a real range of offerings—everything from Aunt Aune’s Pretzels to restaurants where star-chef Marcus Samuelsson is at the helm. This one's a website only, but its design is responsive.

UberEats uses Uber drivers to act as delivery personnel. It was tested in Toronto and is rolling out to the rest of North America. You’ll know if it’s where you happen to be when you push the little dinner plate icon at the top of the app. If it’s available in your neck of the woods, you’ll see food choices, which vary greatly from city to city and from day to day. It will soon be a standalone app, too.

Tips for using these services: