Thank you for subscribing!
Got it! Thank you!
Home›Trip Ideas›Food and Drink›Georgia—A Country Where the Wine Has Been Aging for 8,000 Years 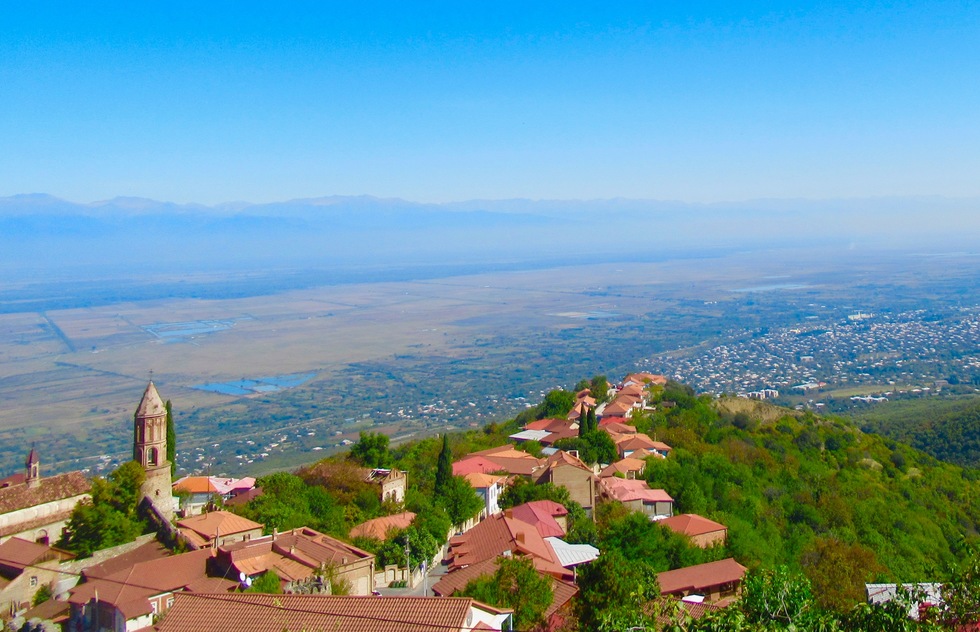 Georgia—A Country Where the Wine Has Been Aging for 8,000 Years

A culinary exploration of the former Soviet republic’s wild flavor combinations and ancient recipes would be a highlight of any food lover’s to-do list.

It’s taken eight millennia, but the ancient nation of Georgia is finally gaining the admiration of the world’s travelers.

Keeper of the oldest winemaking tradition on earth, and blessed with a Mediterranean-like climate (thanks to its location between the Caspian Sea and Black Sea at the base of the Caucasus Mountains), Georgia is an unexpected horn of plenty at the crossroads of Asia and Europe.

Nothing crystallizes the importance of Georgia’s food and wine traditions more than a supra, a leisurely banquet among friends and family, led by a toastmaster, called a tamada. To see what the fuss was about among my foodie friends back home, I joined a supra at Azarphesha, an authentic, wine-focused Georgian restaurant in Tbilisi, the capital.

A Supra With A Tamada

Because Georgia is not an easy destination for individual travelers, I have traveled with a small group on a trip organized by Wild Frontiers and Carla Capalbo, the food writer whose Tasting Georgia (Interlink Books) delves deep into the nation’s culinary heritage. As we nibble on red peppers in a garlicky walnut paste, we're joined by Luarsab Togonidze, co-owner of Azarphesha and our tamada for the evening.

Togonidze pours us generous glasses of Rkatsiteli, a regional white wine, crisp and peachy, not unlike a Petit Chablis. Candlelight flickers on black-and-white family portraits and Togonidze’s collection of antique drinking vessels, which decorate the restaurant.

In a nod to Georgia’s strategic location on the ancient Spice Route, dishes are rich in powdered marigold, blue fenugreek, freshly ground coriander, and dried barberries, all commonly used in Georgian cooking.

Togonidze knows our Wild Frontiers group was setting out on a food-and-wine tour of his homeland, so he raises his cup. “Georgians are happy when connected to the family,” he says, with a deep and sonorous voice, “but even more so when they also have guests. It’s great to connect with wonderful people. This is to you: Have a safe and wonderful journey.” 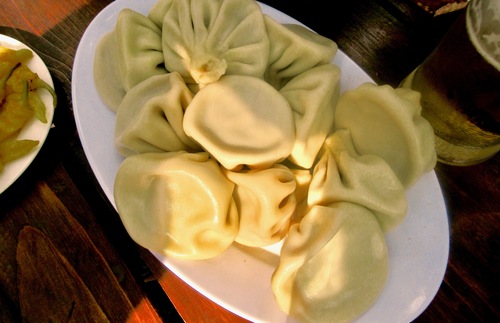 There may be no better environment to understand Georgia’s natural bounty than a market. Bodbiskhevi Bazaar is a colorfully chaotic one held Sundays in the Kakheti Valley, 75 miles east of Tbilisi.

It’s an unparalleled sensory experience. The cacophony is unnerving, the colors radiant, the scents fragrant or stomach-churning, depending on where you stroll. The riches of Georgian agriculture are on riotous display: green apples and speckled brown eggs, bloody offal spread out on plastic shopping bags, cabbages the size of soccer balls, cackling poultry, spongy sheep’s cheese, fruit, vegetables, and mounds of dirt-encrusted potatoes.

Most of the sellers set up shop on dusty paths or in iron-roof sheds arranged in long rows across the otherwise barren hillside that slopes down to the town of Tsnori. Goods are displayed on rude wooden counters or spread on the ground in cardboard boxes. It’s an olfactory attack—the gruesome stench of the butchers, the sharp aroma of the cheesemongers, the musty, soil-rich smells of the vegetable farmers.

And the noise, the noise! The meat cutters are loudest of all, shouting over the whacks of their hatchets on butcher blocks. In stalls of their own, the vendors of household goods speak almost in whispers. The sounds of the vegetable purveyors and cheese merchants fall somewhere in between.

Some of the peddlers have huge inventories—displays of bright candies or hot peppers, presented with pride and even some artistry. Others have so few goods they might have carried them all in their arms, like the man I see shooing flies away from the seven skinny plucked pullets displayed on a folding plastic table, or the gold-tooth bruiser with two live turkeys tied to the bumper of his rusting, lopsided Lada. 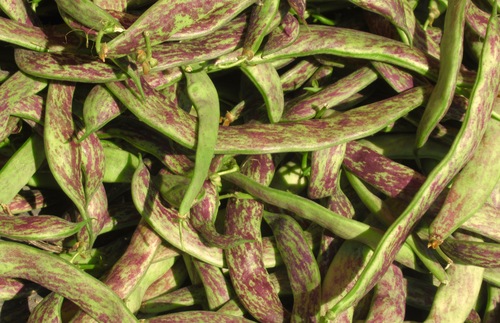 Food is only half of Georgia’s culinary culture—and possibly not even the most interesting half.

Wine has been made in Georgia for an estimated 8,000 years, longer than any other place on earth. What makes the viniculture unique (besides a long list of grape varieties unknown to most Westerners) is its fermentation method—below ground, often including stems and seeds, in a massive egg-shaped, beeswax-lined clay vessel called a qvevri (pronounced kway-vree). The tradition was even canonized on the UNESCO list of the Intangible Cultural Heritage of Humanity in 2013.

“Now that they have the UNESCO designation, there’s an obsession for qvevris, and not just in Georgia” says our local guide, Irakli Tsobekhia. “Even winemakers from Spain are coming to Georgia to buy them.”

To learn more about this traditional method of wine-making, we visit Zaza Kbilashvili, a fourth-generation qvevri maker whose atmospheric basement workshop in the town of Telavi is dark, dusty, almost medieval, and full of half-completed jugs, each large enough to hold a full-grown man. He makes 40–50 qvevris a year using the coil-and-layer method, all constructed by measuring with hand and eye, 10 inches thick, no machinery involved. Each finished pot weighs as much as two tons, and requires up to 10 men to move it into the backyard kiln for firing. Only when the qvevris achieve a certain coloring, based on Kbilashvili’s experience, are they removed and sold.

“I’m often visited by professors who say the qvevris have good health qualities, good for the circulatory system, the digestive system, and reducing cholesterol,” says Kbilashvili. “Wherever you are, it’s healthy to drink qvevri wine." 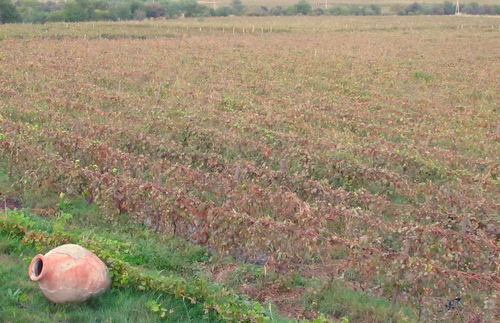 Despite its lengthy history and unique traditions, Georgian wine was transformed—and not in a good way—when the country was under Soviet rule from 1921 to 1991. Instead of small, independent wineries following age-old fermentation methods, charmless factories churned out low-quality, semi-sweet bulk wine to be consumed by the Russian masses to Georgia’s north. But after independence, the true believers raised their colors.

Consider Iago Bitarishvili, whose small winery near Mtskheta north of Tbilisi is recognized as among the first of the “new” traditional wineries in Georgia. Bitarishvili looks at me and indicates the open end of a qvevri set into the floor of his intimate winery. “If you place your hand here,” he says, “you can feel it’s very warm.”

That’s from the natural process. He stirs up the mixture (crushed Chinuri grapes) four or five times a day for several weeks. After everything settles, he lets the wine sit for six months. “But our real work is in our vineyards,” he says, “because in the fermentation process we can do nothing.”

John Wurdeman, an American with roots in New Mexico and Virginia, is an artist, ethnographer, and, for the past 12 years, a wine-maker. His Pheasant’s Tears winery near Sighnaghi, in the Kakheti Valley, his seven vineyards around the country, and his five restaurants (including Vino Underground, one of Tbilisi’s first wine bars) make him a herald of Georgia’s culinary future.

“We started Pheasant’s Tears in 2006 using only Georgian grapes,” he says. “We used qvevris. We wanted to do what most others weren’t doing.” Even today, wine made in qvevris represents only about 1% of Georgia’s wine output.

Wurdeman proposes a toast “to love.” As if in honor of it, baked carp from the nearby Alazani River comes out, along with a more robust Chinuri in which the skins have been left on the grapes for one month (usually referred to in Georgia as “orange” wine because of its amber color) and which has hints of saffron and dried fruit.

Fresh-baked bread is brought to the table along with a one-of-a-kind wine blend of 417 grape varieties Wurdeman calls Poliphonia, a fruity, full-bodied red wine named for the multi-voice harmonic singing style unique to Georgia.

The evening continues with more toasts (“To diversity!”), more traditional dishes  (veal heart and liver meatballs in an emulsion of yogurt and pomegranate juice; pork roasted over grapevines), and more wine (a dry, red Tavkveri and a full-bodied, delicious 10-year-old Saperavi, so dark it was almost black).

“To friendship,” says Wurdeman, raising a glass as the evening comes to a reluctant close. “That which you give to others is yours for eternity. That which you keep to yourself, you have already lost.”