Thank you for subscribing!
Got it! Thank you!
Home›Trip Ideas›Food and Drink›Wine Country Report: Despite Fires, Napa and Sonoma Visitor Experience Is Undamaged 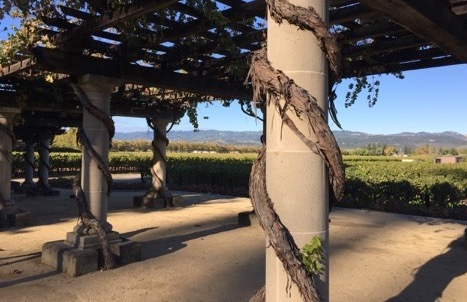 The deadly October wildfires in Northern California’s beloved wine country caused a lot of damage. But they didn't change tourism as badly as feared.

Napa Valley and Sonoma Valley wineries are open and back in business, welcoming visitors to their vineyards and tasting rooms. The smoke has cleared, the air is clear, and the vines are showy in their fall colors.

In early November, which is usually a fairly busy season, wineries, resorts, and restaurants were reporting visitor numbers off by 75% or more. But as the "open for business" message spread, there have been signs of slow recovery.

Tourism is essential to the economy in Napa and Sonoma wine country, located just an hour north of San Francisco. Visitors who stick to the established winery trails will encounter few traces of the damage done by fast-moving, windswept flames that produced a humanitarian crisis in the more developed areas nearby.

Touring After the Fires

A little over 5% of the the land in Napa, Sonoma, and Mendocino counties burned. Blackened sections of forested land can be spotted in the distance from the main roads along the top of the Mayacamas Mountains to the west and north of Napa Valley. Locals point to spots where fires jumped across a highway or claimed Sonoma’s 100-year-old Stornetta Dairy and its Bee-Well Farms.

But fortunately in wine country, the fires were mostly contained to the wooded hillsides. In the valleys, the vines tend to be planted in such a way as to slow fire’s spread, and they hold enough moisture in early fall to serve as firewalls throughout most of wine country’s acres. Most barrelled vintages were stored in places where the smoke did not reach.

Out of around 600 wineries and tasting rooms in the region, only about 27 suffered notable damage, and most of those suffered loss to landscaping and outbuildings rather than to the core structures that welcome visitors.

Most of those were not major tourist stops, and some, like Paradise Ridge, maintain tasting rooms or vineyards located away from the damage so they can keep going or start over.

The Hilton Sonoma Wine Country Hotel in Santa Rosa was close to a developed area and it burned down, but most other hotels remain unaffected.

Recovery has been swift. At Darioush Winery on the Silverado Trail, much of the landscaping has already been replanted, although several singed olive trees and a circle of blackened palm trees stand as testament to the proximity of the flames. Inside the cellars, a slightly smoky smell is still noticeable, but there are high hopes for the stored vintages.

At Domaine Chandon in Yountville, a popular stop on many tours, visitors still enjoy hilltop sunshine on Adirondack lawn chairs. At this estate, where premium sparkling wine is created by the luxury French Champagne house Moët et Chandon, the only mention of smoke was the smoked salmon hors d’oeuvres served to accompany a flute (or two) of bubbles being poured for guests on tour.

Many vintners are donating some or all of their tasting fees to local disaster relief charities.

The visitor experience in Northern California’s prime wine country hasn’t dramatically changed, but that doesn’t negate lingering concerns about the future of wine production and tourism that are the lifeblood of the region.

Due to smoke taint that may have been suffered by 10–15% of the grapes still on the vine (mostly cabernet sauvignon and merlot), some growers have opted to discard that portion of their fruit, while others await test results on these thick-skinned red grapes.