Thank you for subscribing!
Got it! Thank you!
Home›Trip Ideas›National Parks›Arizona in Technicolor: National Parks Beyond the Grand Canyon 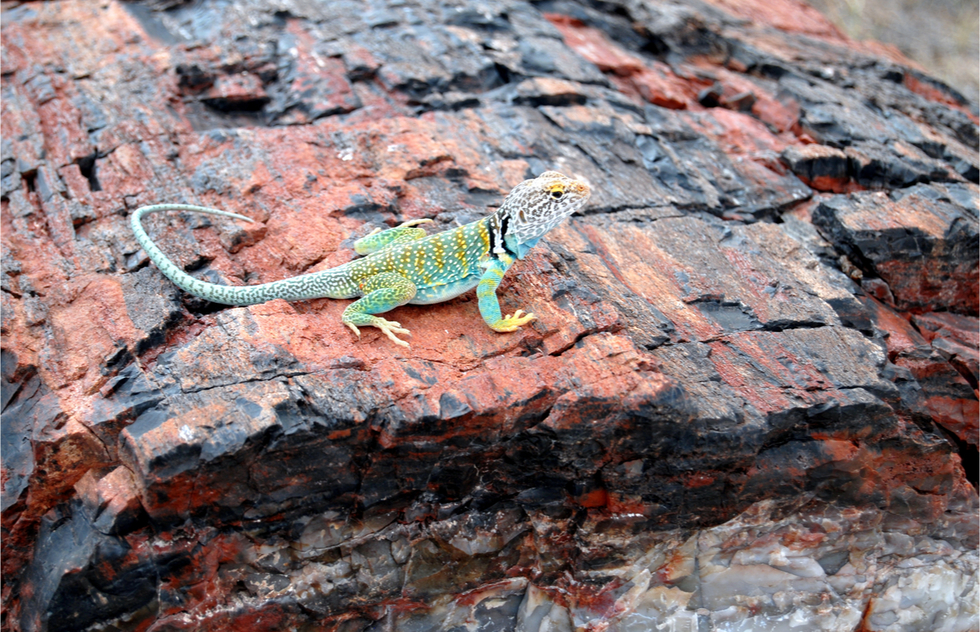 Arizona in Technicolor: National Parks Beyond the Grand Canyon

The Petrified Forest and Saguaro National Parks offer visually stunning landscapes and an opportunity to explore some of the most impressive geological sites in the country—without the crowds.

While hundreds of thousands of tourists flock to the Arizona side of the Grand Canyon each year, fewer venture to Arizona's other remarkable national parks -- Petrified Forest and Saguaro, especially during the heat of the summer months. Both parks offer visually stunning landscapes and an opportunity to explore some of the most impressive geological sites in the country.

Petrified Forest is not so much a forest as it is an ancient tree graveyard. The park is home to the world's largest and most colorful concentration of petrified wood, the multi-hued badlands of the Painted Desert, historic structures, some 500 archaeological sites, and fossils dating back in excess of 200 million years. Each day in summer there are a number of short, 20-minute free ranger-guided walks within the park including the &frac13; mile Puerco Pueblo Walk which begins at both 10am and 2:30pm at the Puerco Pueblo Trail at the south end of the parking lot; the 11:30am Triassic Park Walk or Talk which begins at the Rainbow Forest Museum sunroom and goes along the Giant Logs Trail; and the Painted Desert Inn Tour at 1pm.

In the northern area of the park, you will find a part of Arizona's Painted Desert, a badlands of multi-colored rock formations. The landscape is reached on foot on one short trail along a cliff edge. From various vantage points and scenic lookouts visitors can observe patterns of bright colors in the soft sedimentary rocks. At sunset, these colors seem amplified due to the existence of hematite (red), limonite (yellow) and gypsum (white). In the south part of the park, you will find Puerco Pueblo, an ancient Native American site made up of the remains of dozens of rooms around a central plaza, and Newspaper Rock, a sandstone outcrop with hundreds of petroglyphs dating from around 1000-1300 AD. There are more petroglyphs along a short side track close to the south edge of the park starting from Giant Logs Museum, but the main attraction in the southern section of the park is the petrified wood itself. Although it may be tempting to pick up souvenir rocks and fossils within the park as a memento of your visit, be aware that you will receive a hefty fine if caught.

As there is no in-park accommodation at Petrified Forest, most visitors choose to stay in the nearby historic ranching town of Holbrook, located roughly 30 miles from the northern entrance to the park. There are close to 20 predominantly chain hotels/motels located here, a few mom and pop places, plus a handful of RV parks and campgrounds and one bed and breakfast.

If you've ever seen one of those incredible sunset photos featuring the quintessential Saguaro cactus set against a burning orange and red twilight sky, chances are it was taken in Arizona's Saguaro National Park. The cacti themselves, the symbol of the state of Arizona, can grow as high as 45 feet and the park offers the greatest concentration in the state of these icons of the dessert. The park starts in the Sonoran Desert and continues through the High Alpine Forest to the Rincon Mountain. The Rincon Mountain District and the Tucson Mountain District are 30 miles apart, with the city of Tucson in between. The north and west area of the park are generally quite flat with uninterrupted views of forests of the huge cacti, while the land becomes more undulating and mountainous as you approach the south and east, rising to a high point of 4,687 feet at Wasson Peak. Here the temperatures are lower and the landscape is covered with grass and bushes rather than cacti. Apart from the saguaro itself, there are some 50 other species of cactus present in the park plus a variety of succulents, desert plants and wildlife. Peak visitation season is from the fall through to early spring, so during the summer months Saguaro National Park only offers interpretive programs and guided tours on an intermittent basis. The Red Hills Visitor Center can provide updated information about current programs (tel. 520/733-5158).

Because Saguaro is located so close to Tucson (a mere 15 miles west), many people choose to base themselves there and do day trips.