Thank you for subscribing!
Got it! Thank you!
Home›Trip Ideas›Outdoor & Adventure›Getting Around in Coastal British Columbia: Ferries, Seaplanes, and Boat Tours 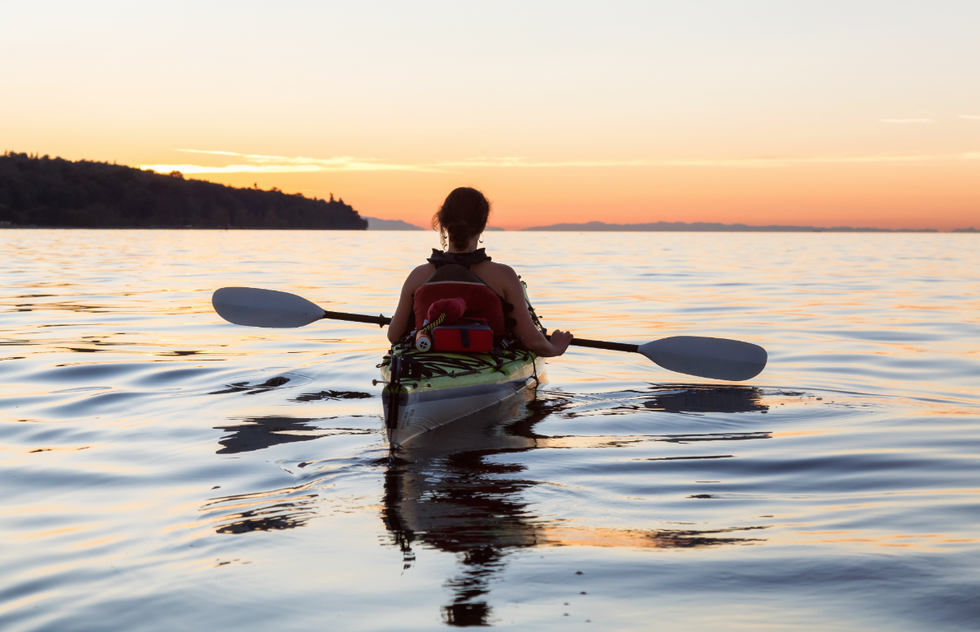 Getting Around in Coastal British Columbia: Ferries, Seaplanes, and Boat Tours

On British Columbia's Sunshine Coast and Vancouver Island, getting from point A to point B is an adventure.

As we sipped a nice Okanagan Valley sauvignon blanc and enjoyed a fiery sunset over a quiet cove in Madeira Park, British Columbia, my husband remarked, “We are so far from home.”

The observation was indisputably true—we live in Italy—but the comment had less to do with distance than the remoteness of our surroundings.

Though located just two and a half hours from Vancouver, this cluster of small towns around Pender Harbour is hard to get to—mostly because of geography and the region’s history as a place where life has always been lived on the water.

Tooling around this part of southwestern British Columbia, known as the Sunshine Coast, or getting from here to Vancouver or Vancouver Island requires time, patience, and more than one mode of transportation. And it almost always involves being on, over, or within sight of the Salish Sea, the mighty intercoastal waterway that defines life in these parts. 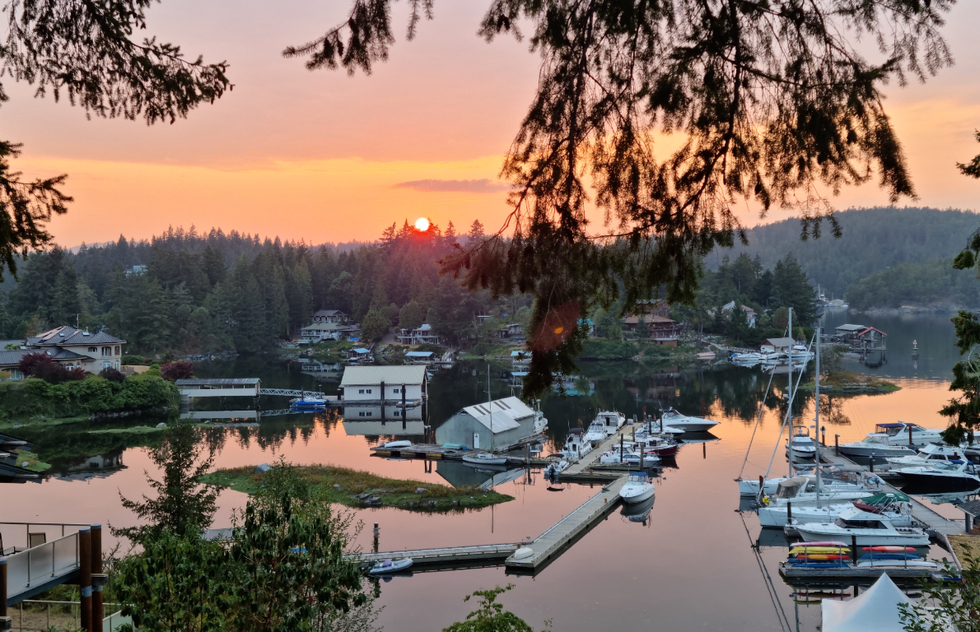 The kayaks, stand-up paddleboards, dinghies, Sunfish sailboats, and motorboats at private and public moorings all around the harbor remind us that, through thousands of years of First Nations history and 150 years after European arrival, the sea is still the artery that connects everyone and everything here.

“The settlements were here long before the road was,” our guide Cherie explains as she gently maneuvers us in and out of the coves of Pender Harbour on a SloCat Harbour Tours pontoon boat. Harbor seals pop up here and there to see what we’re up to, loons dip in and out of the water, and other boaters in similarly slow-moving vessels wave as they pass.

The road Cherie references is the Sunshine Coast Highway (aka British Columbia Highway 101), which runs from Langdale in the south up to the literal end of the road at Lund. The 100-mile route meanders through grand expanses of rainforest and past lakes and countless coves, with the sea never very far away. The journey includes one 50-minute ferry ride, which, if not timed right—don’t ask me how I know this—might involve a long wait for the next boat. 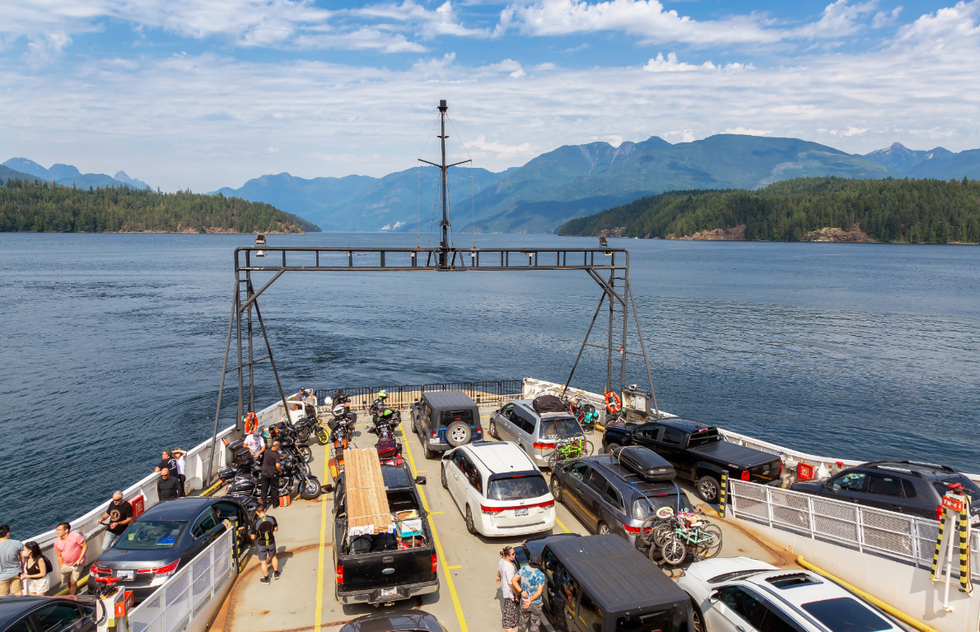 Ferry service in British Columbia is through BC Ferries, which offers dozens of year-round and seasonal routes up and down the coast and Vancouver Island. Vehicles, foot passengers, bikes, and pets are permitted. Some routes need to be booked in advance and some cannot be booked in advance, so be sure to consult the website carefully when planning your journeys—and keep an eye on those timetables.

The Sunshine Coast Highway connects small towns where populations number in the hundreds and a homegrown cafe might be the center of the action. There are regional parks with a network of trails allowing even the most casual hikers to leave civilization behind and get immersed in dark primeval forest filled with thorny ripe berry bushes, beds of ferns, waterfalls, and babbling creeks that teem with spawning salmon in the fall. Signs advise of recent bear sightings.

Elsewhere, a beachfront park might appear from a gap in the woods, offering picnic areas, a playground, or a fishing pier—and yet another chance to spy harbor seals or a passing bald eagle. 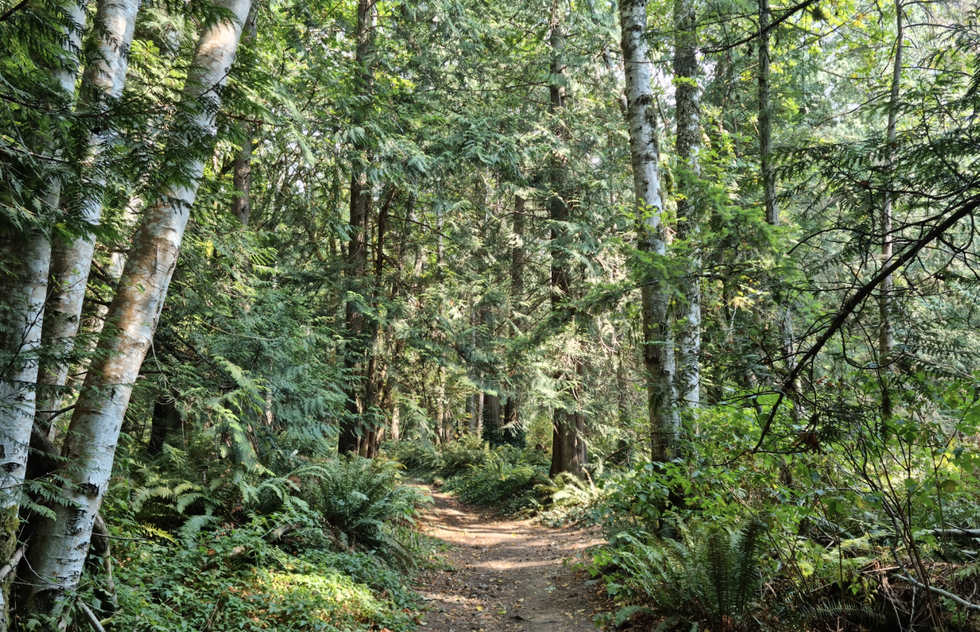 Another ferry ride away is Vancouver Island. The 90-minute connection runs between Comox on the island and Powell River on the Sunshine Coast.

Given that nearly a million people live on Vancouver Island, the Inland Island Highway (Highway 19) is busier than the Sunshine Coast Highway. But here, as to the east, the sea and the forest are never far away, and even relatively populous areas such as Courtenay and Comox still feel close to nature.

And opportunities for getting on the water remain plentiful. Down in Victoria, the provincial capital of British Columbia, we went looking for whales with Eagle Wing Whale & Wildlife Tours and later tucked into fish tacos from Red Fish Blue Fish while stationed on a wooden pier. 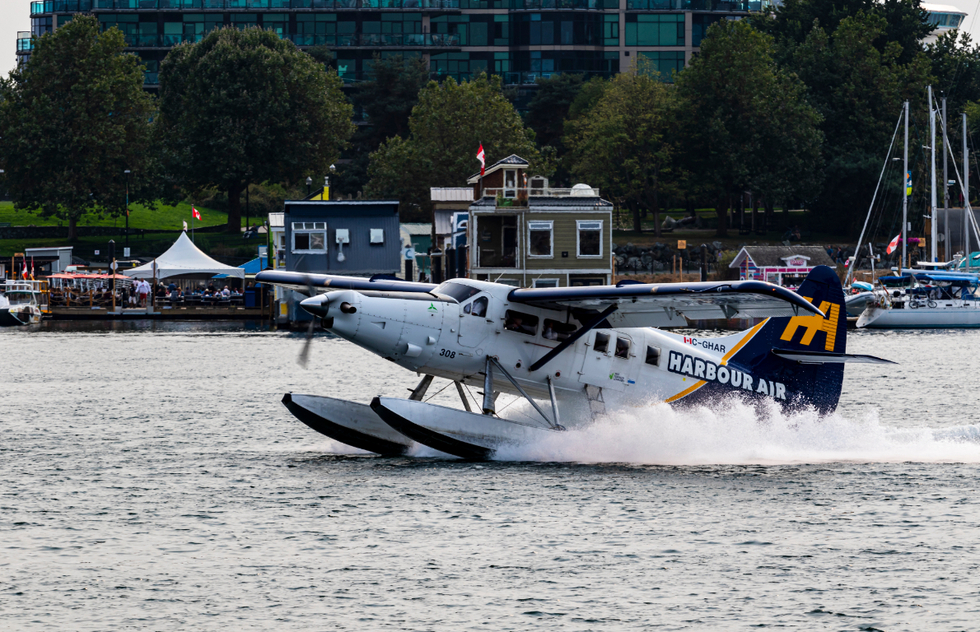 Seaplanes—often called floatplanes here—buzz overhead all day in Victoria and Vancouver, thanks to frequent daily flights from commercial operators connecting the cities to towns across the coast and island, including remote locations like Tofino and our little haven of Madeira Park. We watched planes lifting off and deftly splashing down at every harbor, delivering tourists as well as commuters.

Now, we’ve had little cause for envy on this trip. British Columbia has ticked all the boxes of monumental scenery, multiple marine mammal sightings, vibrant cities and cozy small towns, ample opportunities for outdoor adventure, and lots and lots of excellent, regionally sourced cuisine.

But watching seaplanes come and go made me long to take flight. For regulars, I’m sure the experience is about as exciting as catching a bus. But that’s part of the appeal this wild and woolly region has for visitors: Even ordinary modes of transport feel like thrilling adventures.

You can bet I’ve put a seaplane flight on the top of my list for next time.

Seaplane/floatplane services are offered by several companies, including Harbour Air, Seair Seaplanes, and Gulf Island Seaplanes. These flights are seldom the most economical way to get from one point to another, but they dramatically reduce travel time, especially to destinations reachable only by ferry.

Where to stay and dine in the region: Painted Boat Resort Spa & Marina is where we caught that memorable sunset in Madeira Park. Condo-style units all have full kitchens and outdoor decks. There’s an excellent restaurant on site. In Powell River, Coastal Cookery is a great choice for lunch or dinner. In Courtenay, the charming Old House Hotel is an all-suites property with a lovely rustic eatery and resident bunnies. In Victoria, we watched floatplanes take off from our patio at the cheerful Inn at Laurel Point, which is located a short walk from the city center yet a quiet distance away.