Thank you for subscribing!
Got it! Thank you!
Home›Trip Ideas›Outdoor & Adventure›Shredding the Slopes in Nicaragua: The Thrill of Volcano Boarding 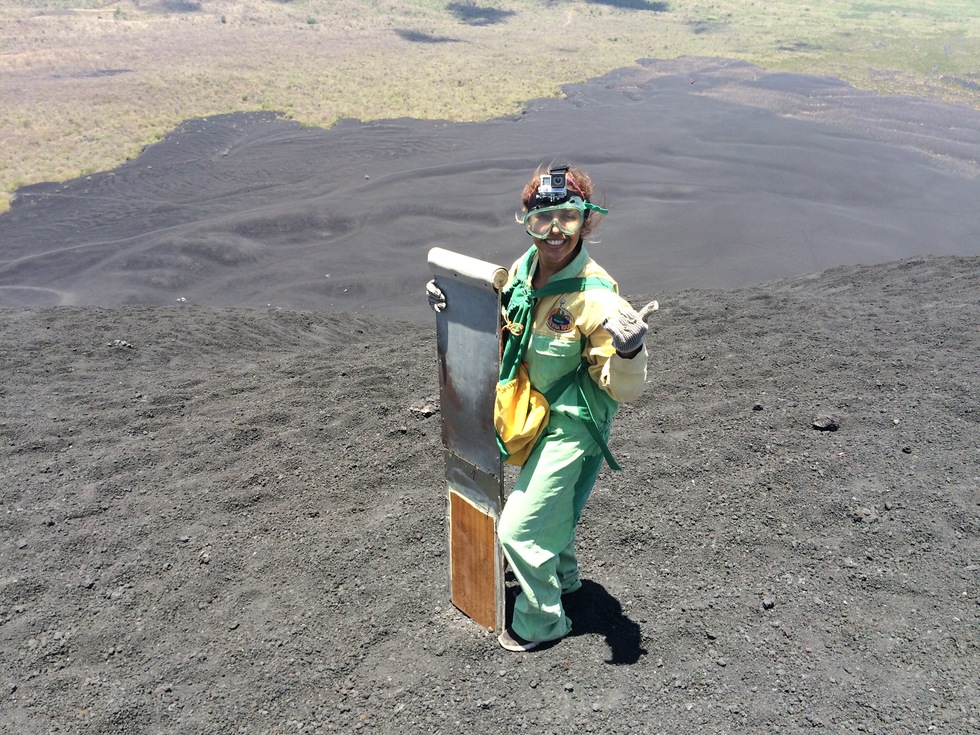 Shredding the Slopes in Nicaragua: The Thrill of Volcano Boarding

In Nicaragua, you can go surfing or sledding down the side of an active volcano at 40 miles per hour. We had to try it out.

When planning my trip to Nicaragua, I expected that I would explore towns, immerse myself in Latin American culture, and lie around on pristine beaches.

But little did I know, I’d also find myself boarding down an active volcano.

Just outside the city of Leon stands Cerro Negro (Black Hill), the youngest volcano in Central America. A 2,388-foot peak covered with grains of black rock, it has erupted 23 times—most recently in 1999. Why not surf down it?

Here’s how this pastime came to Nicaragua.

In 2004, a brave soul named Daryn Webb became determined to ride down the side of Cerro Negro. His first attempt was with a mini fridge, second with his mattress, and third with his front door. These failed efforts eventually led Webb to construct a wooden board mounted on a sheet of metal—a creation that travelers from around the world now pay to stand or sit on as it hurtles down the hill.

Being the adrenaline junkie that I am, I booked a tour to Cerro Negro with Vive Travels for $160. The volcano is about an hour's drive from Nicaragua’s second largest city, Leon.

Once my group got to the volcano, we strapped our boards to our backs and hiked up a slope covered in loose black rocks. The hike takes about an hour, but can last longer depending on how gusty the winds are.

And they can get extremely gusty.

At the top, I had to crouch down against the wind as I walked along the rim of the volcano, holding tightly onto the rope that’s planted up there for safety purposes. The key things to remember: stay low, hold on, and don’t worry about how slow you’re walking—it’s a struggle for everyone and definitely not for the faint of heart. When I looked down below, into the volcano’s crater, I could see steam seeping from the ground. Did I mention that the volcano is overdue for an eruption? 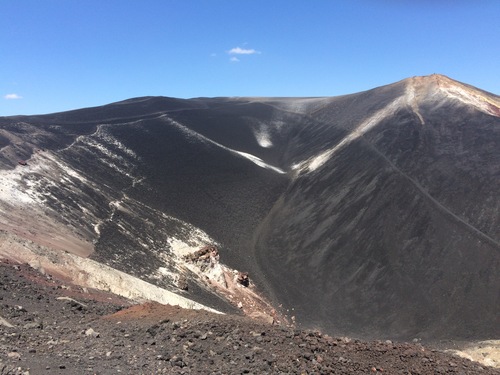 Cerro Negro volcano in Nicaragua (photo by the author)

After finally making our way through what felt like a windstorm—on the rim of a volcano, no less!—we arrived at the 1,500-foot slope we would board down. We opened the backpacks we were given along with our boards back at the bottom, and each of us found a jumpsuit, goggles, and leather gloves for protection.

There are two ways to volcano board: standing up (the snowboard method) and sitting down (the sled method). Though standing up would look pretty rad in photos, I opted to sit down for a more enjoyable experience. Something you should keep in mind: No matter which method you choose, you’re not in for a smooth ride. Instead of gliding over snow, you’ll be bumping over multitudes of little rocks. Expect lots of friction.

Once I was all suited up, I was eager to be one of the first victims. Then I looked over the edge and saw the steepness and length of the slope. The guide reassured me that I could control my speed simply by putting my feet down. 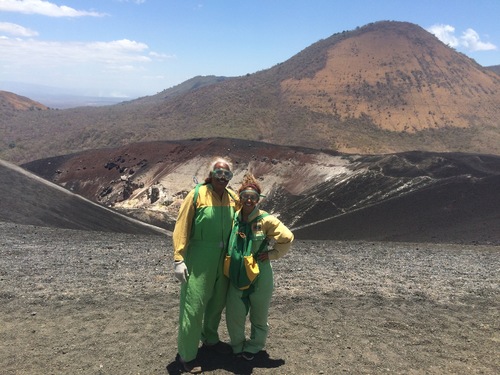 All suited up (photo by the author)

I closed my eyes, envisioned how memorable this experience would be, and took the plunge. Sitting down, I grabbed onto the rope attached to the front of the board like reins, and leaned back.

The ride down can reach speeds of around 40 miles per hour and lasts about five minutes. I had to remember that this, like any other sport, could lead to injuries if I wasn’t careful. Fortunately, the slope is not a sharp, 90-degree drop.

Things started slow as I went over a couple mini hills, prepping me for the last bump before a steeper decline. Early on is a good time to make adjustments in your seat and practice planting your feet in the gravel to brake. Try to come to a gradual stop—if you brake too fast, you could end up face-planting, just as a sudden stop on a bicycle can send you over the handlebars.

After my preliminary adjustments, I took off! Zooming down the hill, I could hear wood crunching rock and see gravel scattering all around. If you’re able to look past the flying pebbles and maintain your steering, it’s a pretty cool view. At a distance I could spot hills and greenery, while closer up I was descending into a black blob of volcanic sand toward the tiny speck of white that was the tour van (and my finishing line).

I made it there in one piece. I didn’t crash. I didn’t break any bones. I didn’t leave with battle wounds of any kind. In fact, the most anxiety I felt during the whole thing was while trying to get to the actual slope.

And the rush that comes from the ride definitely makes up for that. I mean, come on—how many people get to say they’ve boarded down a volcano? 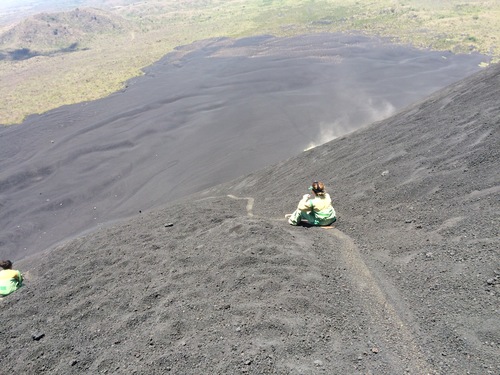 The descent (photo by Hazza Al-Hazza)

Volcano boarding at Cerro Negro can be booked through various companies, including Vive Travels.