Thank you for subscribing!
Got it! Thank you!
Home›Trip Ideas›Road Trips›Get Your Kicks on Route 66 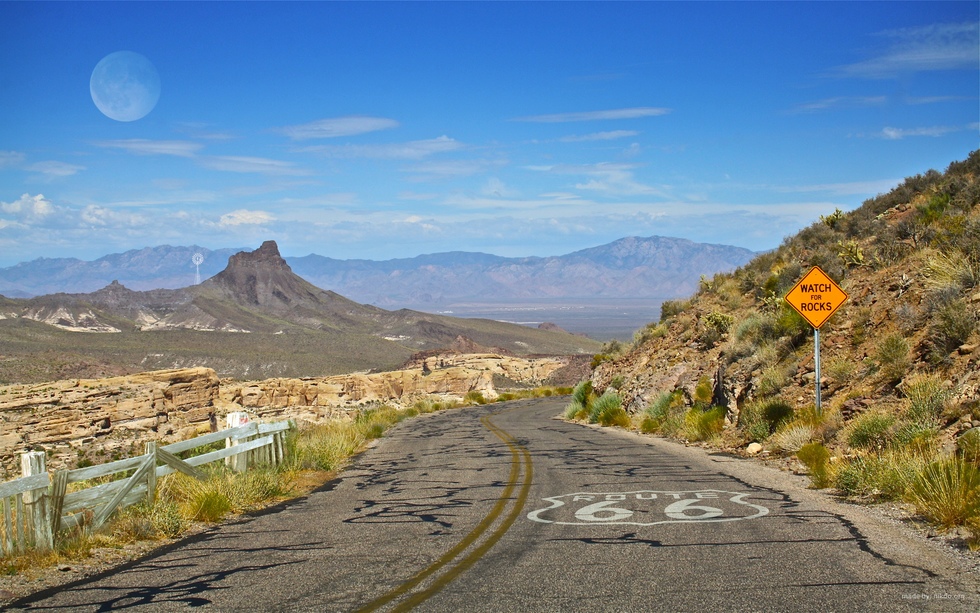 Get Your Kicks on Route 66


Every fall for 13 years, ramblin' men (and gals) from all over the world have gathered in Springfield, IL for the International Route 66 Mother Road Festival. Next weekend, Kingman, AZ will throw its hat into the ring with a festival of its own, where 250 volunteers from the community will host a program of concerts, speakers, and exhibitions celebrating the history and culture of a road once known as the Main Street of America. In anticipation of this year's festivities, I spoke to Jim Hinckley, author of over ten books on Route 66 and an upcoming Kingman festival speaker, about the beloved American tradition of road tripping and the future of the route that started it all.
"It's like a family reunion," Hinckley said of the gathering, which will bring together seven of the eight Route 66 associations as well as representatives from as far as Germany and the Czech Republic. Over the years, Route 66 has become a symbol of America not only in the eyes of Americans themselves but also for people of other nationalities. Hinckley mentioned Zdenek Jurasek, founder of the Czech Route 66 Association, who will speak at the festival about growing up in a communist country and listening to Radio Free America.
"More than the statue of liberty, Route 66 and rock and roll symbolized freedom," said Hinckley. "It's amazing how this road transcends languages and cultures."
Jurasek is currently working to establish Europe's first Route 66 museum and international festival.
It's this same allure of freedom that continues to inspire millions of drivers to traverse the 2,400-mile expanse, which stretches from Lake Michigan all the way to iconic Los Angeles and the shores of the Pacific. Though aspiring road-trippers may approach the journey differently today, Hinckley insists its essence is the same.
"The sense of adventure, the open road: it has a different meaning for different people."
But the times, they are a-changin', and while people still gravitate toward the road trip as a vacation, those people have lately been reflecting an interesting demographic trend:
"The younger generation under 25 is really showing a marked drop in interest and even automobile ownership," said Hinckley. As the percentage of vehicles sold to consumers aged 18 to 34 decreases with each year, one has to wonder if the car still represents freedom and rebellion to today's plugged-in youth.
Perhaps the road trip's perceived irrelevance is what prompted the festival's theme: Crossroads of the Past and Future. Members of the electric vehicle community including Tudor Melville of Tesla and Jerry Asher of Plugshare have been invited to speak about the growing role of electric cars and sustainable energy in American car culture, while conference participants will discuss the dual challenges of preservation and promotion facing the Route 66 community today. Hinckley is hopeful that this year's festival will give way to a larger-scale convention in 2015 to address these issues as the U.S. Highway 66 Association once did during its existence from 1927 to 1976.
Whether or not road trips retain the same significance today as they did during their heyday, the highway's rich history is large part of its present-day appeal to tourists, and it represents an essential facet of American cultural heritage.


"It's no longer just a highway," said Hinckley. "It has become a living, breathing time capsule, with just a hint of Disneyland. It's like colonial Williamsburg [in Virginia] or Greenfield Village in Dearborn [MI]. It has become a living history museum of America from the 20th century."
Visitors can see this living history reflected in establishments along the way, from the Ariston Café in Litchfield, IL to Clayton's Café in Vinita, OK, both of which are run by the families that opened them in the 1920s, around the time of the route's conception.
Tourism has also spurred the renovation of condemned motels and trading posts, which had become rundown over time but remained classic stops on the route. The Wagon Wheel motel in Cuba, MO and the Blue Swallow in Tucumcari, NM have both maintained a retro aesthetic but have since been restored to include modern comforts and conveniences.
Hinckley's advice for future freewheelers? Embrace the past.
"One of the best things about Route 66 today compared to its quote 'glory days' is you can literally have your cake and eat it too," he said. "You can drive across the Mojave Desert in air-conditioned comfort…but if you can't relax unless you have a Holiday Inn Express, you probably won't enjoy [what Route 66 has to offer]."
Figuring this a good opportunity to get some valuable travel advice from a road trip guru, I had to ask whether he was biased toward a particular stretch of the road. Hinckley, like any sane person, had trouble picking just one. But if you're cruising Route 66 anytime soon, keep your eyes peeled for the pre-1952 alignment of the road from Kingman to the Colorado River in western Arizona.
"It's hands-down the most gorgeous section of the road there is," Hinckley admitted.
Kingman's festival will take place from August 14 to 17, and Springfield will celebrate the weekend of September 26. If you want to make it, you'd better hit the road soon.
Road Trips