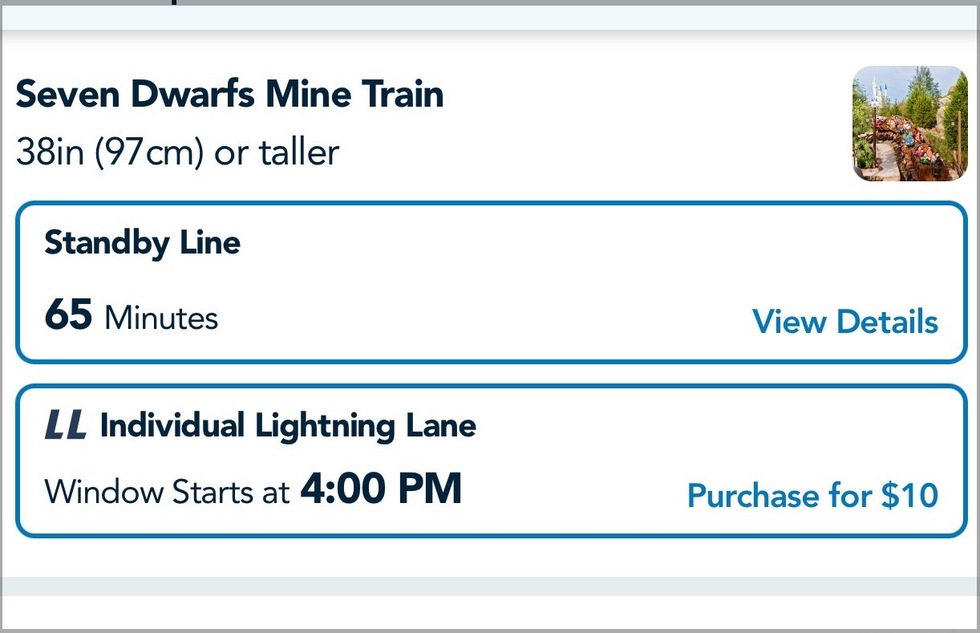 Lightning Lane, Disney's new automated system that charges visitors extra to jump the line, has debuted at Walt Disney World. Here's what observers learned about how it works (and doesn't work).

Walt Disney World, the resort destination that is home to four of the 10 most popular theme parks on the planet, has changed the way guests get to the front of the line for rides. Free FastPass is no more. To wait in the shortest lines at Disney, now you have to pay.

As of Tuesday, October 19, there are three ways you can wait in line for attractions at Walt Disney World in Orlando.

First, there's the Standby queue. This is how the majority of people wait. It's just the main line for the ride.

But pay $15 above the price of admission (almost $16 with tax) and you unlock the Genie+ feature in the Disney World app, which grants you access to Lightning Lane. That's like the former FastPass: a shorter line that can only be joined by appointment. Via the app, you can reserve one Lightning Lane at a time. After you use your appointment, you'll be able to schedule another one, but as more people use the system, the fewer slots are available.

Last, beyond Lightning Lane, there's Individual Lightning Lane. The two most popular rides at each of the four Disney theme parks in Florida are not accessible via Genie+. For their Lightning Lanes, you have to pony up even more dollars. Fees for these eight top-tier rides change by the day, but upon launch they cost as much as $15 (again, plus tax). That's per person, which adds up, so we hope your family didn't need lunch—but you can only book Individual Lightning Lane once per ride, per day.

Confused? You're not the only one. If it's all too much, just wait in Standby with the rest of the groveling hoi polloi. But now that you have a feel for how the Lightning Lane system is supposed to work, does it really work that way?

Fans and journalists have been eagerly road testing the new system, and Disney vacationers will want to know some of the things we've gleaned from their coverage. Whether the new system reduces or exacerbates misery is a something that only time will reveal—but these first-blush observations are important for consumers to know now.

1. It chews through battery life.

Vlogger Kyle Pallo, who files a video report from a Disney park nearly every single day (really!) had already drained his iPhone's battery by 30% before the park even opened to the public. He posted recordings of his smartphone screen as he tried to navigate the glitchy system for the first time.

Pallo also found that if you have a booking for Lightning Lane, you can show up five minutes ahead of your scheduled time and still be allowed in.

When the paid Genie+/ Lightning Lane system was announced, right away we saw red flags—Disney now has a financial incentive to make wait times seem worse than they already are. The longer a line looks, the more likely customers will be to spring for the paid fast lane.

Disney has taken care of that (at least in the legal sense) by forcing customers to agree to disavow the accuracy of its wait times when they use the app. Blog Mickey made the discovery: "In the terms and conditions of Disney Genie+, Disney tells guests to not make a purchase decision based on their posted wait times." 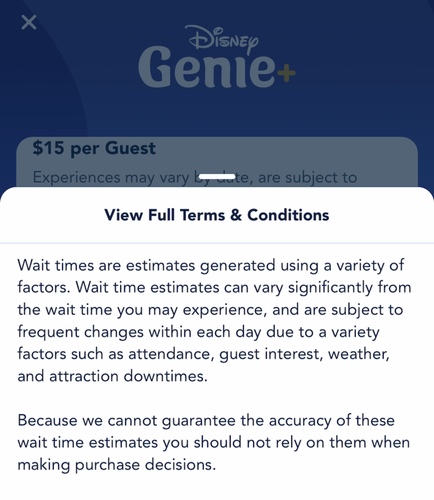 Indeed, journalist Ashley Carter of Spectrum News in Orlando found instances in which the actual wait time was half as long as the app said it would be. 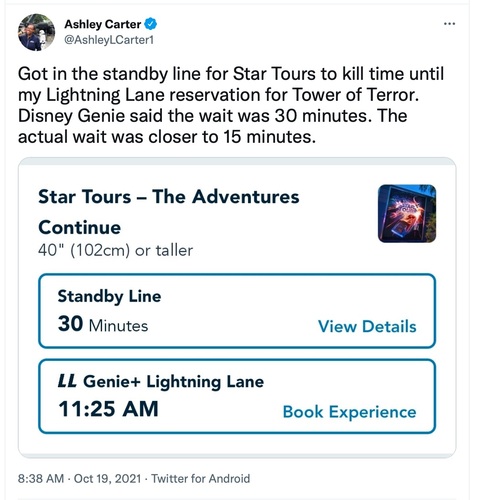 So if you base your decision about whether to pay extra for Lightning Lane off the posted wait time, you could be misled.

Likewise, the most popular rides (such as Epcot's Remy's Ratatouille Adventure) may already operate a Virtual Queue, which is a lottery, held at 7am daily, that gives guests a timed reservation without charge.

But you might never realize that free ride reservation option was available to you—because the ride's page on Genie doesn't say so. Many people will be tempted to pay $9 for Lightning Lane when they could have gotten a booking for free, as observed by Twitter user @Hastin. 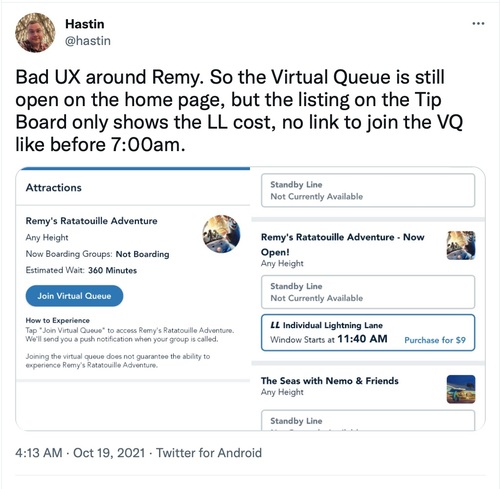 Update: As of October 22, this has been changed, and the Virtual Queue option is now displayed. (Granted, the first drawing happens at 7am, before the parks have opened.)

5. Availability can run out.

Multiple people, including @ParkHoppersShow on Twitter, found that Lightning Lane slots had run out for some popular rides by mid-afternoon for both the Genie+ and Individual options. 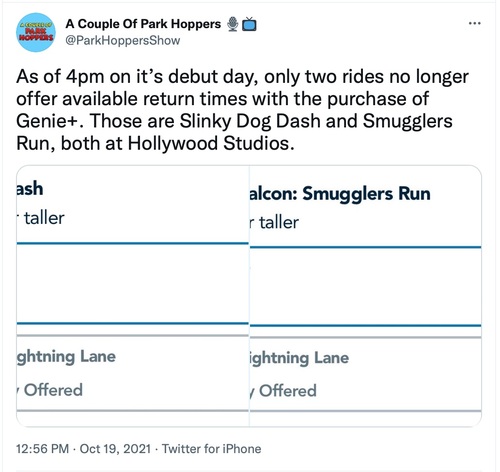 6. Disney aggressively pushes minor attractions in the hopes you'll book them instead of the big-ticket rides.

From an operational perspective, part of Disney's goal for Genie is to spread crowds more evenly across the day. So the app will often suggest guests go to attractions that don't see as much love as the blockbuster rides.

On Twitter, blogger Tom Bricker noticed that the app kept trying to get him to ride the merry-go-round: "No matter what I select or remove from my interests and attraction preferences, Genie keeps recommending Prince Charming Regal Carrousel as my next attraction."

7. The app might fail to complete tasks without explaining why.

Some vacationers might fear that wrestling with an app will devour their vacations—and unfortunately, their fears are not unfounded. Vlogger Rix Flix posted a video shot at Disney's Hollywood Studios in which he spent many painful moments contending with frozen screens and baffling malfunctions—as his subscribers watched and cringed, Flix fought for 20 minutes just to obtain his first Lightning Lane pass.

Genie+ will deliver an error message for a lot of reasons—you have a bad Wi-Fi connection, you're not eligible to do something, and so on—but it won't explain how you can fix it.

Hopefully, glitches like this will be resolved as the program's kinks are worked out, but it's also true that Disney's apps have always been poor at communicating the actual reason for load failures, leading some visitors to waste time trying to troubleshoot. 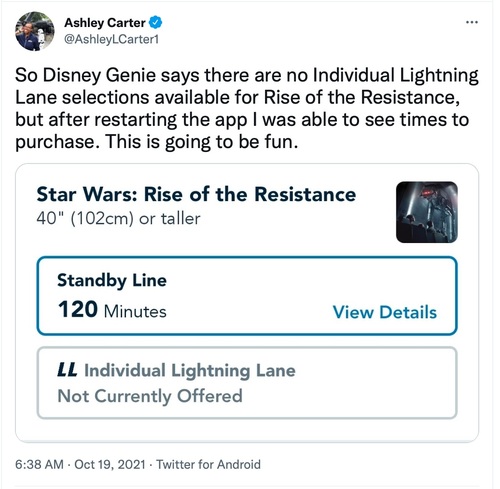 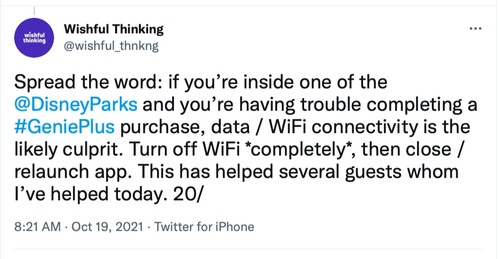 8. There's a plan for ride breakdowns, but not much of one.

This one was caught by @TheDIS, which hosts one of the most active Disney discussion boards on the Web: If you shell out for Individual Lightning Lane and then the ride breaks down, you'll get a pass that lets you come back anytime later the same day to try again.

And according to Blog Mickey, Disney keeps your money.

Update, October 22: The refund situation has been clarified. The Orlando Sentinel reports: "A Disney World spokesman who declined to be identified said Wednesday visitors would automatically receive a refund for individual Lightning Lane selections if a ride does not reopen for the rest of the day after a closure. If the ride reopens but a visitor is unable to ride due to individual circumstances, they would have to contact guest relations for a refund."

So you can now get a refund, but not simply if the ride was broken at your scheduled time. You can only get a refund if you wait out the entire operating day and the attraction never reopens that day—and even then, you have to seek help at a central information office, usually after waiting in line.

9. Early in the day, before the day's time slots are claimed, you can use Genie+ to rack up rides, one after another.

Granted, you'll need to keep moving with the dedication and fortitude of General Patton, but a writer at the fan publication The Laughing Place was able to put a sizable dent in his ride count by lunchtime. It helped that the Magic Kingdom wasn't particularly busy that day—if it were packed, it might have been harder to swing from one Lightning Lane reservation to another without waiting in between. 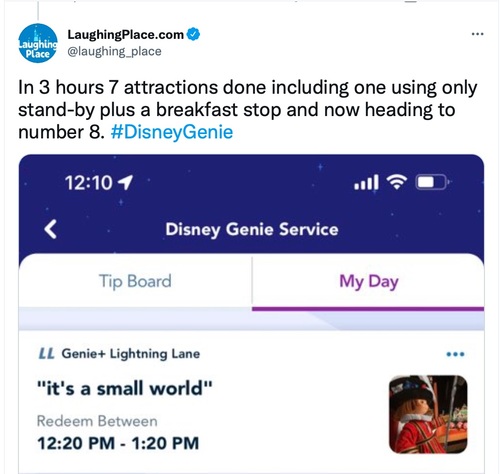 10. It's tempting to buy access for rides that don't need it.

In total, vlogger Pallo paid an extra $32, the maximum allowed on the day he went, to go through the fast lanes of three rides, and he spent all that before 10am. He needn't have bothered: None of the rides had a Standby (free) wait longer than 20 minutes.

One of his chief takeaways: If the park's not very busy, it's "a complete waste of time" to use Genie or Lightning Lane since regular lines won't be long anyway.

There are a few other wrinkles that some people will find important (such as the fact that guests at the Disney-run resorts can start snapping up Lightning Lane slots at 7am for the day ahead), and for those boring details, Disney produced an informational video with all the charm of an airline safety demonstration:

The new Disney Genie service launched today at @WaltDisneyWorld! Here are a few helpful tips from our cast members on how to get started and create your best Disney day! pic.twitter.com/IeymONBBos

Is it complicated? Most definitely. Is it a cynical cash grab? Very likely. Is planning a day at Disney becoming as laborious as determining your annual tax deductions? That depends on whether you're an accountant.

But for the many people who would rather not fool with any of these digital burdens and just enjoy the parks the way they used to, there is fortunately a classic workaround: Simply wait in the regular line.

We'll give Genie+ and Lightning Lane a little time to settle before giving them a try ourselves, and we'll report our own findings here at Frommer's soon.