Thank you for subscribing!
Got it! Thank you!
Home›Trip Ideas›Theme Park›2022's Most Exciting New Roller Coasters 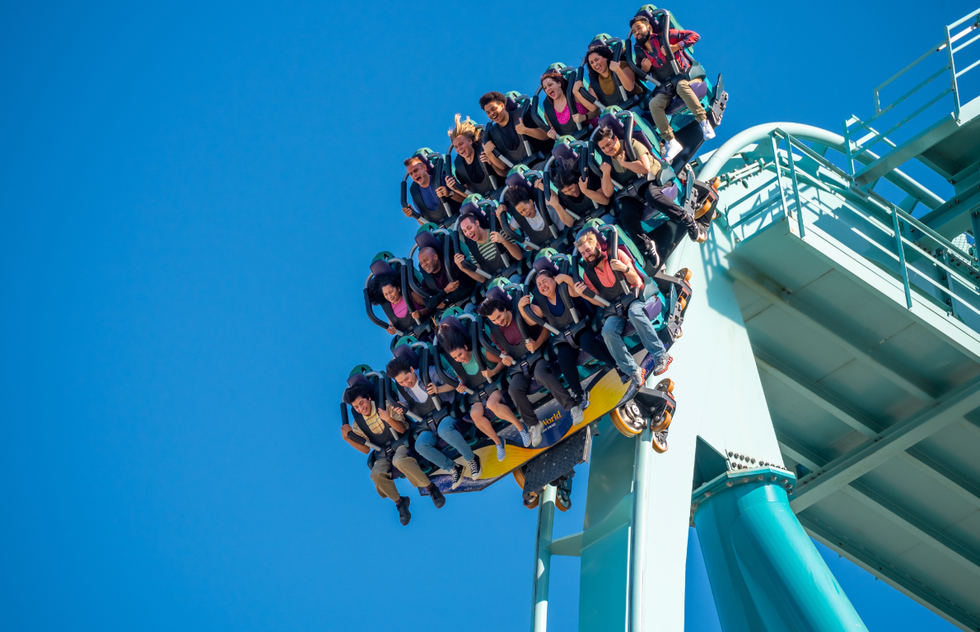 By Zac Thompson and Jason Cochran

This is a thrilling year for thrill rides. Roller coasters that were supposed to open in 2020 and 2021 but didn't due to the pandemic are finally ready to begin inducing screams and dispensing adrenaline fixes at theme parks across the country.

Among the major trends you'll encounter as you head out to internationally renowned parks and beloved regional champs this spring and summer: superheroes, of course (both DC and Marvel), makeovers that transform old standbys into whole new rides, and new rides that are transforming their parks. Exhibit A for the latter category is SeaWorld, which continues to pivot away from controversial animal entertainment and toward slam-bang roller coasters.

Here are some of the new rides we're most excited about at parks operated by SeaWorld, Disney, Six Flags, and other popular brands.

Back in 1999, as rival theme parks such as Universal's Islands of Adventure and Disney's Animal Kingdom debuted in nearby Orlando, Busch Gardens Tampa Bay upped its competitive edge by building a blockbuster wooden coaster on land that had once hosted an Anheuser-Busch brewery. Known as Gwazi, the ride had two sets of tracks—Lion and Tiger—to enable trains to race each other. Over time, rides on the sister coasters got rougher and lost popularity; by 2015, Gwazi was essentially abandoned.

But in 2020, Busch Gardens began testing a new thrill that recycled portions of Gwazi's structure and foundation. The pandemic paused plans for two years, but in March 2022, the reimagined Iron Gwazi is finally ready.

The new ride uses a modern "hybrid" metal track that allows for greater intensity than the old "woodie" did. Iron Gwazi is only a single route now, but it's now nearly twice as tall (206 feet vs. 105 feet), has a bigger main drop (206 feet vs. 92 feet), and goes a heckuva lot faster (76 mph vs. 51 mph)—just check out that gravity-defying inversion that starts at 1:40 in the video above.

Coaster fans are going nuts, and the Central Florida roller coaster arms race is back on: Last summer, Universal's Islands of Adventure built a new smash-hit coaster of its own, Jurassic World VelociCoaster. 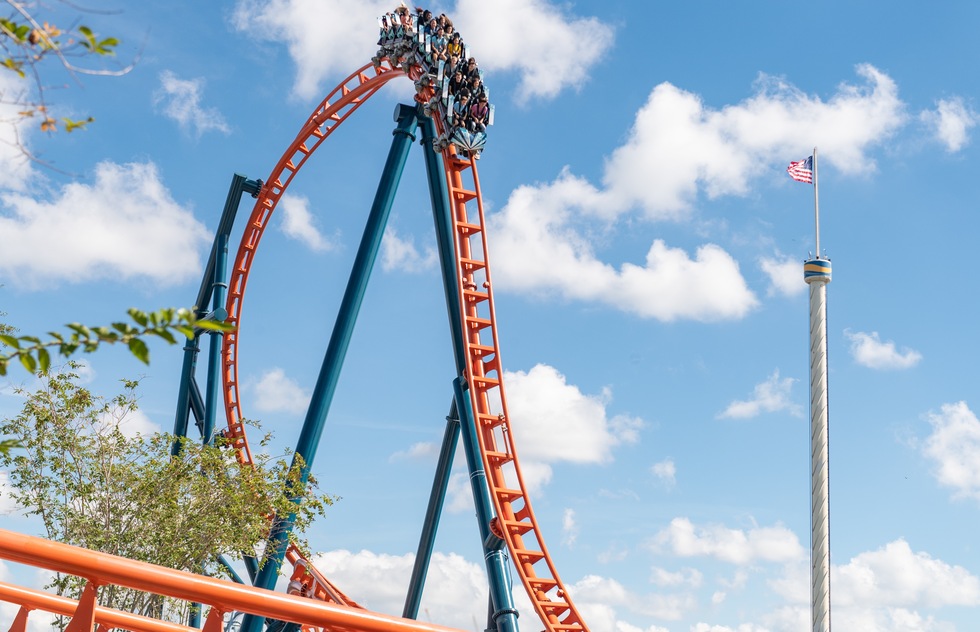 With Ice Breaker, SeaWorld Orlando adds its third marquee thrill in six years, after the additions of the celebrated Mako (2016) and Infinity Falls (2018).

Like Iron Gwazi, Ice Breaker was supposed to start scaring us in 2020, but didn't begin accepting passengers until 2022. The track is squeezed into a small lakeside area that never had a ride before, but the coaster packs a lot of punch for its compact size. Trains zip back and forth with electromagnetic acceleration, gathering speed before peaking over a dramatic "top hat" up-and-down hill that is now Florida's steepest vertical drop (100 degrees).

Now if SeaWorld would only do something about the decrepit Wild Arctic pavilion located across the pathway. 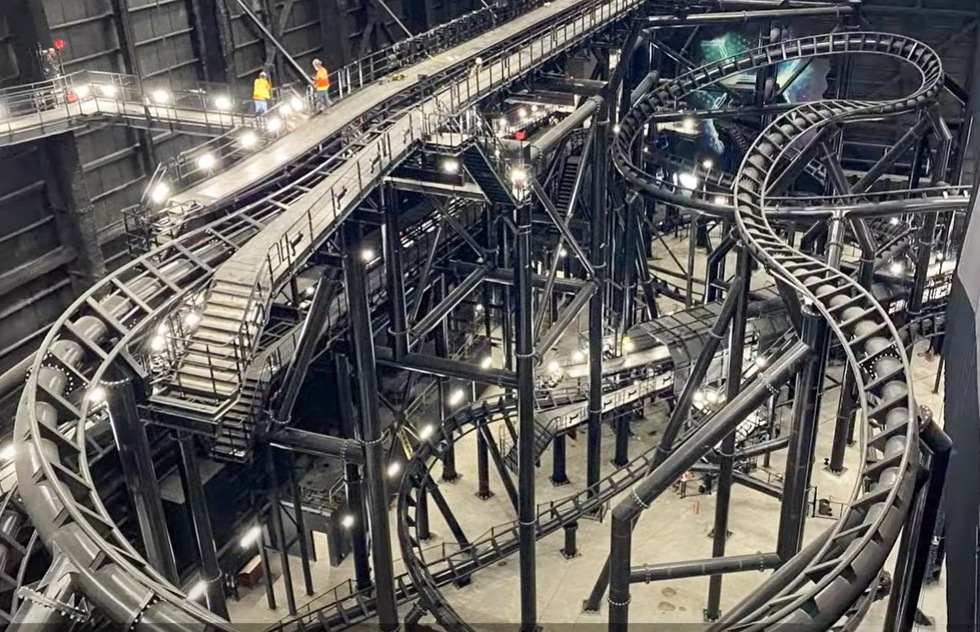 Disney Parks may be pulling in billions in quarterly profits as Americans satisfy their pent-up Disney desires, but attraction rollouts inside the parks have been markedly stodgy. At Walt Disney World in Florida, the company's infamously slow construction habits stretched to preposterous lengths during the pandemic. Guardians of the Galaxy: Cosmic Rewind, an indoor "story coaster," has now been under construction at Epcot for half a decade (an executive shared a view of the track layout in a 2020 video), while Tron Lightcycle Run, a duplicate of a ride at Shanghai Disneyland, was announced in July 2017 and broke ground at Magic Kingdom in the winter of 2018–2019. 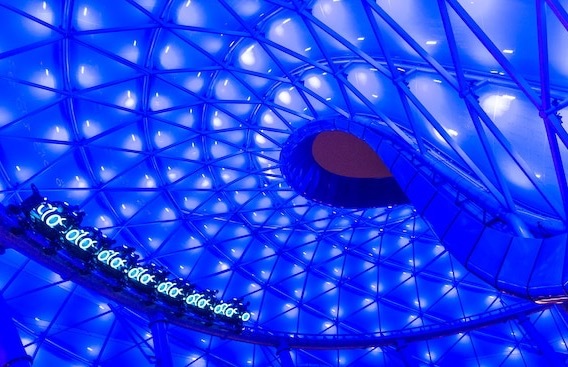 Both attractions are finally poised to debut in Florida. Cosmic Rewind, which has rotating cars that direct riders' attention toward filmed segments starring the actors from the Marvel film franchise, is slated for this summer (some sources inside Disney have cited a Memorial Day opening). No opening date has been announced yet for Tron, a rapid-launch and mostly indoor layout featuring seating that simulates motorcycles, but because we've ridden the ride repeatedly and with immense delight in Shanghai, where the coaster's name is slightly longer but the layout seems identical, we can tell by construction progress that the ribbon-cutting is advancing quickly.

After these two nearly completed rides are open, it'll be a while until Walt Disney World opens a major new ride. Nothing substantial is under construction now, and it takes Disney years to build new attractions. 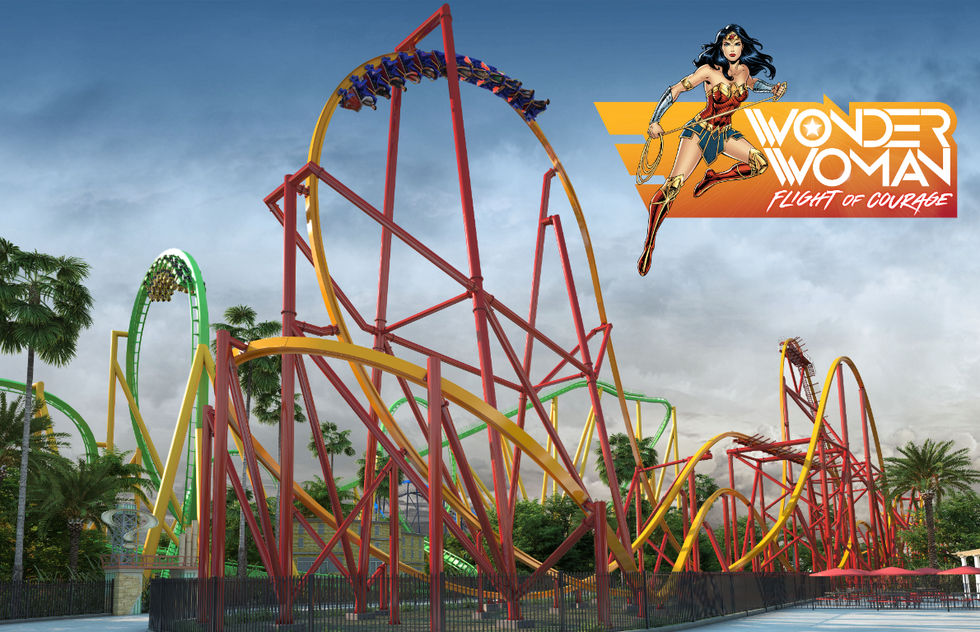 Six Flags Magic Mountain is adding its 20th roller coaster this year. The Los Angeles County amusement park claims that's a higher total than at any other park in the world. Located in the 6-acre section of Magic Mountain dedicated to DC Comics superheroes, Wonder Woman Flight of Courage also sets records for length and height among single-rail coasters.

Across 3,300 feet of track reaching an elevation of 131 feet, the ride's four 12-passenger trains zoom along at speeds up to 58 mph through three inversions and an 87-degree drop as well as other dramatic dives, banks, and turns. Basically, it promises to be the most exciting Wonder Woman–related mode of transport until somebody invents a real-life Invisible Plane. 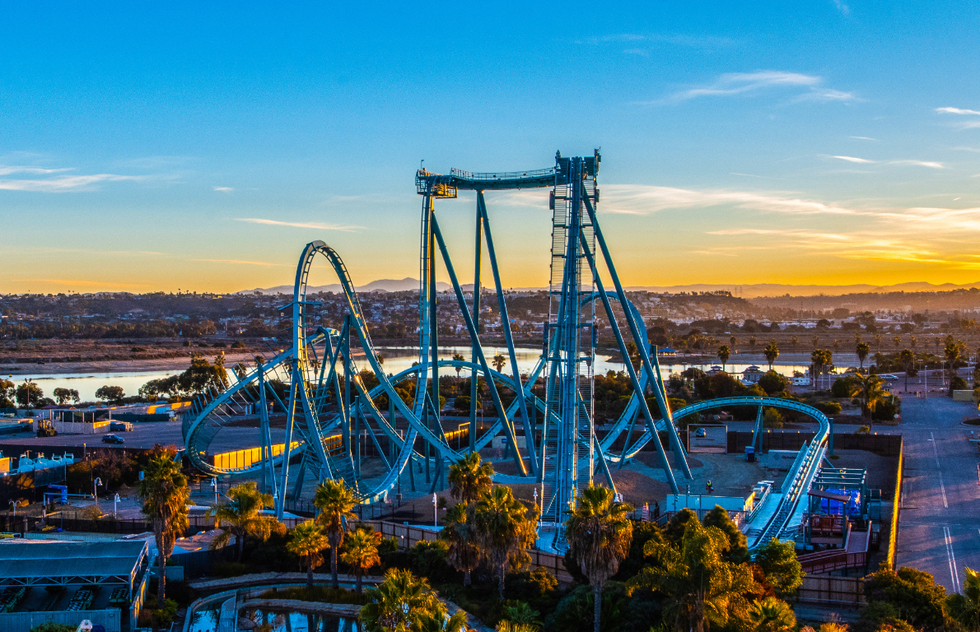 Emperor at SeaWorld San Diego is a floorless dive coaster, meaning the legs of its 18 riders dangle as the car plunges down a 143-foot vertical drop at a speed of 60 mph. Intended as a kind of supercharged interpretation of the incredible diving skills of emperor penguins (there's your marine life connection), the ride is billed as the tallest, fastest, and longest of its kind in California, though similar versions of the ride already exist elsewhere, including 2005's SheiKra at Busch Gardens Tampa Bay.

After Emperor's initial facedown drop (which starts around the 0:55 mark in the clip below), the remainder of the experience twists and turns along the nearly 2,500 feet of track with the smooth speed of feathered flippers slicing through antarctic waters.

The design of Pantheon at Virginia's Busch Gardens Williamsburg has a few things in common with SeaWorld Orlando's Ice Breaker. Like that ride, Pantheon is a swoopy, swervy adventure that's initially powered by launches instead of hills, switches tracks mid-course, and centers on an exciting "top hat" up-and-down hill that looks like it was doodled by a second grader with no understanding of physics. The sense of weightlessness it provides is said to be ridiculously fun.

But Pantheon, which is a product of the widely praised Liechtenstein-based manufacturer Intamin, is also being marketed as the world's fastest multilaunch roller coaster, with a maximum speed of 73 mph. It's the biggest new coaster attraction in the Mid-Atlantic region. 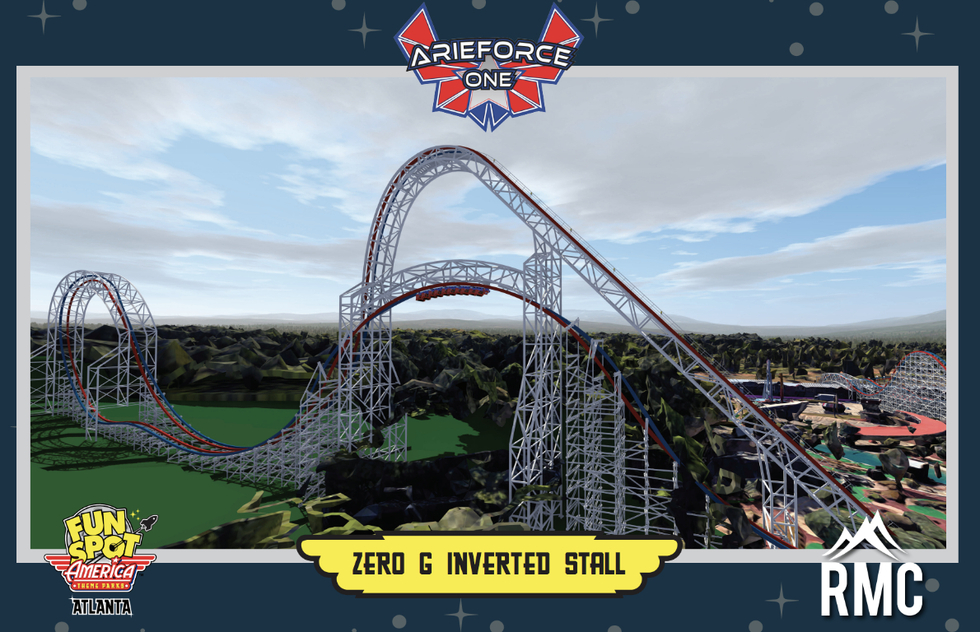 Fun Spot America, which has two locations in Central Florida and another just south of Atlanta, is making its biggest-ever investment in a single ride with the $13 million ArieForce One, a steel coaster currently under construction at the company's Georgia amusement park. ArieForce One is being built by Rocky Mountain Construction, the award-winning makers of Iron Gwazi, Wonder Woman Flight of Courage, and many other coaster classics.

Among the features designed to tingle spines on the Fun Spot attraction: a 154-foot-tall hill, an 83-degree first drop, speeds up to 64 mph, and four inversions. One of the latter involves what Fun Spot says is the USA's longest "zero-G stall," which leaves riders suspended upside down for several nerve-racking moments.

The coaster takes its name from the Arie family, who own the parks. According to a press release, people in line for the roller coaster will be regaled with stories about company founder John Arie, Sr., and his "boyhood passion for flight."

"A boy stood on the edge of a field, dreaming of reaching the stars," begins the description of a promotional video for the ride. "That boy was named John Arie (Senior)." 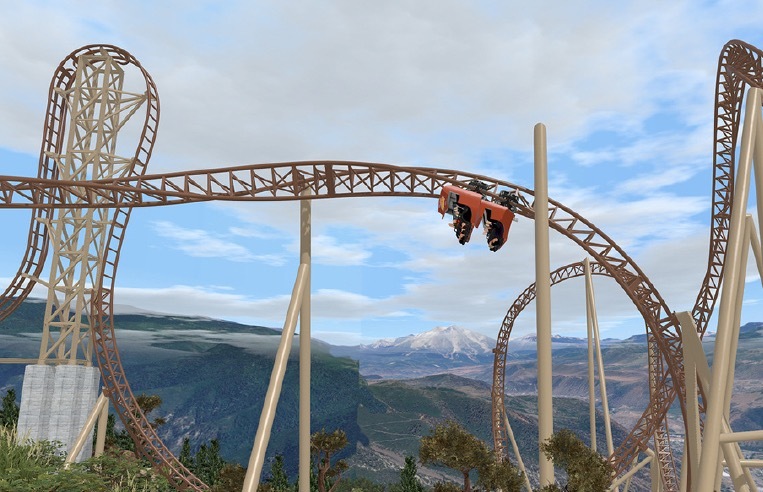 Glenwood Caverns Adventure Park, located in the forests of the Rockies west of Denver, set a tall order for German ride manufacturer Gerstlauer. The park wanted a wild ride perched atop Iron Mountain, which rises some 1,300 feet over the area.

Gerstlauer obliged with a design that capitalizes on vertigo. Defiance centers on a dramatic drop that whisks nimble little train cars 110 feet downward at a 102.3-degree angle in what is said to be the steepest drop in the Western United States. Set at an elevation of 7,160 feet above sea level, the ride is being billed as the highest looping coaster in the country.

There's a lot riding on the success of Defiance: In 2021, Glenwood Caverns was the site of a tragic accident when a six-year-old fell from the Haunted Mine Drop and died. A state investigation blamed operator error rather than design. 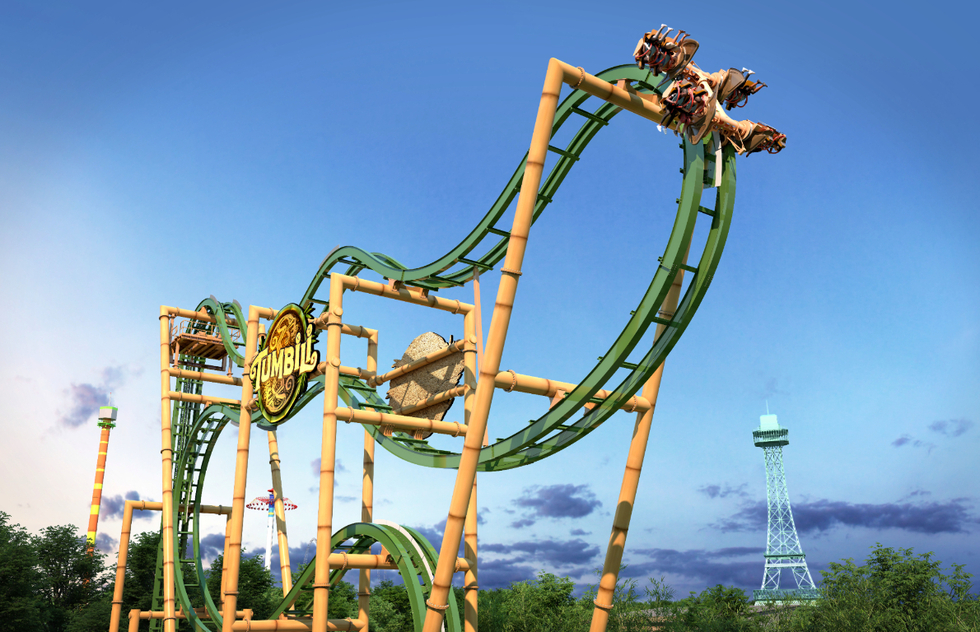 Kings Dominion near Richmond, Virginia, has given a makeover to its Safari Village area, renaming it Jungle X-Pedition and reimagining the concept as a remote archaeological dig site abounding in adventure and "immersive retail" opportunities.

The anchor attraction is Tumbili, a discombobulating spin coaster that suspends riders on either side of the track so that the cars can flip continuously throughout the 55-second experience. Magnetic technology controls the spinning.

Based on past encounters with similar attractions such as The Joker coaster at several Six Flags parks, we'll tell you that anybody with a delicate sense of equilibrium or a sensitive stomach might find this one more fun to watch than ride. Whatever you do, don't take it on after eating a big funnel cake. 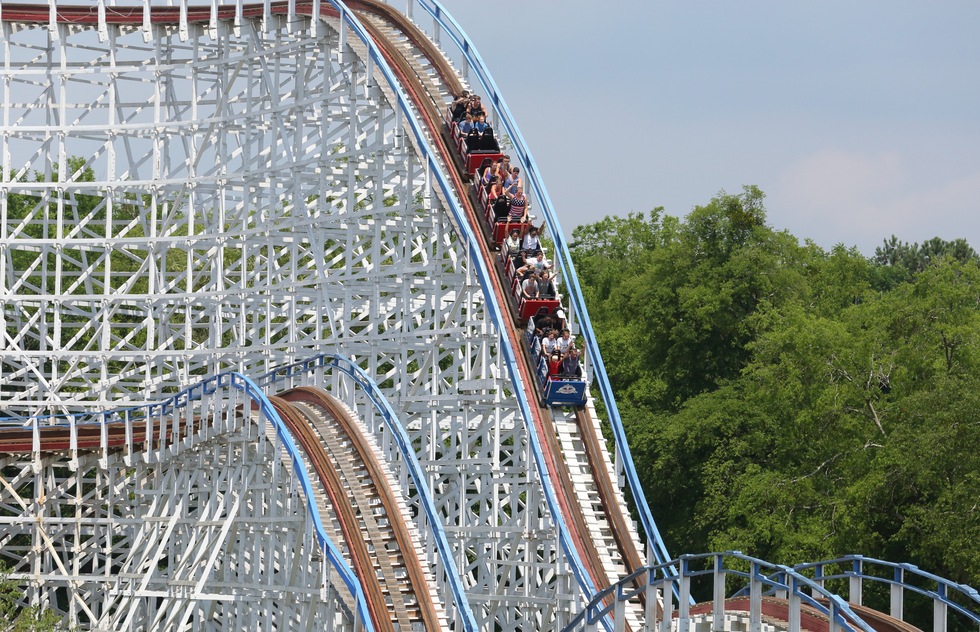 Whether out of respect for amusement-ride heritage or to save money, several major parks have decided to rehab some of their most important older rides rather than build fresh ones.

The most notable example is the Great American Scream Machine, which was the world's longest, tallest, and fastest roller coaster when it opened at Six Flags Over Georgia in 1973. The wooden ride was designed by America's oldest coaster designer, Philadelphia Toboggan Coasters—in business since 1904. For this season, PTC is respectfully retracking and rebuilding the milestone ride.

Too many old "woodies," such as Magic Mountain's Colossus and Busch Gardens' Gwazi (see above) have been converted to modern metal rails that allow for more gravity-defying acrobatics, so it's a treat to see a classic wooden ride like the Scream Machine get refurbished rather than replaced.

At Six Flags Great Adventure in New Jersey, meanwhile, Bizarro, a 1999 addition that was the world’s first floorless coaster, will revert to its original name, Medusa, when the seven-loop steel ride gets a new paint job and some overdue TLC.