Thank you for subscribing!
Got it! Thank you!
Home›Trip Ideas›Theme Park›Theme Park Insider: The Best of the Best Attractions 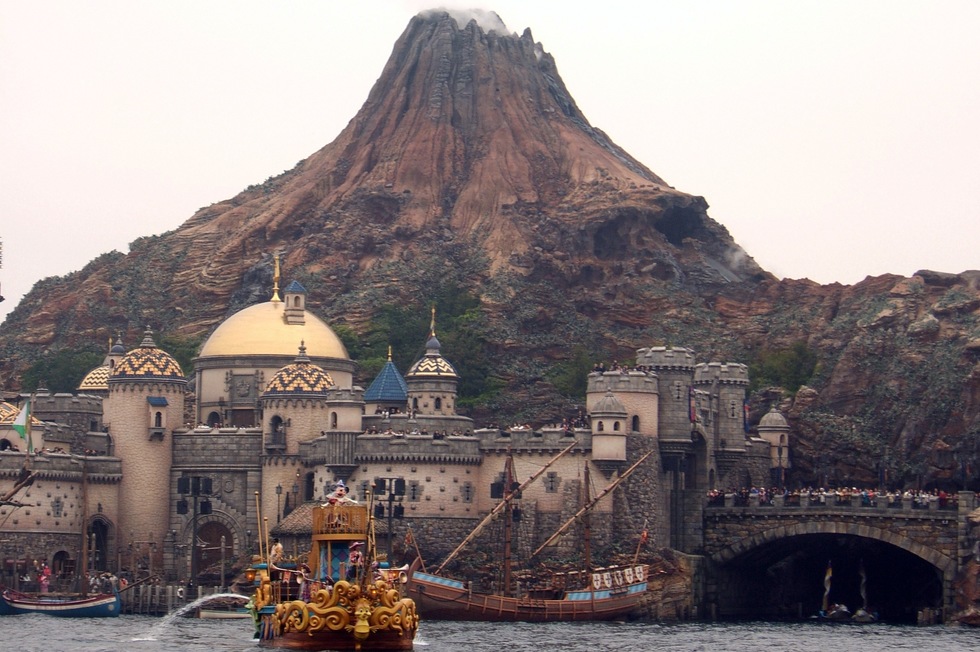 Theme Park Insider: The Best of the Best Attractions

Pauline Frommer chats with Robert Niles, founder of ThemeParkInsider.com, to discuss award-winning theme parks and their attractions, from the best places to eat to the best new roller coasters.


Pauline: As is obvious, it is the middle of summer, which means for many people, it’s theme park season! And so, to talk about that important travel subject, we have perhaps the world’s greatest expert. His name is Robert Niles. He’s the founder of Theme Park Insider.com.

Your publication recently gave out some awards to help guide people who are looking for the best of the best. Can we talk through some of them? What were the categories and who were the winners?

Pauline: Let’s go on the attraction side of it. In terms of the best theme park overall, what were your criteria and who was the winner?

Niles: Basically the way we select these awards is that readers can come onto ThemeParkinsider.com and rate and review all these locations around the world for the featured parks that we list on the site. What we do is that we look at those ratings over the last 12 months and whichever eligible location in a particular category has the highest average reader rating, with a minimum number of votes, that’s the winner in that particular category. Then for best theme park, we’re looking at basically all of the votes across categories.
advertisement
Pauline: So who won?

Niles: Our winner for the third year in the row is Tokyo DisneySea in Japan.
Pauline: Tokyo Disney? Why is that better? I’m feeling very patriotic and upset right now! Why is Tokyo’s Disney better than the ones in Anaheim and Orlando?

Niles: Actually, what’s interesting is that Tokyo DisneySea was originally supposed to be built in Long Beach, California. For a little Disney history: They used to own the operation rights to the Queen Mary in Long Beach, which they had for a little while. That since has been sold off to another company. At the time though, they were thinking about building a theme park in Long Beach around the Queen Mary. They ended up not doing that for a variety of reasons. But their partners out in Tokyo who own Tokyo Disneyland said, “Hey, you know we’re right here on the ocean. Those plans were pretty good. Why don’t we do them?” And they brought in a huge budget for them. It was well over $5 billion. They just did it up right. It is a wonderful park.
advertisement

Pauline: How does it differ from the Disney parks we’re used to?

Niles: I think it really just comes down to the quality of the detail with all of the décor, and of the attractions that’re there. They kind of had a different tempo that they were working with so they were able to do some different things. They have this Jules Verne-inspired mysterious island which is a huge volcano that actually erupts at night. That has this wonderful high speed attraction in it called Journey to the Center of the Earth which, not coincidentally, won our best attraction award. It’s such a wonderful experience.
advertisement

Pauline: Is it a roller coaster or do you just see lots of lava and interesting things in the middle of the earth?

Niles: You are going down into the center of the earth, as the title would imply, and see all of these wonderful creatures from the imagination of Jules Verne. Then there’s this moment when you come face-to-face with this lava monster and then you are launched at high speed up out of the mountain. It actually uses a similar ride system to the Test Track ride at Disney World and the Radiator Springs Racers ride at Disney California Adventure, if anyone has been at one of those two parks. But they do it in a completely different way with the theme and story that they tell. It’s original and it’s not something seen at other Disney parks. I think people really do respond to those original stories like they’re seeing in Tokyo.
advertisement
Pauline: This may be a silly question but does it get hot? Do you feel the lava?

Pauline: I would think also that the food there must be terrific. I love Japanese food and I know that at the different Disney parks around the world the food often reflects the local cuisine, right?
advertisement


Niles: Sometimes, but not always. I will say that the most delightful soup and bread I’ve ever had in my entire life was at the Tokyo Disneyland. You don’t normally think of wonderful bread when you think of Japan, but everything they do they try to do to a high level of excellence. The customer service in Japan is simply the best in the world. It’s just a wonderful overall experience. The exception I will say is that you would think the food in Disneyland Paris would be really good. It’s terrible. I think what they tried to do there is they were trying so hard to be Americans. They think, "Oh they have terrible food in America. Let’s have terrible food here!" But Tokyo has absolutely wonderful cuisine. In fact, they didn’t win this year, but they have won our best restaurant award several times in the past.
advertisement
Pauline: Well let me ask you, what is the best new attraction? Is it that Jules Verne ride or is it something else?

Niles: The new overall award was for a new attraction called Justice League: Battle for Metropolis that debuted at Six flags Over Texas and also Six Flags St. Louis. It’s this wonderful thrill ride in the dark where you are in this car and you are shooting bad guys with your little ray gun while Batman and Superman and everyone else is battling the Joker and trying to save Metropolis. It’s a very different attraction for Six Flags. It’s much more the type of attraction that we’re used to seeing at Disney and Universal Parks but Six Flags absolutely nailed it with this one.
advertisement

Niles: It’s not really so much a roller coaster. It’s one of these motion-based rides, kind of like the Spider-Man ride at Island of Adventure or the Indiana Jones ride at Disneyland. It’s also got the shoot-em-up element like the Buzz Lightyear ride at Disneyland.
Pauline: What’s the best family attraction?

Niles: For that one, our readers selected the Hogwarts Express ride at the Universal Orlando Resort.
Pauline: Why? What’s that one like?
advertisement

Niles: That is part of their Wizarding World of Harry Potter Diagon Alley expansion. Theme park fans know that Universal brought the Wizarding World of Harry Potter to its Island of Adventure theme park in 2010. However, last summer they opened a new part of the Wizarding World called Diagon Alley over in the Universal Studios Florida park. To connect the two lands, they built a full size Hogwarts Express train. So if you have a park-to-park ticket, you can get on the Hogwarts Express and ride it over from Diagon Alley to Hogwarts and back. When you’re on it, you don’t just see the back alleys of Universal Orlando. They’ve got these windows that are actually video effect screens so it makes it look like you’re traveling through English and Scottish countryside. Hagrid comes up on a motorbike and you see the Weasley twins on broomsticks outside the window. You have these character interactions while you’re taking the train and you end up going from one theme park to the other.
Pauline: It’s not at all jolty? It doesn’t make you ill? It’s just fun?

advertisement
Niles: It is just a train ride. Just like the steam train rides you might have at other theme parks, except instead of the regular scenery of the park, you’re kind of stepping into a Harry Potter universe for a little while. It’s like you’re actually riding the train from King's Cross to Hogwarts just like the characters in the Harry Potter films.

Pauline: That sounds lovely, actually. Sounds like something even I would like! I get motion sick on too many rides but that sounds fun! But let’s talk about something a little less pleasant. Let’s talk about prices this year and is there any way that folks visiting the parks can save?

Niles: Prices are going up, as they always do. Which is why the first piece of advice we give people is go ahead and buy in advance. As soon as you know you want to go someplace and can lock in the dates, go ahead and get those tickets so you lock in your price before another one of these price increases come along.
advertisement
Pauline: You pay less buying in advance than you would at the gate too, right?

Niles: Usually. I mean, parks will run special discounts on their websites so that if you buy in advance online you can get a lower price than you would in person at the gate. Also, you have your ticket when you get there so you don’t have to spend the first part of your visit waiting in yet another line trying to make a decision about buying tickets. You’ve got them in hand and can go straight to getting on the rides, which is what you’re really there for anyway.
Pauline: Time is money when you’re at a theme park. Does buying in advance help at all when there are costs that’re unexpected to theme park visitors, like the cost of parking? Is there any way to get around that?

advertisement
Niles: Another thing that we tell people: Don’t buy anything inside a theme park that you can buy outside of the park. So remember to bring with you things you might need during the day such as sunscreen or any time of medicine. Bring your cellphone charger. You can charge up inside the park sometimes. A lot of the time you can buy souvenirs outside of the park if you don’t inside before. You might get something truly unique if you want to buy inside the park but try to buy outside. Things like parking, that’s a little bit difficult. Sometimes, depending on how often you’re planning to stay or what months you’re planning to go, getting an annual pass can actually be better than getting individual park tickets. Oftentimes, annual passes include parking passes with them so you can factor in that cost, which is $15–$20 a car a day, to see if an annual pass is a better deal. Keep in mind you just need one person in the car with an actual pass to get that parking.

Pauline: So invite the person with the pass even if you weren’t thinking of them otherwise!

Niles: Absolutely. It’s really great way of doing it. Also if you’re staying at someplace like the Disney theme parks, if you’re staying on-site, for many of the hotels there is no parking charge and you can take Disney’s own transportation to the theme parks. It can cost a little more time, but it does save you the cost of the parking charge every day.
advertisement

For more on the winners of the Theme Park Insider Awards, visit http://www.themeparkinsider.com/awards/.

This interview is from The Travel Show national radio show with Arthur and Pauline Frommer on WOR70 . Listen every Sunday right here on Frommers.com or on a radio station near you.