Thank you for subscribing!
Got it! Thank you!
Home›Trip Ideas›Winter Sports›The Cold Comforts of the Kirkenes Ice Hotel, Norway 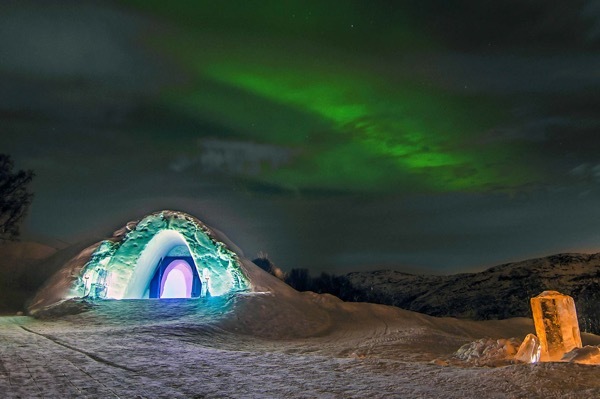 The Cold Comforts of the Kirkenes Ice Hotel, Norway

Hotels sculpted out of ice and snow have a become a rite of passage for adventure travelers. But is a night on the ice all it's cracked up to be?

It happens in the northernmost corner of Europe, at the furthest finger of Norway, eight miles from the Russian border. Each winter, an ice hotel is sculpted in the tundra of Kirkenes out of 15 tons of a snow and ice mixture. They call it "snice."

Giant balloons are used as a base to create the rounded guest spaces, and a dozen Chinese sculptors spend 10 days carving the elaborate decorations for the 20 rooms with designs that range from frolicking penguins to Santa to a towering leprechuan to a family room decked out with Olaf, Anna, and Elsa from Disney's Frozen (pictured below). The 2015-2016 season marked the hotel's 10th anniversary, and 2,000 adventure-seeking travelers spent a night from mid-December to the thaw of mid-April. I was one of them.

So why stay in an ice hotel? Well, the setting is a draw: It's fanastically beautiful this far north, with snow stretching as far as the eye can see. And then there's the Northern Lights, one of the biggest attractions, since the more removed you are from city lights, the better chance you have of spotting them. And of course there are the bragging rights. The hotel even gives out a certificate attesting to the fact that you survived the trial by ice.

It's cold, though, as I quickly discovered. Really bone-chillingly cold. The weather outside was 0° F when I visited in February (with a windchill of -16°). And although the ice caves of the hotel stay a relatively balmy 27°F all season, it's not warm by any stretch, since the only way to keep a hotel made of snow and ice is to not let it get above freezing. 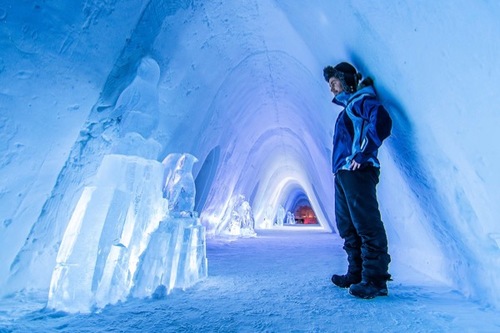 To counter the discomfort of the frigid temperatures, the hotel spends a lot of time feeding you. First there’s the optional King Crab Safari, which was a highlight of my stay. Massive crabs are pulled from a hole in the ice, then steamed and served within the hour at a cozy cabin in the woods. The massive and incredibly succulent crab legs were easily one of the best meals of my life, and worth traveling to the cap of Europe to try.

After the frosty sled outing from the crab shack back to the ice hotel, there's a welcome snack of reindeer sausage to toast over an open fire in the rustic "Gabba" hut. Then a stop at the impressive carved Viking ship that forms the center of the ice bar for a blood-red crowberry juice shot. And then there's a lovely three-course dinner served in the heated restaurant. (The restaurant is located in a permanent heated building that also houses the communal bathrooms as well as the lounge.) 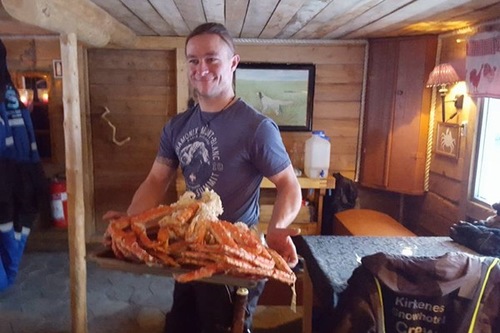 So what to do after all this eating? You can visit the resident reindeer or have a drink at the ice bar (although on my stay it was only open for half an hour, so don’t count on that for entertainment). If you’re lucky, you can spend the evening watching for the Northern Lights; they appeared only faintly during my time in Kirkenes, so don't count on those, either (luckily, I had spotted them on the Hurtigruten ship that had carried me to Kirkenes a few nights before). You can also sign up for an evening of dog sledding or snowmobiling, which is a fabulous way to chase the Aurora Borealis (both cost extra, but are loads of fun and definitely worth trying here or elsewhere while you’re in northern Norway). 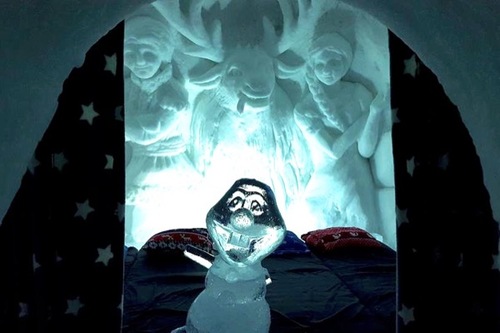 And then, of course, you have to learn how to go to bed; no small thing when you don’t want to get frostbite while you sleep. A quick demo from a perky guide demonstrated how I was to wiggle into a mummy sack after first putting on wool socks, wrapping myself in a sheet, and donning a bank-robber-style black balaclava over my face and head. "If you fight the zipper, you won’t be able to get it all the way up, which is how you trap the heat," the guide said. "Oh, and if you think you have to go to the bathroom, just go. The more you wait, the more panicked you could become, and then you struggle with the zipper, and you can’t get out of the sleeping bag." Good to know.

To get through the frigid night, I also followed the instructions to strip down to one insulating base layer so I didn’t get "too warm." Fat chance. I truly wished I had worn more clothing when my knees started knocking at 3:30 am—but when I reached outside my mummy sack, my pants were as cold, as well, ice. So out they stayed, and cold I remained. The igloo-like rooms have no windows or light switches. To keep it from being permanent night, LEDs stay illuminated all the time, making the room glow around you (most of these are blue or white; but the leprechuan room glowed green). It’s like being in an aquarium or a frosted fish bowl—quiet and serene, but slightly claustrophobic as well.

Theoretically, if you can't take the cold, you can spend some of the midnight hours in the heated lounge attached to the restaurant. When I stayed the night, however, a large tour group had claimed every chair as soon as dinner was over, so in my ice room I stayed. It was a long, cold night of worrying about how to get out of my mummy bag if I had to go to the bathroom. 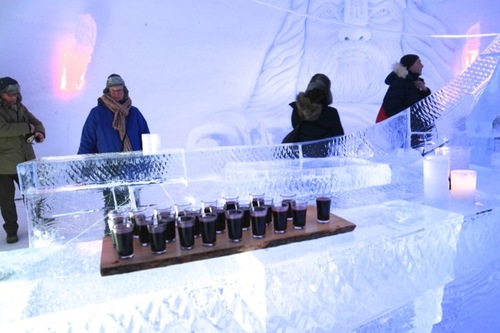 In the morning, though, there was a wonderfully hot sauna with showers (only open from 6 to 10 am, so you can't use it during the night and get "a false sense of warmth"); a buffet breakfast with bottomless coffee; and the satisfaction of having made it through the night in one of the most extreme hotels in the world.

Would I do it again? Nope. It’s definitely a one-and-done kind of experience. But would I stay in one of the wooden, comfy cabins that line the property? They have all the comfort basics, like heat and private bathrooms, and large glass windows where you can watch for the northern lights in comfort. Those I would definitely do if I visited snowy Kirkenes again. And the King Crab? Bring it on!