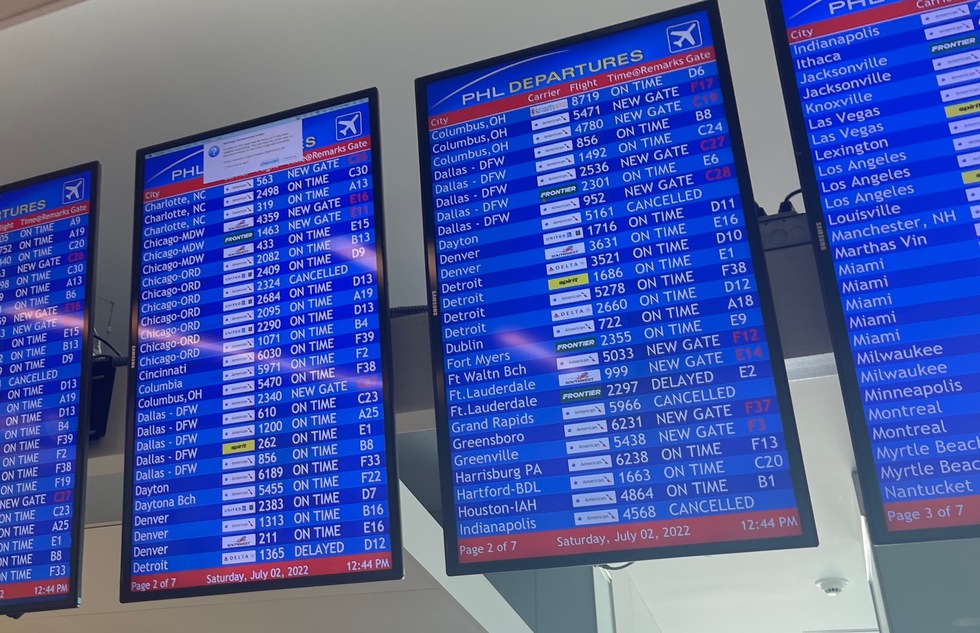 5 Things You Can Do to Avoid Flight Delays and Cancellations

In the summer of 2022, when friends tell us they're about to fly somewhere on vacation, the typical reaction isn't so much "I'm jealous" as it is "Wow, good luck with that."

It scarcely bears mentioning how badly the world's airlines have fallen apart this year. Most of us are all too miserably aware of the meltdowns.

When you enter an airport, you're always putting yourself at the mercy of the travel gods, and both weather and inadequate airline staffing can hamper even the best-laid vacation plans.

But it's useful to know that not every travel hazard is random. When you check the statistics, you'll find there are a few things every passenger can do to minimize the chance of having a journey get delayed or canceled.

It's painful to wake up before dawn to catch a flight, but it's worth it. The numbers prove it.

According to the U.S. Department of Transportation's Office of Aviation Consumer Protection, in May 2022 at the 30 largest airports in the United States, between 84% and 95% of flights scheduled to go before 7am ended up departing on time.

Side bonus: Those first flights are often dramatically cheaper than later ones.

Nonstop flights are the best because if you only take a single flight, there's only one flight at risk of disruption.

When you perform a flight search using a booking engine (here are the most successful airfare search engines from our exhaustive tests), look for an option that allows you to limit the results to itineraries that have one or fewer stops. That option might not show up until the booking engine returns the first page of flight results. Use the feature to filter out circuitous routings.

Nonstop and direct flights often cost more than those that hopscotch the country, but ask yourself if you're willing to pay a little more to avoid the headache of being stranded in a connecting city overnight. For many of us, the peace of mind is worth the outlay.

Frommer's recently posted a guide to locating nonstop flights for any destination. Use it, because the fewer times you have to change planes, the fewer chances for mayhem.

Even better than a nonstop flight: a long-haul flight, such as transatlantic ones. While airports in small cities are seeing their minimal services disrupted more often, trips between major world cities are performing much better, chiefly because those routes are more popular and more lucrative for the airlines.

If you do connect, give yourself plenty of time.

Although the airlines' performance records have fallen apart this year, booking engine algorithms are still suggesting itineraries with Spandex-tight layovers as if nothing is wrong.

It's still common to see suggested connection times as short as 45 minutes in airports as complex as Dallas–Ft. Worth and New York's JFK. Timings that close might have worked a few years ago when fewer things were circling the drain, but in 2022, tight turnarounds don't always fly.

If you must change planes, leave yourself extra time for a margin of error. After all, if you miss a connecting flight, it's not as easy as it used to be find a spare seat on the next one.

Scrutinize every itinerary that the major booking engines suggest and weed out tight timings—this isn't 2019.

The U.S. Office of Consumer Aviation Protection's 2022 year-to-date data found that four major carriers had an on-time rate on the lowest end of the performance spectrum, with just 62% to 68% of flights arriving on time. Those carriers are JetBlue, Spirit Airlines, Allegiant Air, and, the worst, Frontier Airlines.

In Europe, the tourism analytics company Mabrian put together a list of carriers that were most likely to cancel scheduled flights after tickets had been sold. The worst offenders for June and July were Turkish Airlines, EasyJet, and Wizz Air.

FlightAware, which analyzes aviation industry data, reported that from May 26 to July 19, the three American airports with the highest percentage of canceled flights were Newark Liberty International Airport (7.4%), LaGuardia Airport in New York City (7%), and the D.C. area's Ronald Reagan Washington National Airport (5%).

The American airport with the worst track record for delays in that period was Orlando International (33.4%) in Florida.

It's important to remember that despite the anxiety-inducing headlines, a majority of flights are still arriving on time—and with their luggage too!

But if you could mitigate the risk of a scheduling train wreck (though in the sky), why wouldn't you?