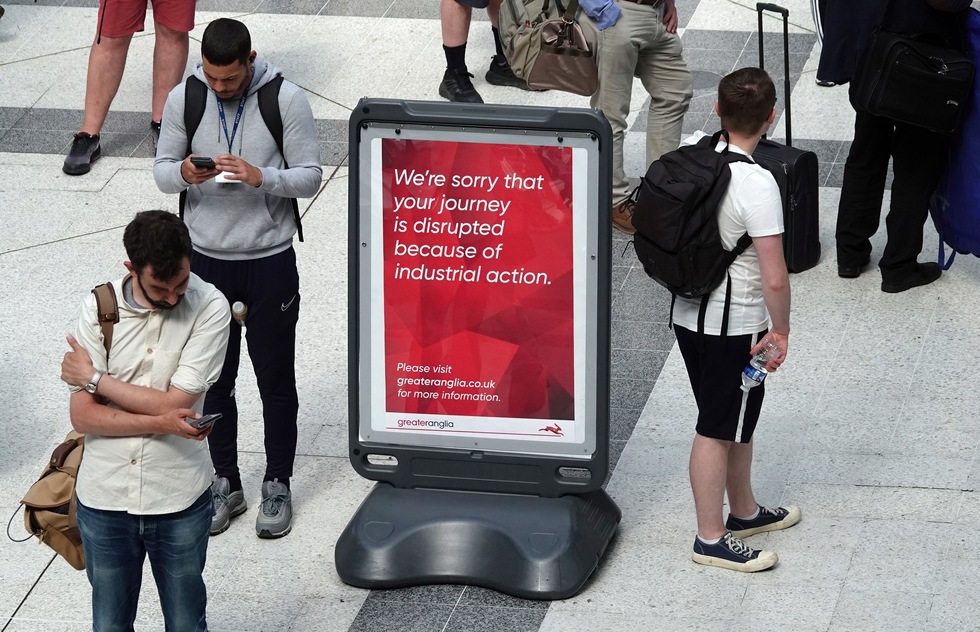 In 2023, Strikes Are Paralyzing European Travel

The strain of the pandemic has exposed so many of our current societal systems as being inadequate for the demands we now place upon them, and the world is reacting with discord and disarray.

Many business owners are calling the global staffing crisis a "labor shortage," but to many job seekers it's simply about holding out for an occupation that pays for basic needs like rent, food, and health care.

We're living through a messy period of forced economic reform. While workers flex their muscles and employers figure out how to evolve to a sustainable place that keeps employees out of risk, things are going to be bumpy.

Nowhere are they bumpier than in Europe, where the culture of strike action runs deep. In recent history, countries like Spain have endured strikes of various types that can last for more than a hundred days out of the year.

Often, European labor shutdowns revolve around areas of life that have little direct impact on travel, such as education or health care.

Travel-oriented strikes, though, are common as well. And they can paralyze a vacation, ambushing travelers who didn't anticipate a shutdown because they're not plugged into local politics. Sometimes, such as on railways, operators will keep "essential services" running, but you can expect those to be overcrowded and inconvenient. For strikes by airlines or government workers, travelers are often better off avoiding the area entirely.

We already have a good idea of which airlines and airports are likely to see routine delays, thanks to the sort of data crunched in Cirium's new report detailing on-time airlines and airports. But strikes come and go, shutting down free movement at unexpected times and in unanticipated ways.

Big strikes in Europe this winter

As inflation tightens its grip, Europe is weathering a season of inconvenient work stoppages, something The New Statesman is calling "Europe's winter of discontent," although there are no signs that the slowdowns will end once spring arrives.

Over the Christmas holiday, a peak time for travel, strikes in the United Kingdom halted railway journeys and thinned the number of agents inspecting passports at the border.

In France, a December conductor strike caused the cancellation of more than half of the country's railway departures on some days before an agreement was reached and services resumed.

Even as I write these words, on a typical Thursday in January, French protests over raising the retirement age are affecting railway travel.

And there's more to come across the continent.

A strike at fuel stations is set to disrupt Italian road trips next week.

Workers for TAP Air Portgual airline, who are seeking better conditions, have also announced a labor stoppage for next week that will ground more than 1,300 flights.

Britain's passport control agents are set to walk out again on February 1 as part of their own months-long pressure campaign for better pay. Walkouts have also been announced for 15 British train services and for the Bakerloo Line of the London Underground.

And those are just a few of the most newsworthy strikes that directly affect travel. In Germany, postal workers have walked off the job, while in Greece, municipal workers are striking.

In Europe—more so than in the United States—strikes are seen as an effective way to tell employers that what they're doing isn't good enough for society, so labor actions abound.

How to find warnings of strikes

So how can you find out if a strike is about to hit your vacation and strand you or put you through the misery of rebooking?

Tourists won't usually find it easy to interpret the impact of warnings made in native languages by national authorities, such as this notice page from the Italian government.

The easiest way for English-speaking travelers to anticipate coming trouble is to visit an English-language news publication in the destination and then search for news about strikes or disruptions.

So does Sweden-based The Local, which covers Austria, Denmark, Germany, Italy, Norway, Spain, Sweden, and Switzerland in English. The Local tags disruption-related news stories with "strikes" so that each of the local editions has a web page with the latest updates. Here, for instance, is the URL for strike news in Germany: www.thelocal.de/tag/strikes.

If you'll be taking a train, you can search for disruptions using the name of your destination's national railway authority. In France, you'd search for strikes having to do with the SNCF (Société Nationale des Chemins de Fer Français). In Italy, go to Trenitalia. Britain's National Rail warns about "industrial actions" and service disruptions, but Germany's Deutsche Bahn only permits you to check the status of a journey by its train number.

It's also wise to check using the name of your chosen airline, your destination airport, and any public transit systems you plan to use.

Additionally, hotel staff can be an invaluable source for news on the ground as well as for advice about how to sidestep travel inconveniences.

We know—it's frustrating to keep hearing that the key to solving modern travel mishaps is to be patient and flexible, but it's simply the case.

We happen to be living through a momentous period of economic shift, and smoother sailing is still on a distant horizon. Be prepared, be proactive, and don't lose your marbles if you get caught up momentarily in the gears of change.