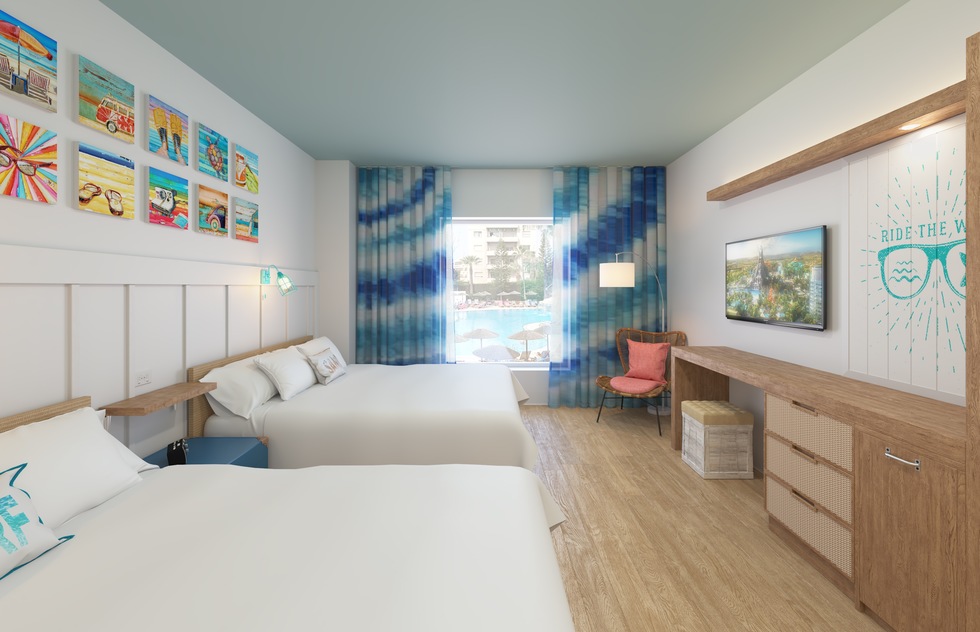 For at least twenty years, Universal Orlando Resort has been on a hotel building spree. One after another, giant lodging has been squeezed onto its grounds, supplying close-at-hand rooms to would-be visitors.

In hotels supplying thousands of rooms, Universal is approaching (though it obviously hasn’t yet reached) the number of hotels on the grounds of Disney’s parks, 15 minutes away by car.

It’s clear that Universal’s policies in this regard have not yet enabled it to match Disney in the total number of visitors it receives. And that’s apparently one of the reasons why Universal has just announced a startling new price point for two of its forthcoming lodgings.

At the new Endless Summer Resort, which will begin opening in stages in August 2019 but is accepting bookings now, some 2,800 rooms will be priced at a spectacular starting point of $73 per room (a rendering is pictured above), while some additional two-bedroom suites perfect for families will cost as little as $111 per unit.

Moreover, additional Universal hotels will have rates to match, meaning that of a total of 9,000 rooms at Universal, some 5,600 rooms will soon be budget priced.

Universal now competes with Disney’s well-known All-Star and Pop Century hotels that service cost-conscious visitors. However, at Disney, standard rooms start at $110 and usually cost much more. For nearly the same price, Universal’s new hotels can supply a two-bedroom suite.

Henceforth, you will want to keep in mind that Universal has inexpensive rooms to rent, and you may rely on that fact when making your vacation choices. But will the new policy enable Universal to creep closer to Disney in overall popularity?

That’s difficult to answer. Of the two separate halves of Universal Orlando, one of them—Islands of Adventure—is of controversial appeal. Its appearance is regarded by many visitors as rather honky-tonk in nature, crowded with commercial shops, and even the much-acclaimed Harry Potter exhibit is often a disappointment to people like me above teen age, relying on nausea-creating speed facilities in its main castle. The primary emphasis in Islands of Adventure is on thrill rides, and one does not need to travel to Orlando for those.

Still, the decision to create budget-priced hotel rooms in and near Universal is a plus, improving its appeal.