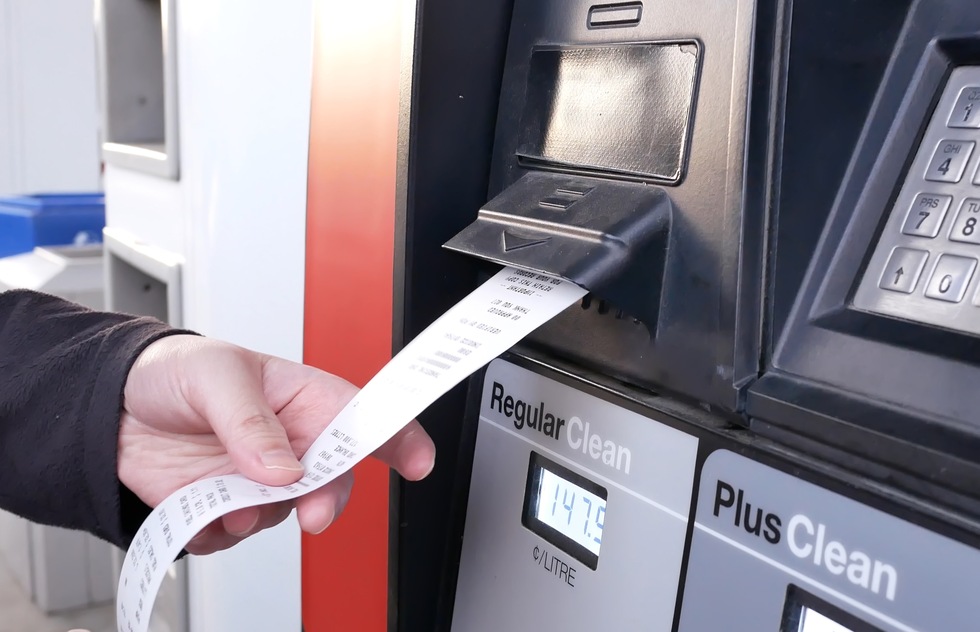 American rental car companies have been doing it for more than a decade now.

When customers rent vehicles, clerks frequently say that if the car is returned with a full tank of gas, then the renter will be required to produce a receipt for the gas purchase. More specifically, the receipt must be from a gas station within a certain distance from the rental agency.

It first happened to me in 2011 at a Thrifty Car Rental in Tulsa, Oklahoma. Back then, the rental agency even stamped a big warning on my receipt, but only after I signed the rental contract.

Spoken warnings about fuel receipts are still being given. Last month after landing in Orlando, I declined to purchase Thrifty's overpriced prepaid gas option. That's when the rental agent informed me that if I deigned to fill my own tank, then I'd have to fill up within 5 miles of the airport and furnish a receipt to prove it.

I didn't like it, but for the sake of better gas prices I did as told, even though it required waking up 45 minutes earlier than I'd planned and doing advance research to map out a viable gas station within the ordered 5-mile radius.

But when I turned in the car at the airport, the associate who checked in my vehicle didn't want to see my receipt.

It was annoying enough to discover Thrifty had assigned me a runaround that its staff had no intention of validating.

But also, no one likes feeling misled. So I looked closer at the rental contract I had signed.

My written agreement said nothing about gas receipts or a 5-mile radius. I declined Thrifty's refueling options and returned the car with a full tank, so my rules fell squarely into option 1—and that made no mention of fuel receipts:

It was almost as if informing me I'd have to procure a receipt was just a way to intimidate me into prepaying for gas at Thrifty's rates.

I asked the corporate media relations office at Thrifty, which is owned by the embattled Hertz Corporation, whether the company considers verbal instructions to be part of a contract, or if only the written Terms & Conditions, which are agreed to by customer signature, are considered legally binding.

Notice how the T&Cs Thrifty sent me do not match the contract that I was given as a customer (above).

As you can see, Thrifty's supposed corporate T&Cs don't match the contract I was given. They don't even match what Thrifty's employee told me to do. I was told my gas station should be within 5 miles, not 10.

Regardless of what Thrifty's corporate office says are the rules, Thrifty customers are signing contracts that do not require fuel receipts.

Thrifty has had more than a decade since the introduction of this policy to add language about fuel receipts to rental contracts. Perhaps the lapse is an oversight, but there also might be legal reasons why the company hasn't made the change.

There are other ways rental car companies' demands for fuel receipts are slanted against consumers.

For one, companies want to make sure fuel tanks are returned as full as possible, but renters are not afforded the same guarantees when they drive cars off the lot. When checking vehicles out, renters are not allowed to watch the rental companies top off the tanks.

Worse, the car companies' receipt demands might require eligible gas stations to be within a certain distance from the rental lot, but like Dollar's policy, they don't always require that the fill-up happen within a certain time frame. A customer could fill up within 5 miles, yes, but they also could have done that a week ago and driven a lot since then. Without a timing element, a receipt alone doesn't prove the tank was full when the car was returned.

If you spend even a few minutes looking into consumer reaction to this issue, you'll see complaints from renters who balked at the demand for a fuel receipt but can't find the stipulation confirmed in their official contracts.

Customers seem to take it as gospel that they are legally required to provide fuel receipts. But time and again, the requirement is not in the contract.

Contracts will almost always require customers to return cars with a full tank if they don't want surcharges, but many contracts have nothing to say about fuel receipts.

Put simply, in many cases customers haven't agreed to that condition with their signatures.

Basic contract law says that if an agreement is not in writing, it's up for dispute.

Now, if such a demand is indeed in your contract and you sign it, then you're unquestionably on the hook. Take the official policy from Avis, which slaps on a $16–$18 fee through its EZFuel program if you drive less than 75 miles without a gas receipt. It's annoying—but the company warns you about the policy in print and you sign to agree.

It's another matter entirely if a rule isn't listed as part of your agreement.

For almost a decade, customers across the United States have been led to believe that producing a receipt for fuel is part of the agreement.

Read your contract. The receipt requirement might not be there.