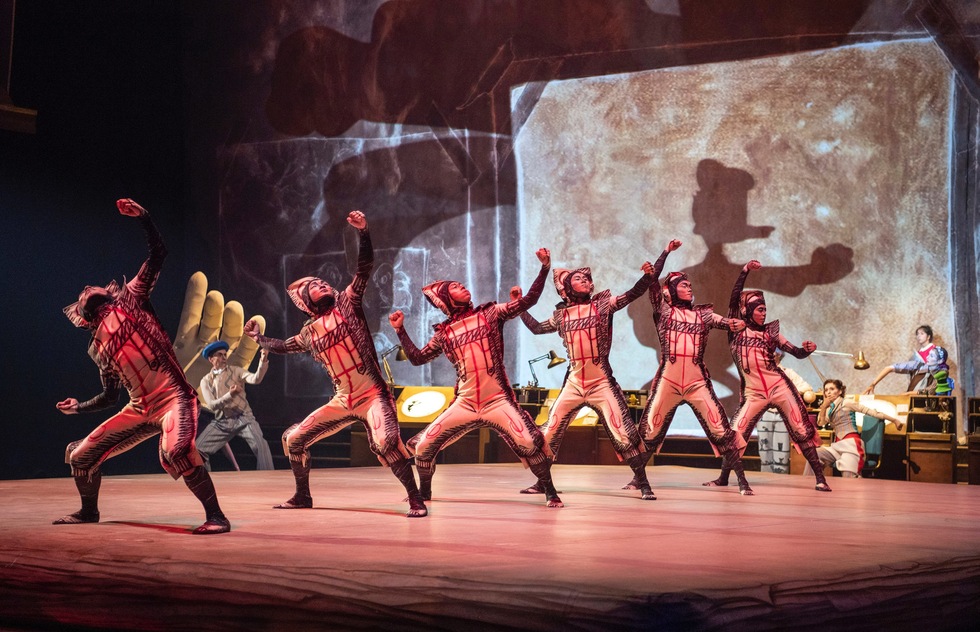 At the end of 2017, French-Canadian entertainment juggernaut Cirque du Soleil closed La Nouba, the family-friendly acrobatics spectacular that played on Walt Disney World resort property for nearly two decades. When the lights went out, Cirque promised that a replacement show was in the works.

That was nearly four years ago. Cirque's custom-made arena on the West Side of Disney Springs fell eerily silent as plans for the new production stretched, stalled, and fizzled. In 2019, Disney announced that the Cirque troupe was deep in development for a show that, unlike the generic La Nouba, would have permission to use the catalog of Disney animation as inspiration.

The first preview performance was announced for March 20, 2020.

A lot has happened since then. Disney World closed down, and so did Cirque, shuttering 44 shows around the world, gutting its employee roster, filing for bankruptcy, and ultimately surviving through a sale to its creditors.

Rebirth is painful, but one often returns the richer for it. On November 18, 2021, Drawn to Life finally debuted at Walt Disney World's Disney Springs.

I don't know how much of the show was sharpened over the pandemic, but the result isn't only something that was worth the long wait. It's also a beautiful statement on loss, on healing through the creation of art, on perseverance, and on the power of emotional support. I’ve never been touched by a Cirque show before, but this one choked me up.

All Cirque productions are essentially modernist vaudeville revues. We see a series of acrobatic acts that are linked by vignettes of European-style clowning. But Drawn to Life adds a unifying concept—a little girl loses her father but finds self-discovery and consolation in the hard work that animation requires. 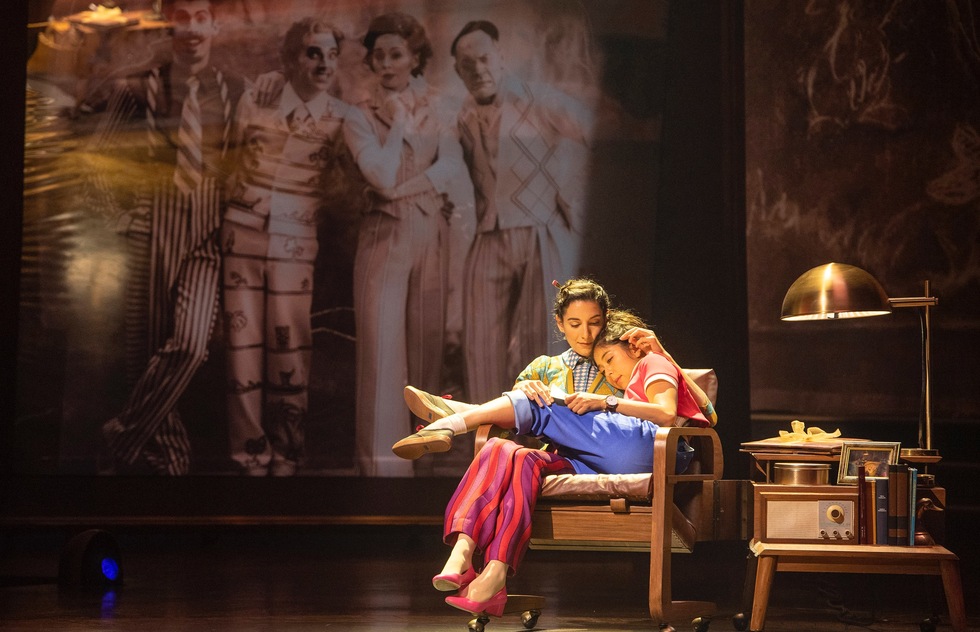 In Drawn to Life, each feat of physical derring-do serves to fortify, sometimes in a symbolic sense, the basic tenets that animators use to make their work feel more authentic.

On the walls of the lobby of the newly renovated theatre (in which there's not a bad seat in the house, only more distant ones), audiences can find "Principles of Animation," a glossary of some of the technical terms that Walt and Roy Disney first learned to master a century ago in their quest to make cartoons seem lifelike. For example, well-animated objects don't simply travel unchanged; they "squash and stretch" as they encounter things. Characters don't have emotions by themselves; their onscreen friends mirror the core emotion with "secondary action." And so on.

The union of Cirque du Soleil and Disney animation might sound at first like a forced marriage, but in practice, the deft elegance of the athletics and the semi-mystical symbolism of Cirque clowning pair beautifully with the laborious but ultimately inspiring process of hand-drawn animation.

So when a fleet of floor tumblers pours onstage and each member strikes a slightly different pose in imitation of a Donald Duck projection that moves behind them, the audience can see, through heart-racing kinesthetics and without any dialogue, how the illusion of movement through stop-motion animation works.

Like a lot of Cirque, what sounds odd on paper is in fact stirring in action—the villain, Miss Hesitation, is a giant wadded-up piece of paper with an eraser for a purse, and she represents self-doubt. In one of the show's most exciting acts, her minions of self-censorship ride a massive windmill-like apparatus with huge blades dominating the stage. 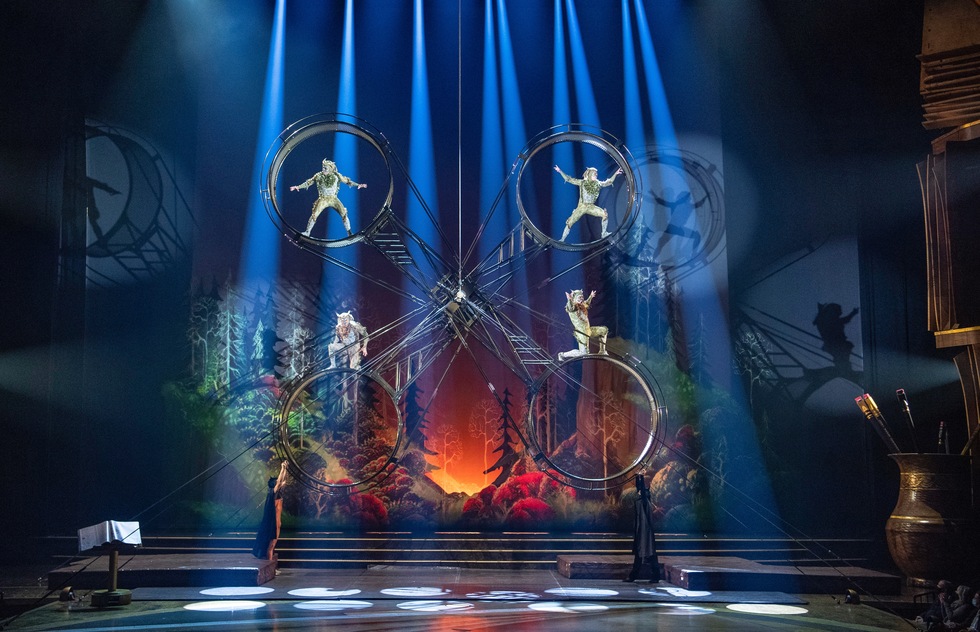 It's weird, as Cirque often is, but there's also an unspoken intelligence in it, and when you deal in allegory, the resonance has the space to become profoundly richer for each individual viewer.

Each acrobatic act strums a different aspect of human yearning, mirrored in the little girl's gradual discovery of how animation works. A Spanish aerialist learns how to ride and tame a giant "pencil." Evoking a sense of joy and play, a Japanese unicyclist dressed like Pinocchio's Blue Fairy merrily jumps rope on one wheel. A team of Russian swing gymnasts stands in for the little girl's yearning to illustrate herself flying into the arms of her missing daddy. 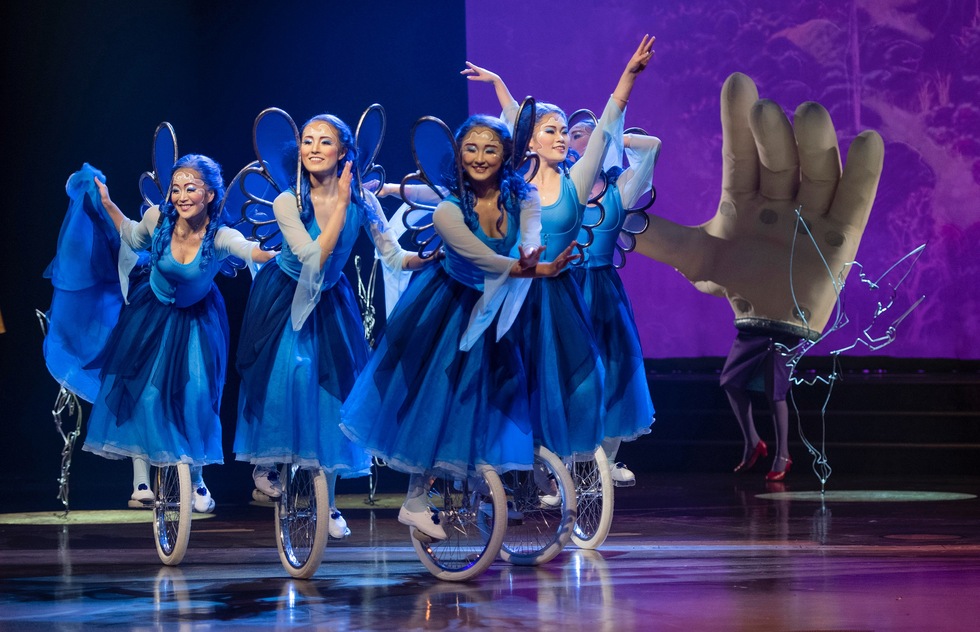 This is a kid-friendly show (the puppetry in particular is surprising and fantastical) so while there is some aggressive swinging from the rafters, in general the choice of physical feats goes easy on the testosterone. And given the personal theme, that works.

One of Drawn to Life's highlights, an ethereal and heartbreaking pas de deux between a woman made weightless by the love of her husband, is a beautiful encapsulation of romance and mutual support. Seen in the light of the pandemic, during which so many of us have lost lovers, friends, and parents, even this less showy moment becomes as haunting as the now-classic wordless montage from Pixar's Up retelling the story of Carl and his deceased wife.

Over time, Walt Disney World executives have authorized the removal of nearly every attraction that dwells on the decades of risky labors that form the foundations of the Disney empire. Modern Disney would much prefer for guests to spend money on the current marketing push, so, over time, animation exhibitions were closed, museum spotlights were whittled to nothing, and even bookstores containing the company's history were converted into dull souvenir stalls.

It's telling that it took a partnership with outsiders to revive a deep respect for the meticulous animation process—and to do so in a way that doesn't clobber you over the head.

When Disney tells its own story, it’s always “magic, dreams, imagine.” But Drawn to Life is more delicate than that. It’s no jukebox of worn Disney tropes and song snippets without emotional connection, as the resort's other nighttime spectaculars—Magic Kingdom's Enchantment and Epcot's Harmonious—have become. In fact, as a further sign of its self-confidence, this production has a score by Benoît Jutras, who dares to be original, only occasionally quoting Disney tunes as brief motifs.

The result makes Drawn to Life human, original, and metaphoric in a way Disney's parks rarely trust themselves to be anymore.

It took a long road to get here, but this is a show Disney should have had on its stages all along. In fact, it's a show that Disney itself used to be capable of producing.

Cirque du Soleil's fresh and perceptive exploration of what originally made Disney so groundbreaking is now the best show at Walt Disney World. 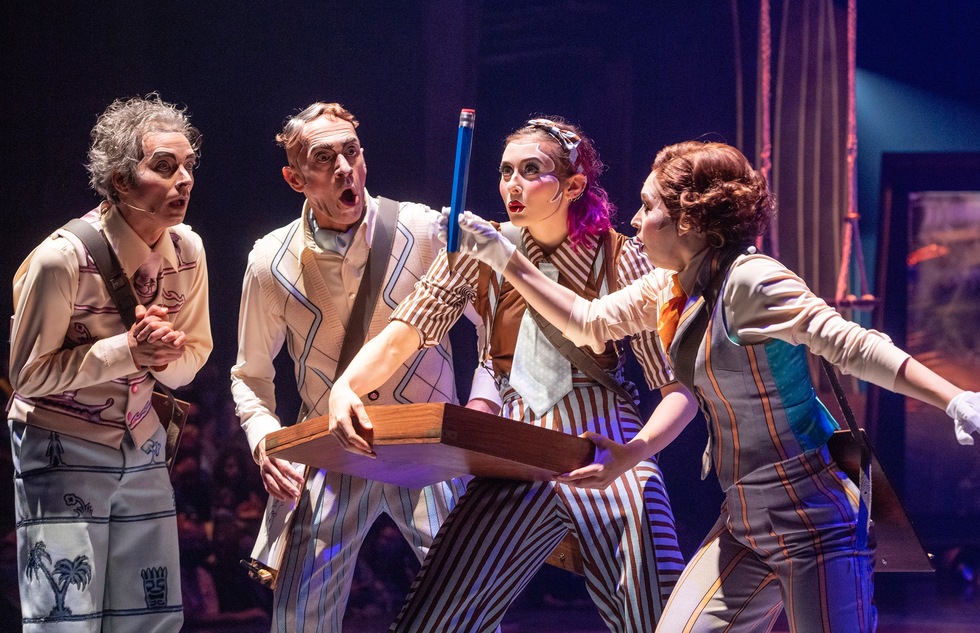