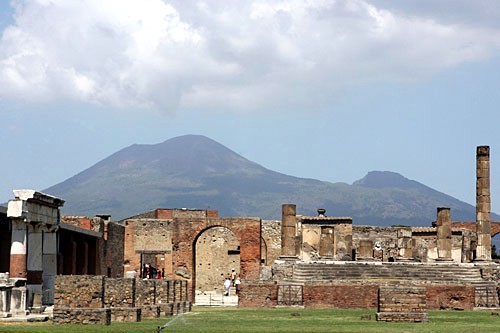 I have found it odd that in all the media coverage of the eruption of Kilauea on the Big Island of Hawaii, no journalist has drawn a comparison to the eruption of Vesuvius outside Naples in 79 A.D.

That may be because Kilauea is a “baby” by comparison with Vesuvius, the latter (pictured above) having become one of the greatest tourist attractions in all of Italy.

The cataclysmic eruption of Vesuvius gave the residents of Pompeii and Herculaneum only scant minutes to escape its fury. Today, on the grounds of Pompeii and nearby, one can still see the footprints of residents fleeing for their lives.

But most, nevertheless, were asphyxiated by a blanket of ash and pumice. Those materials also left intact for present-day archaeologists an amazing volume of everyday evidence of how life was lived some two thousand years ago.

All the so-called volcanologists are presently predicting that Vesuvius will erupt again, and fairly soon, with greater force than ever, endangering the many hundreds of thousands of residents in nearby Naples. Despite that likelihood, they all remain, pooh-poohing the fears of scientists.

The tourists also keep coming, several million of them each year heading to both Pompeii (several miles from Naples) and the city of Herculaneum (on the very outskirts of Naples, reached by foot from the center of the city).

I would skip Herculaneum, which really displays only the walls and floors of ancient Roman homes, in contrast to the many fascinating artifacts of life in the Pompeii of 79 A.D., a profound lesson for all of us.

Kilauea provides insights into the fragility of life on our planet. But it does so with much less effect than in unfortunate Pompeii.