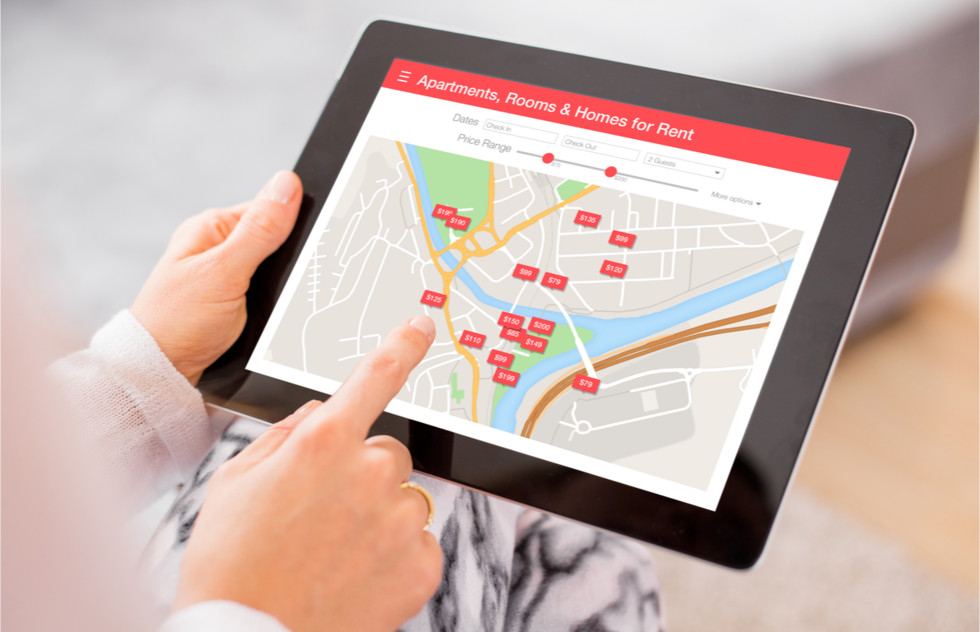 How Much More Expensive Is an Airbnb Than a Hotel Room? New Data

This time last year, I wrote a blog post about a survey that showed that a new winner had emerged in the long-standing battle between the hotel industry and Airbnb.

Thanks to social distancing concerns and a collapse of business travel, for the very first time Airbnbs became more expensive, on average, than hotel stays in the United States.

Then, I wrote the finding was "just a snapshot in time, and there’s no way of knowing whether hotels will regain price primacy."

Now a new analysis from the site Upgraded Points shows that not only is Airbnb continuing to out-price hotels (at least when home renters reserve full units, which is what 81% of them do), but it's also doing so in every state in the USA except for four.

In cases when travelers use Airbnb to stay in just a single room or suite within a larger home, Airbnb is usually the cheaper option, though sometimes by only a slim margin. That's pretty shocking considering the potential lack of privacy when you rent a room in a person's home—I consider that type of share to be just a half-step above hostel accommodations.

To come up with this research, Jillian Fellows of Upgraded Points told me that their team price-tested one date (Friday, September 17, 2021), and averaged the Airbnb rates she found, and then averaged those she found for hotels on the website Hotels.com.

She did this for the largest city in every state in the country, and in a few states, several large cities were included.

The four cities where whole-property Airbnb rentals were less expensive than hotels were Baltimore, Detroit, Las Vegas, and New Orleans.

In other cities, the cost differential was often huge. In Los Angeles, for example, the average cost for a home rental through Airbnb was $328 more, per night, than a hotel room. In Miami, the difference was $303, and in Houston it was $202.

Perhaps the most surprising aspect of this research: Prices are now very close for renting a hotel room compared to renting a room in someone's house. That option used to be far cheaper than a hotel stay.

Yes, in such hotel-rich cities as Las Vegas, you can still save big by accepting a share, but in Orlando, another city with lots of hotel rooms, you would only save $7.30 by booking a share instead of a hotel. In San Jose, the difference was $20.80.

I think the lesson from Upgraded Points' analysis is: Don't ever assume that share accommodations will be cheaper. Always check hotel rates to compare. 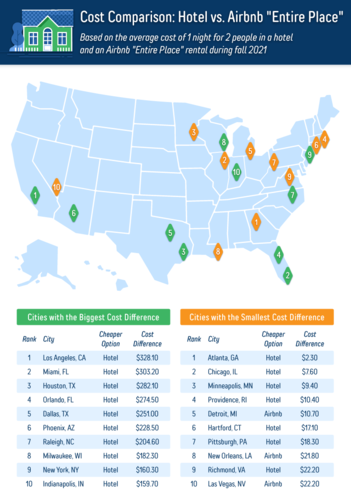 (Click here to see a larger version of this chart)

A Look at Fee Differences

Upgraded Points also looked at what percentage of the hotel and rental costs went to fees—and the differences were stark.

In many destinations, the amount charged on Airbnb was often double the rate that hotels were charging.

For example, in Birmingham, Alabama, where the fees were second-highest in the nation for hotels (at 22.62% of the nightly hotel rate), Airbnb fees and taxes still came in at 45.87% of the nightly charge.

But that number pales in comparison to the fees that are being charged by Airbnb in Orlando. In that theme park capital, Airbnb's fees and taxes were a stunning 53.31% of the nightly cost.

The fees were even high for people who rented a single room in someone's home. Sharing a stranger's home in New Orleans still racked up fees equal to 46.77% of the cost of the rental. In Seattle, the fee rate was 45.83%.

The city with the highest hotel fees and taxes was Las Vegas at 22.62%.

Thank you to Upgraded Points for this useful analysis. As I said in 2020, I'll be keeping my eye out for more intel about this ever-evolving price war.