If There is Anything to Get Exercised About, It's the Possibility that In-Flight Use of Passenger Cellphones May Soon be Authorized 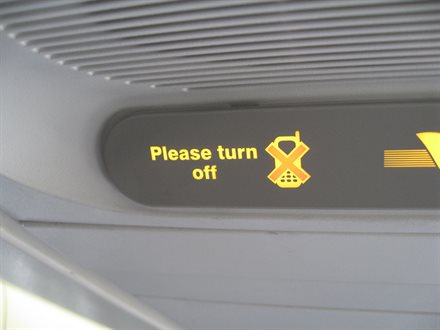 As Americans, we frequently write to our representatives in Congress and tell them how we feel about various vital issues, in an attempt to influence their actions.  But if there is any one topic on which a public outcry can affect government policy, it's the question of whether airline passengers should be permitted to make and receive cellphone calls in the course of a flight.  A recent announcement by the incoming chairman of the Federal Communications Commission, implying that the ban on such phones might be lifted, has set off a storm of protest more violent than any I can remember.  And I'm betting that if those protests continue in number and volume, they will prevent this assault on our privacy in the air.

One such outcry was mailed in to the radio program that my daughter and I conduct every Sunday afternoon.  Phones on airplanes?  The listener was livid.  "Oh, no!" she wrote.  "Not there!  Please let our voices be heard, but only on the ground.  Being exposed to vulgarity, to crude, loud passengers only an inch away, and for two-to-fourteen hours, is the ultimate indignity. It's a nightmare!  Passengers, unite!  Already we flyers have less and less leg room to ourselves; we obviously don't want our hearing to be invaded, too!"

It's a mystery as to where the proposal to permit such phone calls came from.  Just several weeks ago, in allowing the use in the course of a flight of such benign digital devices as tablets and e-readers, the Federal Aviation Authority was careful to exclude cellphones from the list of gadgets that would now be tolerated aloft.  So why should the aviation laymen on the Federal Communications Commission decide otherwise?

In fact, they didn't.  Within hours after the FCC announcement, its chairman hastily explained that his commission didn't really have any power to legitimize use of the phones; they were only planning, he said, to express a scientific judgment that use of those phones posed no danger to the electriconic instruments on the plane.  It would be up to each individual airline, he continued, to decide on their policy regarding cellphone use.  As for his personal views, he went on, he didn't favor the use of cellphones in flight.

One such airline, Delta, immediately announced that it would not permit phone calls to be made or received in flight.  But numerous other airlines, all attempting to test the waters, were less decisive.  One or two said they were seriously considering lifting the ban.

I fervently hope they don't.  The idea of being forced to listen to a seat-mate's conversation over the phone for the several hours of a flight, is enough to make you stay at home.  And we all know that many garrulous Americans will like nothing better than to make a series of lengthy phone calls as a means of avoiding the boredom of air travel.  Imagine the cacophony if several such persons sitting nearby all take out their cellphones at the same time--as they assuredly will--and make calls to friends and relatives down on the ground.

Those of us who frequently travel by train are long experienced in this interference with our privacy rights; it's terrible to seated next to a cellphone user.  At least on many trains, there's a "quiet car" for which we can opt, where cellphone use--as well as loud conversations--are banned.

But obviously, there's no escaping these disturbances in a plane.  So for heaven's sake, F.C.C.  Damn it, F.A.A.  Keep those cellphones tucked away in the course of a flight.