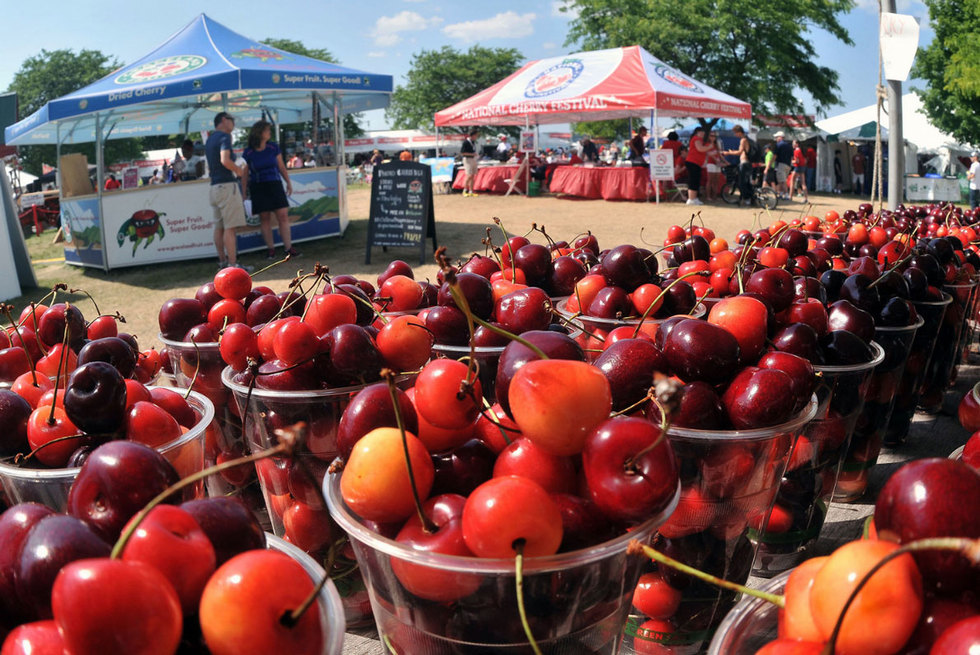 It’s the Pits! The Cancellation of the National Cherry Festival Is Personally Saddening

About four years ago I learned that I was a failure.

At cherry spitting, that is. No matter how much I tried—and I lined up four times to show off my non-skills to a judge—I couldn’t propel the pit more than about two and a half feet. A 10-year-old behind me couldn’t contain his giggles when my spit sprayed much farther than the pit, which dropped right on my sandals.

Who cares? I tried and tried again. And even in failure I was having a helluva time, not just with the pit spitting, but with the gluttonous cherry sampling at tents set up hither and thither. There were lip balms and liqueurs and jellies and salsas, barbecue sauces next to cherry-studded sausages, pies, and hot cocoa mixes. Oh, and who could pass up the aptly named Ruby Red Morsels of Joy (aka dried cherries)? Yum! And yuck, in a few instances—I’m looking at you, cherry gorgonzola dressing.

There were some real thrills, too, from the extraordinary display of the Navy’s elite synchronized flying team, the Blue Angels, to the world-class musical performances every night on the big stage.

And because the Cherry Queen and Cherry Princesses are chosen for their knowledge of the local fruit and not because they're statuesque glamazons, it was a personal thrill for me to get to take a photo with the court—and tower over many of them even though I’m only 5’3". (Yup, I had to post the photo below). The delightful Cherry Queen I met told me that she worked as a nurse when she wasn't royalty. She was wonderfully personable, with a delightful sense of humor, and a truly awe-inspiring knowledge of everything cherry. 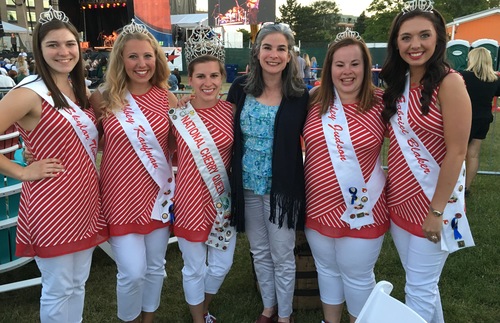 But what really made this festival come to life was the unapologetic Americana of it all. The Stars and Stripes whipped in the wind wherever you looked, tradition after tradition was enacted with full-blown commitment, and nobody got cynical about oompah music, marching bands, and firework shows. People were happy to be there, happy to greet neighbors, and happy to welcome strangers like me, by showing off the boutiquey, charming Traverse City, and Lake Michigan’s cool-breezed, bluer-than-blue pulchritude.

It was the best of America.

But this festival, like so many other summer delights—New York City’s Shakespeare in the Park, Massachusetts' Berkshire Theatre Festival, Chicago’s Blues Fest, and the New Orleans Jazz and Heritage Festival, to name just a few—is not safe in these times of pandemic. And so the cherry festival is being scrubbed off the calendar. As it should be. Human lives must come first.

But I hope, in the middle of these dark times, we can hang onto some of the joy, the love of the arts (culinary, musical, what have you), and inclusivity that these festivals promote.

It's the feeling that strangers can become friends, if only for a moment, by gazing up at an aerial square dance of jets, by swaying together as an outrageously talented American Idol runner-up croons his heart out, or by chuckling as an out-of-place New Yorker tries to beat the locals at cherry spitting. And fails. Happily.