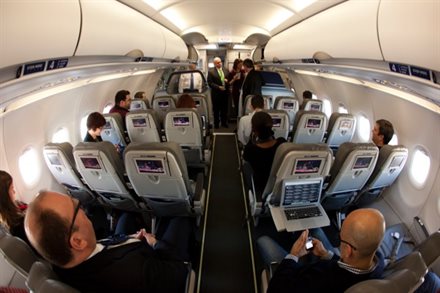 It's no secret that the major airlines act like lemmings. One adds a baggage fee and the next follows. One throws a sale, and soon the whole pack is in.

But for once that may be a good thing, because yesterday JetBlue announced that it would be eliminating one of the most loathed flying fees: Wi-Fi connectivity. It will be offering its "Fly-Fi" for free aboard its entire fleet.

And this ain't "GoGo-gone" quality Wi-Fi, where every passing cloud or bit of turbulence seems to disrupt the signal (a problem with many of the paid service on other carriers). JetBlue is promising broadband connectivity, similar to what most of us enjoy at home, which will allow passengers to plug in several devices at once and, hallelujah!, even stream videos.

To offer the service, JetBlue has teamed up with Amazon Prime. The latter is promising that its members will be able to stream thousands of videos for free during flights, a potent marketing move for this expanding service.

Right now, JetBlue has Fly-Fi on its more-than-150 Airbus fleet. It says it will have the rest of its fleet equipped by the end of the fall.

(It also should be noted that currently, rival carrier Virgin America is offering free Wi-Fi in a program that's set to end in March of 2016. Let's home Virgin decides to make like a lemming and follow JetBlue's lead on this one.)