At a media event on the roof of its New York City headquarters today, set-price airline JetBlue, which since it inception has been a one-class airline, unveiled an overhaul of its seating.

Ostensibly, the event was to promote Mint, a new top-tier seating category designed to poach business from rival carriers on the NYC-LAX route—and, so far, only on that route. Starting at $600 one-way cross-country (who knows how much they'll be without that low advance purchase rate), the newly designed Mint area is all about the throne-like seats: The pod-like lie flat to 6 feet 8 inches long and have door panels that can be closed, creating a roofless, cubicle-like private area. And, oh--there's a massage button, too.

Those seats, which are very much like what you might enjoy in a first- or business-class seat on a foreign-flagged carrier, are a first for transcontinental American routes. The airline is hoping that they—and the snob appeal of being served by the first in-flight cappuccino and espresso machine—will help buoy sales and keep the once-budget JetBlue from being crushed by competitors that are favored more by business travelers. They begin flying in mid-June.

Airline officials frame the changes as a case of having to cave to the demands of the business travel market or risk being knocked off the playing field altogether. But they swear they won't be creating a true first class—to prove they remain egalitarian, they say, there will be no curtain to segregate the big-spending Mint passengers from the hoi polloi in back. (The photos it distributed do show walls, however; see below.) 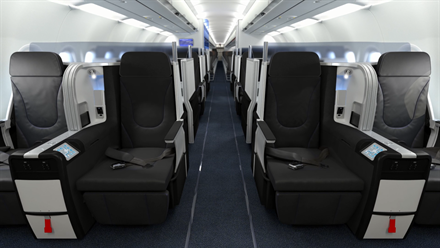 Most of us, though, will be flying in coach—which JetBlue doesn't call coach, but its "core offering." Fortunately, those seats are getting an upgrade, too.

The new seats are lighter (saving on fuel costs) and rather than being supported by a hard bottom, like most seats, they are suspension-based, like a wheelchair's springy pad. Airline officials swear, in polite terms, that will result in fewer sore rears.

Most interesting to budget travelers: The airline will be installing a power outlet for every seat in coach, and it will be nearly tripling its DirecTV channel capacity from 36 to somewhere around 100 channels (representatives aren't sure exactly how many yet). The TVs, too, will be enlarged to 10.1 inches diagonally, which officials say is the largest they can be given the seat size. This, when most legacy airlines in America have neither convenience.

The standard seats also have bendable head pillows to support napping heads and mesh pockets for bottles of water (hopefully, they will make the trays easier to put away when it's time to squeezing out for the lavatory).

The real test will be parking yourself in one of the new seats and seeing if your heiney is barking at the end of a long-haul flight. So far, no airline, no matter how much it charges, has managed to solve the posterior problem.

The new seats are being rolled out starting late this year; a timeline for full conversion of older planes hasn't yet been set, but since they will result in fuel savings, it's in JetBlue's interest to get them into the air as soon as possible.

Has JetBlue sold out and become a two-tier airline? Will you fly on its Mint seats, or are you satisfied with the upgrade to the basic class of service? 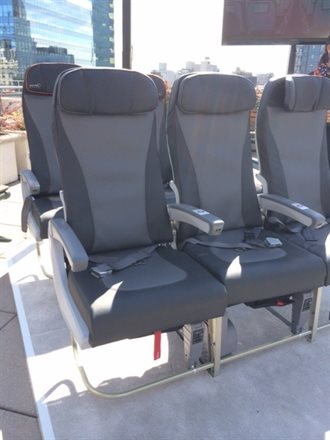 JetBlue's upcoming standard seat, with outlets under each one