Last-Minute Deals on Hotels Are Getting Better and Better! Here’s Why

Speak on a mobile phone instead of text? That’s considered a rude act nowadays in many circles. But while mobile technology has, arguably, made us less social, many in the travel industry say it has sparked spontaneity like nobody’s business. In just the last two years, a number of major travel companies have spent millions to launch app-only booking tools geared towards folks who have no idea where they’ll be sleeping that night.

These companies were, of course, answering a need on the supply side of the travel industry, too. When a hotelier hasn’t sold all his rooms for the night, he’s losing money big time. So most are willing to discount heavily to book a room at the last minute.

With that in mind, the app Hotel Tonight launched about three years ago, and soon its users, including me, were raving about hotels that could be booked on the day of travel for 70% less than they were listed at just the day before. (I happily took advantage of that extreme price drop at a very lovely hotel in San Diego). In the last year, Hotel Tonight broadened its reach by allowing bookings of up to a week in advance, though its best deals tend to be for “night of” stays (more on that below). It has been followed (mimicked?) in the last year and a half with apps, or modifications to apps, from such big industry names as Booking.com (behind the app Book Now) and Airbnb, Priceline, Orbitz, Travelocity and Expedia (which all have tabs for bookings that are tonight and/or nearby). 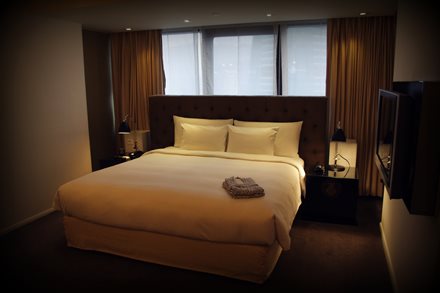 “Spontaneous travel is a natural extension of having this wonderful tool in the palm of your hand,” Paul Hennessy of Booking.com told me. “You’re at a concert in a nearby city and with the app on your smart phone, instead of taking the long drive home, you can book in a flash and relax in a nearby hotel, making the evening even more special.”

Not all the apps are alike, of course. In a quick test that I did for stays in my hometown of New York City, prices varied greatly when I tried to snag a budget-priced room for the night I was writing this article. I was offered a room within a private home for $55 (from Airbnb), a decent hotel on the funky Lower East Side for $80 (from Booking Now) and more expensive rooms from the other contenders. That being said, I was surprised to see some extremely nice properties discounted to just $99 by Hotel Tonight. Had I actually been booking, I likely would have splurged on the latter.

Alas, I didn’t get to see more than that one hotel option on Booking Now. For the convenience of its users, it only shows them rooms that are right nearby and that fit the criterion the user inputs when she downloads the app. For me that was “free Wi-Fi” and an “economy hotel”, but I could have request a 24-hour front desk, breakfast, workout room or more. Though that lack of selection made for a quick booking, I would have preferred having more options to peruse. Hotel Tonight shows all users properties in all categories, but insists that it, too, offers selectivity. “We don’t list every hotel out there,” says Hotel Tonight CEO Sam Shank. “Instead, the hotels have to match our standards, which are high, even for budget properties. We check all the hotels and only show photos that our staff have taken of these properties.”

With the competition getting stiffer, Hotel Tonight announced additional discounts at the end of January. According to Shank, 3pm will now be the “magic hour” for day-of hotel bookings, with even deeper discounts being added, at that time, by a number of properties. The app is also trying to lure folks to take last-minute trips they may not have considered by showing unusually low discounts (called “Bonus Rates”) to people who happen to be relatively near to a discounting hotel. So, for example, if you’re in Los Angeles you’ll see lower prices for San Diego or San Francisco stays than would someone in, say, Toronto.

Now, if only the airlines would start offering widespread last-minute deals again….