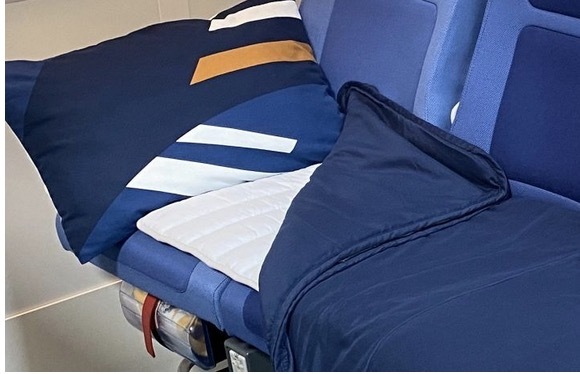 There's a moment in the film Crazy Rich Asians when it becomes clear that the modern-day Cinderella heroine has actually met a Prince Charming. Rachel, at the airport about to fly to Singapore, is laden with food for the trip, when Nick, her boyfriend, leads her not into economy class but into a super-glam private cabin where, soon, you see them cuddled in bed. You could feel the audience swoon, not just because the actors are hot but also because sleeping comfortably on a flight is the ultimate good-life fantasy.

Lufthansa may have the solution for those of us not heir to one of Singapore's greatest fictitious fortunes. The German airline has announced a pilot program for lie-flat travel aboard flights between Frankfurt and São Paulo.

The Sleeper's Row experience allows flyers to purchase an entire row; the airline provides them with a mattress pad (to cover the bumps between seats), pillows, and a blanket.

The cost of all this won't be anywhere near the price for reserving three or four seats. Instead, passengers will pay for one seat plus a reasonable supplement of $260 that gets them the rest of the row and bedding.

One odd requirement, probably tied to seating availability: Flyers must purchase the program at the airport. There are no advance reservations available for this. Assignment is first-come, first-served.

It's an intriguing experiment, and probably one that only works in these low-travel times while there are empty seats available. There's no way of knowing if Lufthansa will expand the program to other routes or if other carriers will copy it.

Air New Zealand has a similar program of its own, which it calls Skycouch, and frequent flyers have long had their own methods to attempt to secure an entire row to themselves without added expense.

And yeah, I know Sleeper's Row is not as romantic as having your own cabin and bed to share with Henry Golding. But heck, it's a start!