New Hotel Bidding Site Stayful.com Cuts Out the Chains and Slashes Rates on the Boutiques 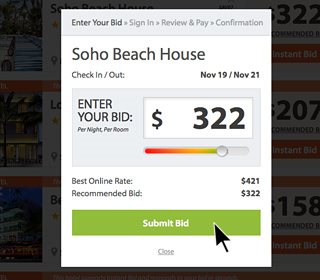 Although the big Web hotel reservations booking engines are undoubtedly helpful and convenient, they also tend to favor the same old corporate chains. But a newly launched booker aims to tap into consumer restlessness and cut those cookie-cutter Sheratons and Marriotts out of the running, giving boutique properties a leg up in pitching for last-minute business.

It’s called Stayful.com, and it was co-founded (with much outside investment) by a former president of Hotels.com and another exec from Expedia and Hotwire. In other words, they know the online reservations game, and for their own project, they wanted a new playing field.

Stayful specializes in four-star, boutique hotels, offering rooms over the next 30 days from when it's checked. And because availability is restricted to the next month, hotels are more likely to make a deal rather than risk their rooms going empty.

Unlike Priceline, a suggested rate (selected by an algorithm, not supplied by the hotel) is posted, but you’re welcome to try for lower if you think your bid will be accepted. The site also posts a typical rate found on other sites as a benchmark—but do your own research to verify for yourself. It’s helpful to see that suggested rate so you can figure out a ballpark starting point. Other travel auction sites don’t have that feature.

Stayful claims you will save money. When it beta tested among a small number of customers over the summer, the company says, the final rate paid was an average of 27 percent lower than the lowest available online rate. (Since testing was restricted to a private group, I can’t verify that.) Still, one reviewer during the beta period reported failing to book a hotel at the rate suggested by Stayful, so its algorithm isn't perfect.

If your bid is rejected, you can’t bid again on that boutique hotel for 24 hours. However, the hotel may come back at you with a counter-offer—so you may still save money. And if you don’t feel like bidding—because hearing back from the property can take up to day, an annoyance—you can simply book you selected property at the posted rate.

The site currently covers cities most in need of some competition and savings: New York, San Francisco, Chicago, Los Angeles, Miami, and San Diego. By the end of the year, it hopes to have New Orleans, Seattle, Phoenix, and Washington, DC, on line as well, bringing the number of available markets to 10. Currently, the site has partnered with about 100 properties—not a lot, but a number that will grow if the concept proves itself. Recruitment may be assisted by the fact the site only takes 10% of the transaction price as commission, which is lower than the industry standard. It will also deliver bids to hotels that are not in the Stayful network.

Travel booking is a crowded field. But few sites have the audacity to shun the major corporate names. It’ll be interesting to see if Stayful can fortify that audacity with true savings and customer loyalty.