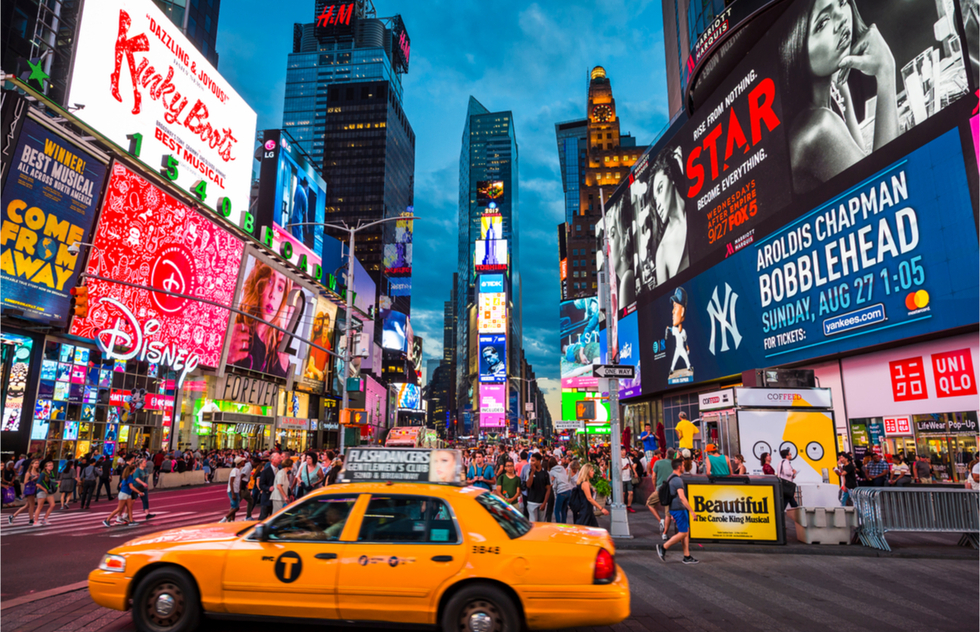 [Updated August 3: New York City will now require proof of vaccine to dine inside a restaurant or go to a gym or stadium. Complete details here.]

In the last week or so, New York City's major touristic institutions have put out a clear-as-gin signal that only vaccinated travelers will be welcomed.

On Friday, the Broadway League, which governs the mainstream theatrical industry, announced that if audience members want to enter any of the city's 41 Broadway theatres, then those playgoers will be required to prove they are fully vaccinated.

This follows a press release Thursday from the unions representing the actors and crew at those shows. The groups promise that all people working on the Great White Way will also be vaccinated.

The first Broadway play opens next week, but the majority of shows are set to return in September and October.

Audience members will also be required to mask up.

Broadway isn't the only performing arts institution in New York City that will require proof of vaccination. Earlier in the week, the Metropolitan Opera and Carnegie Hall both came out with the same decision.

Unlike Broadway, which is making exceptions for unvaccinated children and those with medical conditions that make vaccination inadvisable, both Carnegie Hall and the Met have said for the time being, they will not permit children under 12 and those who can't be vaccinated.

Some smaller music venues are also requiring proof of vaccination, including the Manhattan branch of the City Winery chain (despite the fact that its sister operations in Atlanta and Nashville are not instituting these protocols).

And it's been announced that vaccine proof will be required for NYC Homecoming, a series of concerts taking place in all five boroughs the week of August 18 featuring Paul Simon, Jennifer Hudson, Jon Batiste, Andrea Bocelli, Cynthia Erivo, and Bruce Springsteen (who was the first headliner to require proof of vaccination at his own Broadway engagement this summer), among others.

Restaurants, too, are trying to protect both staff and patrons by requiring proof of vaccine. I encountered that expectation when I went to Frenchette a month ago, but it's also a mandate at two similarly popular eateries, Estela and Dame.

On Thursday, famed restaurateur Danny Meyer announced that Union Square Cafe, Gramercy Tavern, and his other eateries (which are among the most celebrated in the city) would only accept vaccinated customers. (Eater NYC is keeping a running tab of which restaurants are now requiring proof of vaccine.)

Soon after Meyer's decision, Mayor Bill de Blasio tweeted support: "New York City fully supports this move. More businesses should mandate vaccines for the safety of workers and the safety of our city."

With these moves, New York City is inching closer to the way of life currently being experienced in France, Italy, Austria, Denmark, and other European nations. In those countries, citizens and visitors must show proof of vaccine to do, well, anything fun, including eating out, lifting a glass at a bar, going to a museum, attending a concert, or entering venues that draw crowds.

Which makes sense. Scientists are discovering the Delta variant is so infectious (according to a CDC document) that even vaccinated people can catch and transmit the virus.

The vaccine is protecting the vast majority of vaccinated individuals from severe symptoms, but to keep hospitals from becoming overwhelmed again, which would crowd out needy citizens with other treatable problems, more people need the protection of a jab.

With New York City's new rules, which keep the unvaccinated out of potentially dangerous crowds, citizens who have done the responsible thing and gotten their jabs can return to a more normal type of life and travel. The people who did the right thing will no longer be denied the pleasures of the city's social life.

For the majority of Americans who are vaccinated (only 56%, as I write this), these moves will be quite popular. When Frommer's posts articles about the cruise lines making cruising more expensive and cumbersome for unvaccinated travelers, the most common response in our Frommer's Roamer's Facebook group is: "Good!"

One member of the group wrote, "I have no sympathy for people making the choice to refuse the vaccine. Let them pay more. They should be barred from disembarking at ports. Their unvaccinated status poses a risk to themselves and others."

For now, New York City has decided it won't be a place where this type of risk is allowed—a move that should be applauded and will likely lead to an increase in tourist numbers as vaccinated travelers realize that New York City is a place that is looking out for them.