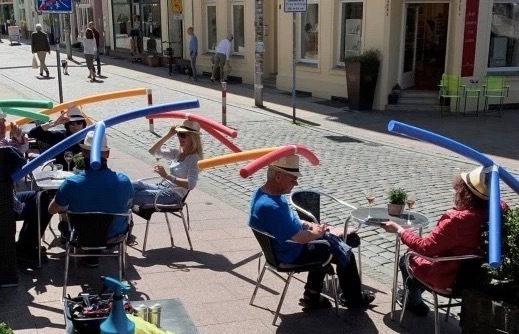 What's the new specialty at some of the world's restaurants? Extreme theatricality.

In an attempt to shield customers from the buzzkill of social distancing, restaurateurs are getting mighty creative.

Earlier this week, Frommer's wrote about a Swedish farm-turned-eatery and its nightly solo dinner service. That's just the beginning of a worldwide trend in innovation.

At Cafe & Konditorei Rothe in Schwerin, Germany (pictured), patrons are being asked to wear hats that have been outfitted with colorful swim noodles to ensure no one can sit too closely.

At Virginia's celebrated Inn at Little Washington, mannequins now lounge at most of the tables. Each dummy is dressed in spiffy 1940s attire (see below) as if they're out to dinner. The inn won't reopen until May 29, when it hopes to serve flesh-and-blood guests; right now, only outdoor service is permitted at Virginia restaurants. But owner Patrick O'Connell told the Associated Press that he came up with the idea now because it would "would allow plenty of space between real guests and elicit a few smiles and provide some fun photo ops."

"We’re all craving to gather and see other people right now," O’Connell said. "They don’t all necessarily need to be real people." 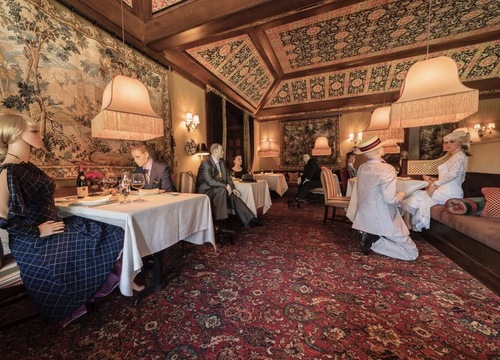 A similar tack was taken by the Open Hearth restaurant in South Carolina, where life-size blow-up dolls occupy some tables. People donated wigs and clothing and the owner reports that the dolls have "friendly faces." Judge for yourself:

At the Twisted Citrus restaurant in Canton, Ohio, the owner has installed sheer shower curtains between tables to shield customers from one another. "We are catering to the people who are comfortable to come out to a restaurant with precautions," co-owner Kim Shapiro told USA Today. "We’re trying to make our guests know that we’ve done something different and that we care." To keep the curtains disinfected, they will be sprayed with Lysol between seatings.

Finally, one highly pessimistic French design firm appears to assume this issue will be with us for years. The Christophe Gernigon Studio has come up with restaurant eating pods that allow guests to eat without breathing on their companions. The designer has named its creation Plex'Eat. It's an elegant solution, we must say—but then, we'd expect nothing less from the French. 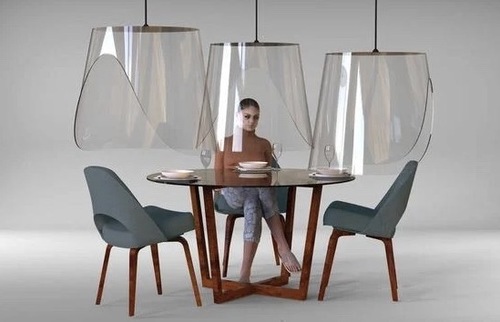 Take a look at this article for more. It's in French, but it's the photos that tell the story.