Priceline Ditches Its "Name Your Own Price" Program for Airfares. What's the Real Meaning of This Move for Consumers?

When Priceline launched its “Name Your Own Price” feature for airfare some 15 years ago, the effect was electric. A major company had pulled back the curtain, letting the public in on a dirty little secret no one in the travel industry wanted them to know: that prices were always negotiable.

But this week Priceline announced that it would no longer be offering bidding for airfares. Which raises the question: is William Shatner—the "Negotiator" in the company's tongue-in-cheek commercials—out of a job?

By which I mean: when it comes to airfare, has it gotten more difficult than in the past to game/negotiate the system?

True, airline tickets were always the ugly stepchild at Priceline. Bidding on hotels and rental cars yielded a pretty reliable product; since Priceline only dealt with major brands, users always knew they'd be staying in something like a Marriott, Hilton, or Days Inn, and driving, say, a Hertz or Avis car. You knew your ride would be well-maintained, and you could set the quality level and location of a hotel pretty reliably before booking. In fact, Priceline has said that bidding for hotel rooms and rental cars will continue.

Airfares, on the other hand, were always more of a crapshoot. A bid on a trip between Denver and Atlanta could yield a 10-hour ordeal, with an itinerary that routed you through Toronto. But though the itineraries could be hideous, the fares themselves often shone. So you'd think a reasonable number of travelers would put price over convenience.

Could it be, then, that the real reason for the shutdown of this service is that airfares are far less volatile than they were when Priceline launched?

I decided to research that round-trip jaunt from Atlanta to Denver for October, and found that only $5 separated the cheapest fares from most of the other rates (a few were $10 higher), with the price winner being upstart airline Frontier. But major players such as Delta and United only came in a little higher.

On other domestic round trips the result was nearly the same, though international fares were a bit more varied, thanks to such disruptors as Norwegian Airlines and Emirates Air, both of which are now under-pricing the competition deeply on the routes they cover. 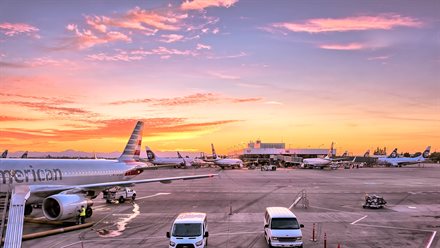 Could price fixing be the cause of these doppelganger fares? Some have accused the airlines of colluding, but the real explanation could be simpler: computers.

With the help of new technology, airlines have become far more expert at managing their inventory than in the past. That’s why flying next to an empty middle seat is about as common nowadays as flying next to a unicorn. The airlines now have the ability to accurately predict the number of passengers each flight will attract, taking into account seasonal dips, holidays and special events. With that knowledge they're putting more small planes in the skies than they used to (for less popular routes), reserving the big jets for flights they know will sell out. And with fewer empty seats in the air, the airlines don’t have to play chicken with the competition or throw big sales to fill them.

Perhaps most important is the fact that the airlines have drastically changed their business model in the last decade—they're now making nearly as much money on fees as they are on fares. With passengers ponying up extra to pick a seat, check a bag, jump the line, snag a pillow and blanket, change a flight….and the list goes on….airline execs can simply sit back and watch the money roll in. Desperate last-minute sales or undercutting the competition on base fares? Not as crucial to the bottom line anymore.

And so as we bid adieu to Priceline’s “Name Your Own Price” widget, let’s say hello to reading the fine print. Because today all of those nagging extras may factor in more to the ultimate cost of a trip than the actual airfare will.