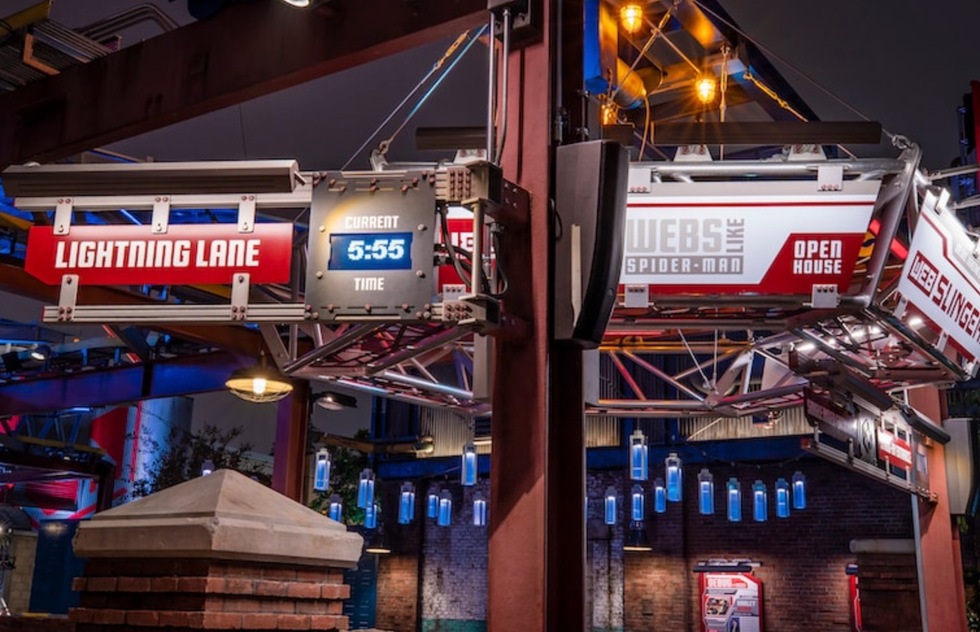 In October, Florida's Walt Disney World rolled out its paid version of the formerly free FastPass system, now called Lightning Lane. The Disney company had delayed expanding the new fee system to California's Disneyland resort—but as of Wednesday, December 8, the Genie is out of the bottle.

Genie+ and Lightning Lane have arrived in California.

Vacationers at Disneyland's two theme parks will now be asked to pay $20 a day ($5 higher than in Florida) to access appointments for shorter waits for rides using the new Genie+ feature, which is activated using the resort's official smartphone app.

Three of the resort's most popular rides are not included in that $20 fee. People who wish to wait in the shortest lines for Disneyland park's Star Wars: Rise of the Resistance and Disney California Aventure park's Radiator Springs Racers and Web Slingers: A Spider-Man Adventure (pictured above) will be charged between $7 and $20 per person, per ride, to access Lightning Lane. That's on top of daily admission, which in California now tops out at $224.

The traditional lines, called Standby, remain free, but now their progress will be slowed to give priority to guests who have paid extra for Lightning Lane.

Lightning Lane, which converted a beloved complimentary service into a profit center, has been a lightning rod for controversy, to say the least. Its Florida rollout was marred with confusion and snafus. Frommer's documented many of the early issues as they were reported by guests.

The rollout in California was even more chaotic, with widespread reports of a total failure of the Disneyland app that forced Disney to suspend Genie+ sales and issue refunds.

As that technological disaster unfolded, guests also cried foul over a perceived inequity of wait times.

Ok wow… the Disneyland app itself shows Rise of the Resistance right now at a 60 minute wait. But #DisneyGenie shows it at a whopping 140 MINUTES (!!) but with a $20 option to ride 3 mins from now.

I expect those hiccups to eventually be resolved, but the Genie+ basic design remains problematic for many. In Frommer's' own on-the-ground tests, we found the system to be unintuitive and often frustrating (last week, we published a story that followed one longtime Disney regular as she struggled to navigate the system's baffling interface).

Frommer's has full advice about how to negotiate Genie+ and Lightning Lane, but I can boil the essential principles down to a few essential tips:

1) Don't buy Genie+ if you arrive at the park late. Guests start snapping up ride reservation time slots as soon as they arrive, which pushes time slots later and later in the day. Because you can't use a second Genie+ Lightning Lane reservation until you've redeemed your first one, you could wind up with hours of waiting time, devaluing your purchase.

2) As soon as you use one Lightning Lane reservation, snag another for a ride that's available soon. The best way to maximize Genie+ is to "stack" reservations, booking one after another. Try not to book a time slot that's hours in the future—to get the most bang for the buck, keep your reservations rolling.

3) Don't bother buying Genie+ unless it's a busy day. (At Disneyland, though, most days are busy.)

The guests who go to Disneyland tend to live more locally than the guests at Walt Disney World do, and so I expect the reception to be much different in California. Many Disneyland visitors will go to the parks multiple times a year, so I think they're much less likely to feel the pressure to pay extra for short lines.

Will Lightning Lane strike out on the West Coast?