Though Harry Potter Has Garnered All the Raves, The True Hit Attraction of Orlando's Theme Parks is Disney's Soarin'

In the bitter competition between theme parks in Orlando, Florida, the Harry Potter exhibit at Universal Studios' Islands of Adventure has recently scored a public relations victory.  Journalist after journalist has weighed in with the conclusion that Universal's Harry Potter is currently the outstanding attraction in America's theme park capital.

I went to the Harry Potter exhibit last month and couldn't disagree more.  To me, Universal's Harry Potter evinces a complete lack of imagination.  In keeping with Universal's obsession with roller coasters (it has several of the most scary rides in America), the designers of the Harry Potter show have focused the Harry Potter exhibit around a terrifying ground-floor journey through the castle of Hogwarts (the school for wizards) that subjects the visitor to such violent lurches and plunges, twists and turns, ascents and descents, continuing at such high speed for a full five minutes, as to leave anyone over the age of 19 with frightening dizziness and nausea.  So explosive are the dips and drops and banks of that ride (for which you're first carefully locked in to your seat) that one really can't absorb the photos from Harry Potter movies that periodically appear at the side of the ride.

And it is that ride that is the much-emphasized highlight and dramatic focus of the entire Harry Potter area. So score another roller-coaster-type experience for Universal, having almost nothing to do with Harry Potter.

Apart from this extraordinary ordeal, what does Universal display in its Harry Potter space?  It does have the impressive replica (exterior only) of the gigantic Hogwarts castle, but then devotes the rest of the area to shops selling Harry Potter memorabilia (wands, black scholars' cloaks, and the like).  There's also a merchant who sets himself up next to a cask of Butterbeer costing $5 a glass.  And there's a small stage on which actors cavort about in Harry Potter costumes, in short tableaux having nothing whatever to do with the plot or themes of the Harry Potter books.

Apart from the fleeting references to Potter, nothing really tells the story, or portrays the various characters in the monumental best-seller series, or does anything else that has anything remotely to do with Harry Potter.  Instead, visitors are directed to the castle entrance, told to leave their bags and purses in lockers, and are then locked in to those seats on the contraption that proceeds to sicken them.

Universal thus shows itself to be the nation's bastion of roller-coaster frights, but of little else--it has, in this exhibit, nothing related to thoughts or insights or humor or drama.  Islands of Adventure is elsewhere so crammed with stores occupying every inch of space that it has acquired an atmosphere that can only be described as honky tonk.  The failure of journalists to properly assess the failures of Harry Potter is, to me, inexcusable and incomprehensible.

Meanwhile, across town from Universal, in the far more tasteful precincts of Walt Disney World, Disney has an exhibit that provides a true and memorable cultural experience.  Its Soarin' ride in a simulated aircraft far above the coast of California exposes the audience to dips and climbs, but nothing of the extreme level of Universal's Harry Potter.  Instead, you experience what human beings have never been able to have before: a view of how the earth appears to someone flying over it, in sustained fashion, from a height of several thousand feet.  You look down at jagged mountains, at giant forests from treetop level, at coastline surf and ocean waves, at human creations like an aircraft carrier, the skyscrapers of San Francisco and Los Angeles, the scene that a helicopter has while zooming over terrain, the view of a small-plane pilot in an aircraft over the earth.  And what you see is so enthralling, such a feat of high-altitude video, that you step off the ride wanting to repeat it.

Soarin' is so popular that it is virtually impossible to see it if you do not secure a "fastpass" for your admission, early in the morning of your Orlando stay. 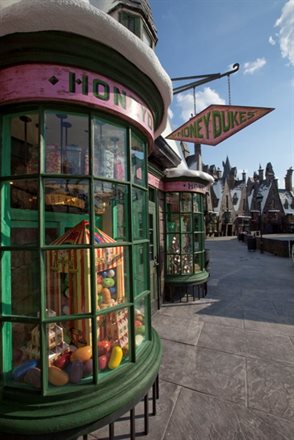