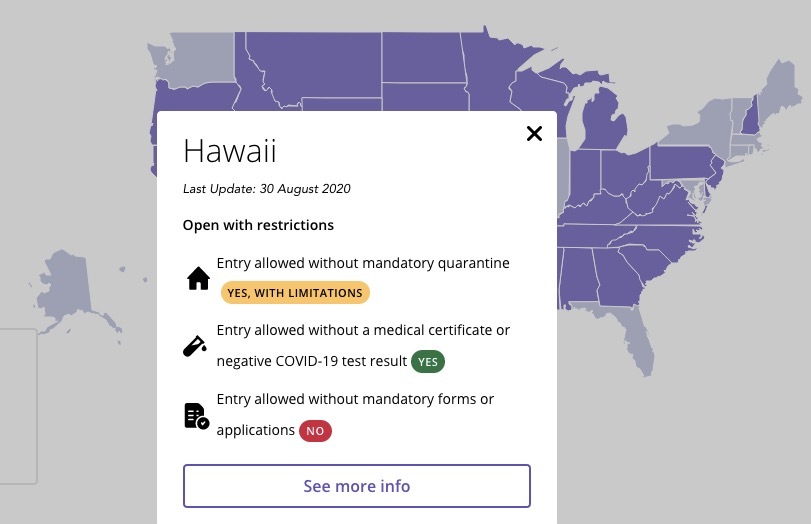 Each American state has its own approach to viral prevention, which makes traveling in the USA tricky.

Many issues can complicate even a 20-minute, cross-border drive, including varying quarantines, mask requirements, and different testing expectations. A Pennsylvania resident going across the border to visit her aunt in Maryland, for example, would be required by law to have taken a Covid-19 test within 72 hours of starting her trip.

Early in the pandemic, the National Governors Association created an interactive map to answer all these questions. Unfortunately, that hasn’t been updated since July 21.

The organization's press secretary, James Nash, told me the association had temporarily shifted resources away from the project but that it will begin updating the map regularly again beginning the second week of September.

But until then (and just in case the NGA's plans change again), private companies in the travel sector have stepped into the breach to create their own maps. They're helpful, but still have problems that prevent them from answering questions fully for travelers.

United Airlines posted its map (pictured above), which is as elegant and as user-friendly as the governors' map. The initial screen shows, via color coding, whether a state is "open to visitors" or "open with restrictions."

Once a state is clicked, a box pops up with basic information. A second click on that box displays a concise list (see below) that answers questions about what travelers can expect on the ground. Will there be restaurants open? Are hotels accepting visitors? The map also includes links to governmental websites, including links to forms that must be filled out, if any, before an arriving visitor is granted entry. 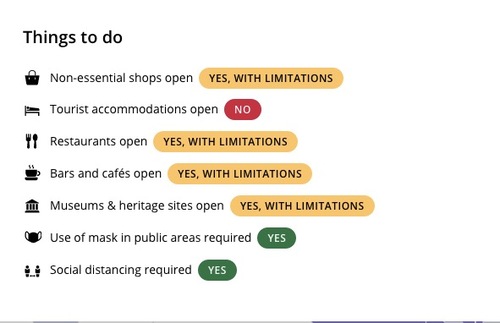 Unfortunately, after launching the map with much hoopla, United, and its partner Content Trip Solutions S.L. (Smartvel), haven’t been conscientious about updating the information.

Right now, the site notes when the material was last reviewed and when it was last updated. But clearly, the reviews aren’t catching all of the necessary updates. For New York State, for example, the site claims that all museums and cultural sites are closed, despite the fact that the governor gave them the go-ahead to reopen at 25% capacity on August 17.

United's map gets restaurant advice wrong, too, listing both New York and Massachusetts as fully open when in fact both states are limiting capacity in significant ways—although for Louisiana, the site got the same category of information correct.

United's facts are messy, but fortunately, there's a second option.

The travel insurance marketplace InsureMyTrip.com has also created a map (linked here)—but this one only tracks entry regulations. So it can't help you find out which types of facilities might not be open, what the masking requirements are, or other issues. It’s not interactive, either. But at least it’s the most accurate resource (right now), even if it is a bit clunky.

InsureMyTrip’s page has two color-coded maps. The first marks the states one can enter with no restrictions, which states are accepting visitors from most places, and which states have quarantine requirements. Idaho and Illinois are colored black to indicate that some cities within those states have their own entry regulations.

On InsureMyTrip's second map, you can find out which states have mandatory health screenings at the airports (Hawaii, Alaska, Montana); which require documentation of visitors (Alaska, Hawaii, New York, Connecticut, Massachusetts); and which allow a Covid-19 test in lieu of quarantine (Alaska, Vermont, Maine, and, soon, Hawaii).

Each state on that site includes dense text on requirements, and below that, links to governmental sites.

Bottom line: These sites do have utility, especially the one created by InsureMyTrip. But users of the United site will need to click on the links provided to double-check the information unless the site gets more vigilant about updating changes.

It's shocking how difficult it can be to obtain current directives for travel within the United States, but these maps can help you piece together the current situation wherever you're going.