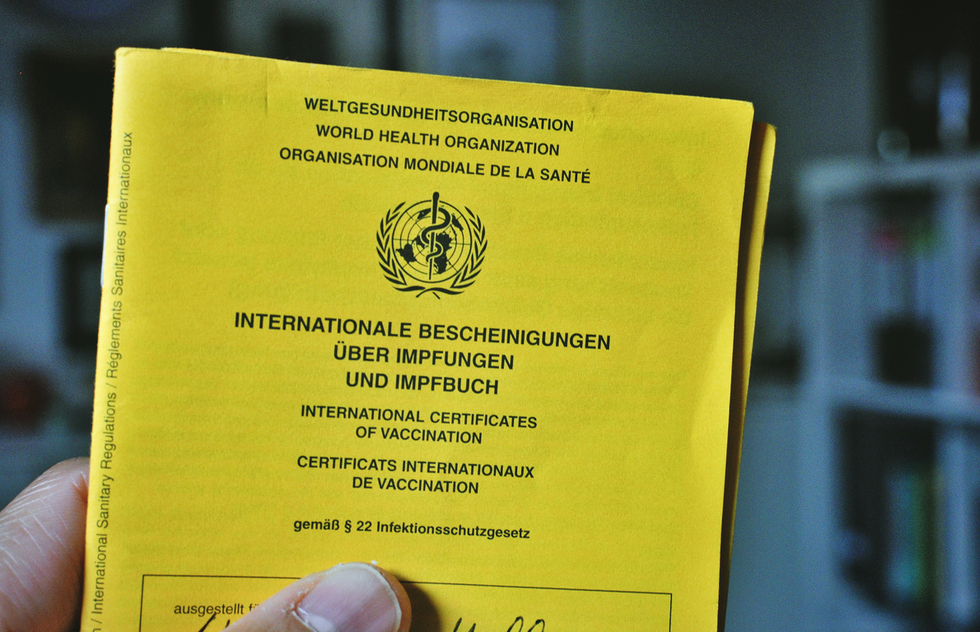 Vaccine Passports Are Nothing New. Travelers Already Use Them.

In an interview on December 3, Dr. Anthony Fauci, director of the U.S. National Institute of Allergy and Infectious Diseases (NIAID), said that using vaccine passports to facilitate international travel after the Covid-19 vaccine rollout is "at least interesting enough to consider."

For Fauci and other longtime experts in infectious disease, the idea isn't controversial—because vaccination passports are already in common use.

Click through Frommer's thousands of pages of travel advice, and you'll see vaccine proof by "certificates" mentioned over and over.

Morocco: "The only inoculation requirement is a yellow fever vaccination certificate for travelers 2 years of age and over entering Morocco within 6 days of leaving an infected country."

Costa Rica: "No shots or inoculations are required to enter Costa Rica. The exception to this is for those who have recently been traveling in a country or region known to have yellow fever. In this case, proof of a yellow fever vaccination is required."

Thailand: "Yellow fever certificates are required for those coming from 42 African and South American countries."

There are dozens more examples, but you get the picture: Vaccination certificates are already a thing.

In 1959, more than 20 years after a vaccine for deadly yellow fever was developed, the nations of the world agreed to implement an official paper form, about the size of a normal passport, that lists a traveler's pertinent vaccinations. Showing the form tells border control agents that you're not bringing infection into their countries because you have evidence that you got your shots.

Although it's officially called the Certificate of Vaccination or Prophylaxis (ICVP), you're more likely to hear it called a Carte Jaune, or a Yellow Card, and visitors are required to present the document at border crossings around the world, particularly if they have been in places where yellow fever is endemic. (The Yellow Card, which was specifically designed to satisfy border control agents, is different from the vaccine validation apps that the airline industry and some countries are developing.)

If you're not a regular traveler to South America, Africa, India, or Asia, you might not have used a vaccine certificate before, but millions of people (including me) have relied upon them. The Centers for Disease Control will even point travelers to health providers who can sign and stamp their Cartes Jaune ahead of vacations.

Even though we have used vaccine certificates since the Eisenhower Administration, no one has been protesting them as a violation of liberty—mostly because they function to preserve liberty.

Just as a driver's license from your home country tells people in a destination that you have gone through a process to learn how to drive responsibly, Yellow Cards dispel doubts about you carrying infection. Both licenses and Yellow Cards enable you to maintain your travel plans even though you're entering a country that did not oversee your preparations—otherwise you'd have to retake driving tests and get duplicate shots every time you crossed a border.

By the way, you may also hear about "immunity passports." Technically, immunity is a different thing, and it involves having your blood tested for antibodies that prove you've had a disease and then recovered. Vaccines work differently and are applied far more widely across populations. Still, you'll hear people (wrongly) use "immunity passport" when they almost always mean one for vaccination—and that's exactly what the Carte Jaune certifies.

So if you have any would-be Patrick Henrys in your life who protest that vaccination passports are a violation of their liberties, ask them why they haven't been complaining about them for all these years. Some of the most liberated people in the world have used them every day since the 1950s to extend their adventures to new frontiers.