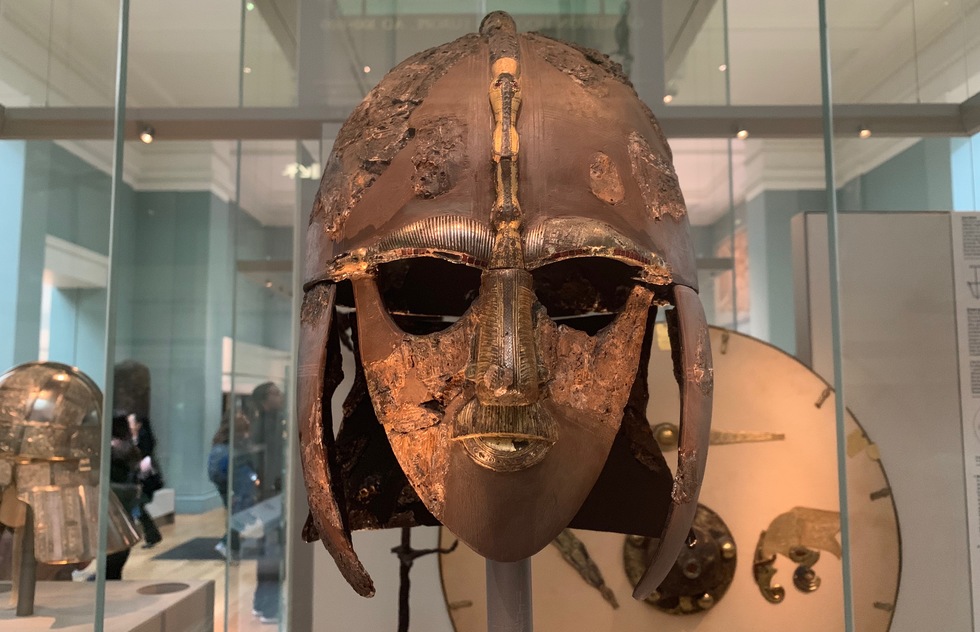 Watched "The Dig" on Netflix? Here's Where to See What They Found

Alert: This post contains one minor spoiler about where the artifacts featured in The Dig were eventually put on display.

The Dig, the latest breakout hit movie on Netflix, retells the 1939 unearthing of the Sutton Hoo burial.

That name may mean nothing to you, but nearly every English schoolchild is taught all about the fabulousness of Sutton Hoo. England is a relatively small country packed with history, so everyday folk routinely discover Roman ruins, medieval graves, or Tudor foundations hiding under innocent-looking lumps in their back gardens.

But even for a place where sensational archaeological finds are common, Sutton Hoo, which was pulled from a Suffolk field on the eve of World War Two, stands out as remarkable. The discovery was like an English version of finding King Tut's tomb.

In the film's fictionalized account, adapted from John Preston's 2007 novel, the cast, which includes Ralph Fiennes, Carey Mulligan, and Lily James, play characters undergoing personal transformation as they excavate a mound that turns out to contain the remains of a 90-foot Anglo-Saxon ship.

The vessel was buried in an elaborate funeral for an unknown important figure in the 6th or 7th century. During the movie, you don't get to spend much time inspecting the astounding trove of golden Anglo-Saxon treasures that were entombed with the body.

That's all right. You can fix that on your next vacation. The Sutton Hoo discoveries have pride of place in Room 41 on the upper floor of the British Museum in London.

It might be a little tricky to dash out to see these objects at the moment, but that's all right, too, because the British Museum has a generous digital outreach program. If you can't get to the Sutton Hoo treasure, the best of it can come to you.

Happily, Room 41 has been captured on Google Street View, so you can peruse the prime acquisitions in 360 degrees from wherever you are right now. And yes, Basil Brown, played by Fiennes in The Dig, is credited by name on the signs.

Click this link and navigate to the case in the center of the room, which contains the helmet pictured in the photo at the top of this page. To the left of the helmet, there's a modern reconstruction of what it looked like in its original glory.

For more on the artifact, curator and archaeologist Sue Brunning explains the helmet's features in the video below. She also reveals how researchers figured out how to reassemble the pieces.

In another clip, Brunning analyzes a garnet-encrusted sword that was found lying next to the Sutton Hoo body. Using only tiny clues from this little item, she was able to figure out a lot about the person who owned it.

When you visit the British Museum in person, "Hands On" events with other artifacts are scheduled throughout the facility on most days when it's open (check the schedule at the front desk).

For those who can't be in London, the British Museum catalogs most of its collection online in satisfying detail. Thousands of minor Sutton Hoo items, from corroded iron to spoons to fragments of animal hides and fabric, are catalogued under "Related Objects" at this link.

So much of what was uncovered at Sutton Hoo reshaped modern assumptions about the sophistication and capabilities of Anglo-Saxon people. The precious belt buckle pictured below was made with more than 400 grams of gold, and its zoomorphic interlacing design and hinge (you can zoom in at this link) reveal a depth of complexity that opened new doors for anthropologists. 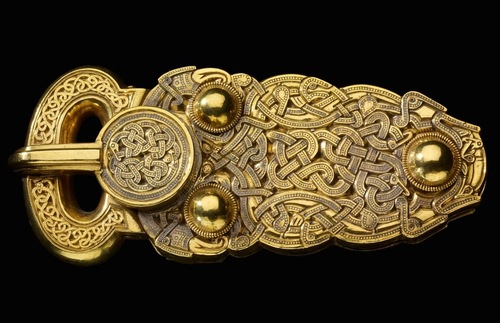 Although the principal items are on display in London, the actual Sutton Hoo excavation site is now managed as a historic park by the National Trust, which cares for Britain's most priceless places. You'll find the grounds in Woodbridge, Suffolk, north of London—trains to the nearest station, Melton, take about two hours from London's Liverpool Street Station with one change at Ipswich.

At the dig site, near the home once owned by Edith Pretty—who donated the finds to the nation—you'll see more golden goodies pulled from the mounds on the property, plus a life-size representation of the burial ship and lots of walking trails for exploring the bucolic landscape. The land is so quiet and empty, you'd never guess that such riches could be found underfoot.

Sutton Hoo's glittering hoard also spent time in the London Tube. During the worst of the war, the artifacts (along with other irreplaceable items in the British Museum's collection) were hidden in tunnels between the Aldwych and Holborn stops on the London Underground.

Aldwych is no longer used by passengers (or by Anglo-Saxon funerary fortunes), but it frequently serves as a set for movies and TV shows, including Sherlock, Darkest Hour, V for Vendetta, and others. Transport for London, which runs the Tube system, sometimes schedules walking tours of the old stop.

Plan your trip with our award-winning guide to London, available in paperback or as a downloadable e-book.