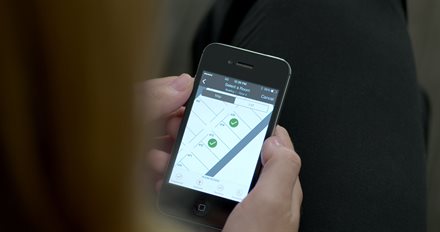 Okay, travel nerds, here's what I predict will happen soon.

Bustling new websites will be devoted to which specific hotel rooms are the best ones to book. Travelers will debate, sometimes bitterly, the finer points of palm tree placement outside a resort's windows. Hotel staff will learn how to handle guests who won't rest until they're reassigned from 431 to 432. Rooms with numbers ending in 13 will often be available because they're perceived as unlucky, and room 888 will rarely be available because it's a lucky number in Chinese culture.

Hilton has announced that it's about to take the wraps off a new digital system that enables guests to view hotel floor plans and select which room they want at more than 4,000 of its properties in more than 80 countries around the world. That's more than 650,000 rooms that travel nerds will probably learn to appraise individually for their value.

The new system will also enable guests to make special requests without interacting with staff, it will enable check-in from the back seat of a taxi, and it will facilitate check-out without having to go to the front desk. Even after the stay is long over, you'll be able to access your itemized receipt on your smartphone.

I asked Geraldine Calpin, the Senior Vice President and Global Head of Digital at Hilton Worldwide, how it will work. Calpin likened the technology to the way we now choose seats on an airline—you go to a map and choose the one you want from the available options.

Guests will be allowed to choose a specific room starting at 6am the day before arrival. As the feature gets off the ground, maps will consist of rough plans for each floor of the hotel. If a hotel has 10 levels, there will be 10 maps, and if there's an outdoor feature such as a terrace attached to one of the floors, it will be noted on the floor it's attached to but not on the map for other floors even though the room may overlook it. The maps also won't have compass points to give you a sense of which way you're facing—in the first version of the feature, you'll have to find that out through other means before deciding which room to pick.

So for now, whether there's a lusciously landscaped pool or a brick wall 50 yards away, you won't necessarily know that from the map. Instead, you'll have to rely on the category name—which generally has telling code words along the lines of "City View" or "Garden View"—to give you a sense of what you'll be seeing out the window. This could change in time as Hilton tweaks the system based on customer feedback.

Of course, the variables involved with renting hotel rooms are much more complex than that of an airline because on an airline, no one is allowed to stay in their seat for additional flights. What happens if the room you choose unexpectedly becomes unavailable because the prior guest extends their stay or something breaks in it?

"If you had reserved Room 222, we will probably give you 322, or a similar room to what you've booked," says Calpin. "We'll give you the most similar one that we can."

The feature costs nothing to use. Instead, Hilton will benefit from the collection of your personal information. To use the app, guests must sign up with the hotel company's membership program, HHonors, which is free to join and retains information such as credit card numbers and room preferences. The app's rollout will mean a rush of new applicants. "We will be moving to make Hilton HHonors a much easier and quicker thing to join," says Calpin.

In time, the smartphone app will also enable you to open your room door with your phone, meaning a guest can check in from afar and get into their room without ever seeing a staff member, but Calpin says Hilton is not abandoning magnetic stripe key cards entirely. "Not everyone has a smartphone," Calpin acknowledges.

There are no plans to offer free Wi-Fi in all Hilton hotels in order to implement these new smartphone features, says Calpin, partly because room selection will happen well before guests arrive at the hotel, and partly because the features are expected to work via standard cell phone coverage.

In addition to increased loyalty sign-ups, Hilton also expects to take some clerical burdens away front desk staff. "Once adoption is high, the front desk can move from processing transactions to being much more about providing added value such as advice about what's happening the area," says Calpin.
More than anything, that's a big incentive for more hotels to create similar systems—the savings in manpower and paperwork reduction could be dramatic. That hotels simultaneously have a justification to collect reams of granular information about guest behavior will make this sort of technology irresistible to the properties that can afford to build it. Walt Disney World has already done it with its MagicBands. The other major travel brands will follow suit.
Hilton's system, which was developed for iOS and Android, will go into place by summer's end in the U.S. at Waldorf Astoria Hotels & Resorts, Conrad Hotels & Resorts, Hilton Hotels & Resorts, Hilton Garden Inn, Homewood Suites and Home2 Suites. It will also be at DoubleTree by Hilton and Embassy Suites Hotels properties in the United States by this fall.