Last Monday, my coworkers at the schools in Spain where I was employed as a teaching assistant told me not to worry about the coronavirus. The next day, I was told I wouldn't be working for at least two weeks.

Since September, I had been living in La Rioja, the northern region best-known for its red wine. I was helping with English classes at three different schools in the small town of Nájera—two were primary schools, and the other was an instituto, which is kind of like a middle school/high school hybrid.

This was all in addition to my Frommer’s internship, which I’m carrying out remotely.

La Rioja isn’t among the Spanish regions hardest-hit by the virus—those areas are Madrid and Catalonia, with more than 7,000 and 3,000 cases, respectively, of Spain’s nearly 20,000 confirmed COVID-19 cases (as of this writing).

But by the time the schools in La Rioja shut down last week, the region had reached over 100 diagnoses (currently, the number is nearing 500).

Still, many of my coworkers considered the closures an overreaction.

It seemed to me that the country was headed toward an outcome similar to what was happening in Italy, where infection rates had soared and the entire country was eventually put on lockdown.

I weighed my options. If the same thing happened in Spain—and, sure enough, it later did—would I rather get stuck there or try to return to the United States?

I was already set to go back home to North Carolina for a spring break in the middle of April. And KLM, the Dutch airline I had booked a flight with, had updated its policy to allow free flight changes as long as I traveled before May 31.

Given all the uncertainty, I decided to take the airline up on the offer. I was going home.

Not that making the flight change was easy by any means. I couldn’t get ahold of a KLM representative for a full day—not by phone, Facebook, WhatsApp, or angry Twitter post.

Growing desperate, I decided to take the four-hour bus ride to Madrid and visit KLM’s office at the airport in person. When I got there on Wednesday morning of last week, I was told that a flight change wasn’t possible, even after I showed an employee KLM’s new policy on my phone. She wasn’t convinced.

So I got back on the phone and finally got through to the airline and a rep informed that I could be on a flight home that day—and I wouldn’t have to pay extra to make the change. The flight would go from Madrid to the U.S., with a layover in Amsterdam, and the first plane would take off at 11am.

From there, departure was relatively routine, except for the elevated anxiety levels all around. 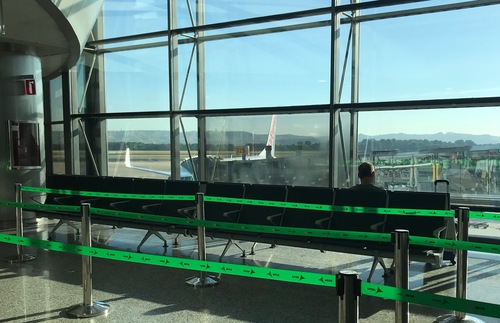 Madrid’s airport seemed largely empty, yet my flight to Amsterdam was full—and everyone was on guard. My seatmates wiped down their areas diligently, and about half of the passengers were wearing masks.

Every cough—and there were quite a few of them—earned anxious stares from nearby passengers.

In Amsterdam, the customs agent simply asked if I had been to China, Iran, or Italy recently before letting me breeze through to my next flight.

That one was operated by Delta Air Lines and was headed to JFK Airport in New York City. The plane wasn’t completely vacant, but I did get bumped up to a premium economy seat, where I had a whole row to myself.

I was the only passenger wearing a mask when I boarded, but I took it off after a few worried looks came my way.

At JFK, the customs agent didn’t seem especially bothered. As in Amsterdam, all I got was a nonchalant “Have you been to China or Iran recently?” From there I was free to set off on the next leg of the journey—flight number three.

My original plan was to fly from JFK to Washington, D.C., then go from D.C. to North Carolina on a bus. But that no longer seemed like a good idea amid the virus outbreak.

So I tried my luck with Delta and asked if I could change my final destination from D.C. to North Carolina. Evidently, there’s a limit to the flexibility of the new change policies. The ticketing agent told me that I’d have to buy another fare: $342 for Charlotte or $38.40 for Raleigh.

That meant I was headed to Raleigh. When we landed in North Carolina, there was a text message waiting for me. It was from a friend letting me know that while I was in transit, Pres. Trump announced that the United States was suspending all incoming travel from Europe.

I would later find out this wasn’t completely true, but it seemed like I made it home just in time nevertheless.

I was still tense, though. All the distance I had covered that day—from northern Spain to Madrid to Amsterdam to New York to North Carolina—only underscored how fast and how far we can travel nowadays. And the same goes for the things we carry.