A Shrine to Wine Opens in France (Where Else?) 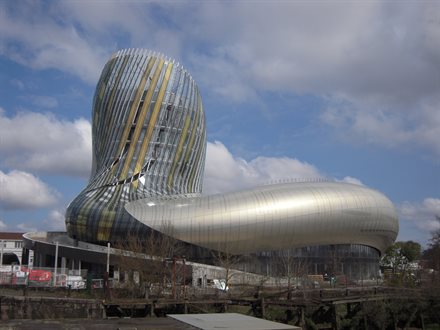 Dubbed the "Guggenheim of wine," France's brand-new La Cité du Vin, which opened last week in Bordeaux, is clearly intended as an august monument to all things wine in a country that has been producing the stuff for centuries. At the museum's dedication, French President Francois Hollande declared it an "emblem of excellence" and a "symbol of coming together."

Strong words for a building that looks, as some critics have pointed out, like a snail crawling along the banks of the Garonne River.

Actually, what the 10-story, $91-million structure is supposed to resemble is a giant glass of swirling, golden liquid—an apt reflection of the mix of grandiosity and gimmickry you'll find inside.

The museum's ambitious side is conveyed via its laudaby international scope. Though the region surrounding Bordeaux is one of the world’s oldest and most celebrated wine-producing areas, La Cité du Vin does more than pay tribute to its immediate surroundings. Instead, 20 high-tech interactive exhibits let you explore the history, culture, and production of wine from across the globe. A simulator takes you on a nautical journey with wine merchants, digital displays show off aerial footage of vineyards everywhere from South Africa to North America, and experts from all over offer classes, tastings, and other events throughout the facility.

On the other hand, there's a glut of multimedia games and features that have led many to refer to the place, not unjustly, as a wine theme park. Videos, images, and sniffing stations aim to pique the senses, while vino’s cultural impact is commemorated in boozy peep shows and a "chair of despair," where you don a headset and listen to tales of bad hangovers.

Of course, you could argue that this mix of serious and silly is entirely appropriate when it comes to wine—a storied, sophisticated, and time-tested product that, after all, gets you sloshed.

Fortunately, there are several venues onsite where you can sniff and swirl for yourself. Bars in the building include the ground-floor Latitude20, which boasts a wine cellar with a whopping 14,000 bottles from nearly 80 different countries, and, on the top floor, Belvedere, where you can sip wines by the glass while enjoying 360-degree views of the surrounding countryside.

That’s scenery worth a toast or two.