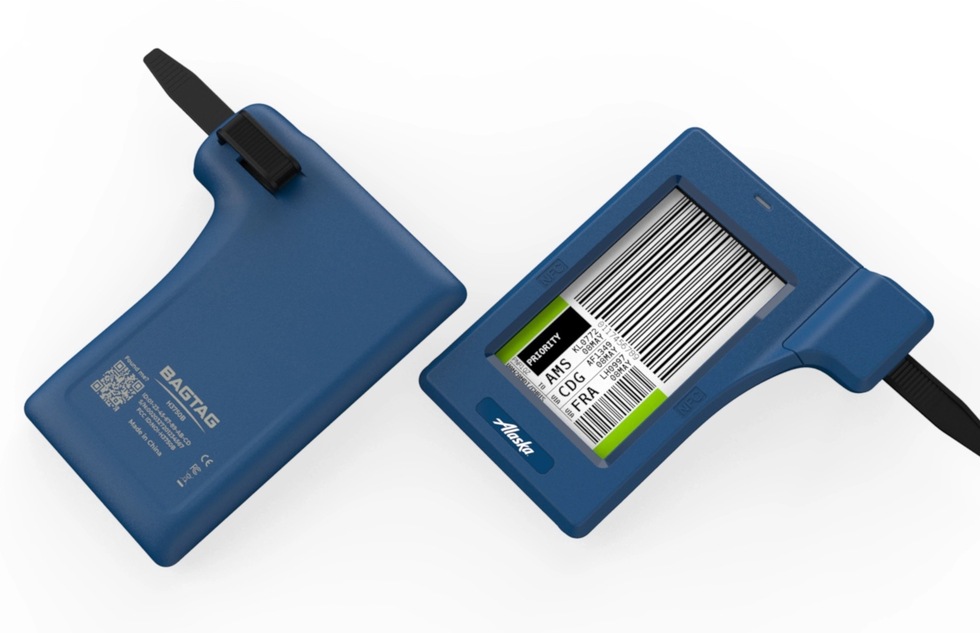 Alaska Airlines has started rolling out a new electronic bag tag that eliminates the need for printed destination labels for checked luggage.

The new devices, which were announced earlier this year, are now available for about 2,500 of the airline's most loyal travelers. The tags will be available for purchase by any passenger starting in 2023.

Before their trips, passengers can load the reusable electronic devices with flight information by opening the Alaska Airlines app on a Bluetooth-enabled smartphone and touching the phone to the tag when prompted. The tags then display the necessary information and bar codes.

The new system, which functions on flights operated by Alaska Airlines, Horizon Air, and SkyWest Airlines, theoretically makes it possible for passengers to go straight to the bag-drop desk during check-in and skip printing long paper destination tags at the airport.

The introduction of BAGTAG, which is designed by a Dutch company, makes Alaska Airlines the first U.S. carrier to use a system of this sort, although the manufacturer says the same units can also be used on some international carriers including Lufthansa, KLM, Swiss, Austrian, and China Southern.

The devices do not require batteries or charging, but they must be affixed to the middle of a bag's top handle for easy reading. The tags can be transferred to other users, too, although the pin-and-release locking system might make removing the thing a chore. In its FAQ on the system, Alaska Airlines explains, "the device itself is designed to stay put during the rigors of travel and may take some effort to detach ... particularly the first few times."

Watch the short airline-produced video about how the new doohickeys work:

BAGTAG will only be available by purchase. The airline has not yet announced the final retail price, but the maker's website charges around $80.

There are some early limitations to the use of BAGTAG on Alaska Airlines. Right now, the system can only be applied to reservations for a single traveler with a single checked bag, and the tag can only be activated when there's no payment required for the checked bag, such as for passengers with elite-level miles that grant fee baggage allowances.

But those restrictions will likely be temporary: Alaska says it's working on expanding the technology's application to include groups and paid checked bags.

To prepare for the rollout, Alaska Airlines has stopped letting passengers print their own bag tags from home.

The purchase price for the new doodads might be a little steep for something that only saves you a few minutes for each check-in process; unless BAGTAG users are given their own area at the airport, they'll usually have to wait in line for the bag drop anyway. And if the unit can be transferred so easily to other users, we wonder what would prevent the devices from being stolen and resold.

The tags also don't track the location of luggage, which would make them much more appealing from the flyer's point of view. Right now, people are using controversial trackers like the Apple AirTag to keep tabs on checked bags.

As it stands, BAGTAG seems to help airline understaffing more than it meets passengers' needs. But who knows—maybe once the system is on its feet at Alaska Airlines, its efficiency, features, and price can be improved.