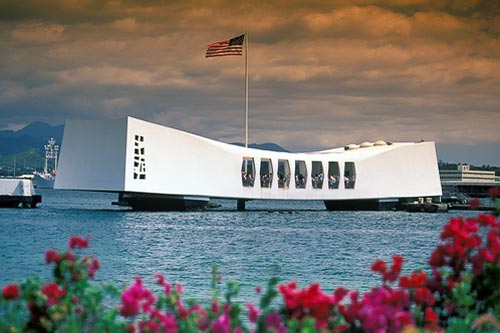 Bad News for the Arizona Memorial in Pearl Harbor, Hawaii

Pearl Harbor's world-famous memorial (pictured above) that straddles the submerged wreck of the USS Arizona has been closed indefinitely.

The trouble began May 6, when cracks were discovered in its structure at a point where it meets the loading ramp from its boat dock. Repairs were carried out, but hours after the platform reopened on May 23, the fissures were seen again, which indicated a more serious foundational problem with the 56-year-old structure. The damage is not reported to be associated with the sunken ship, which serves as a last resting place for many young men.

Hawaii is already reeling from the negative tourism effects of an ongoing volcanic eruption (read about its tourism impact here). Now Honolulu, which has not been physically affected by the volcano, has lost one of its most important attractions for the foreseeable future.

There is still lots to do at the site, officially called the World War II Valor in the Pacific National Memorial, including the battleship Missouri, on which the Japanese surrendered, plus a museum, film, and waterside placards. But the Arizona memorial is undoubtedly what visitors think of when they think of paying respects at Pearl Harbor.

Boat rides to the Arizona memorial are always halted in case of high winds, but now, they will only make a tour of the harbor and not stop at the structure.