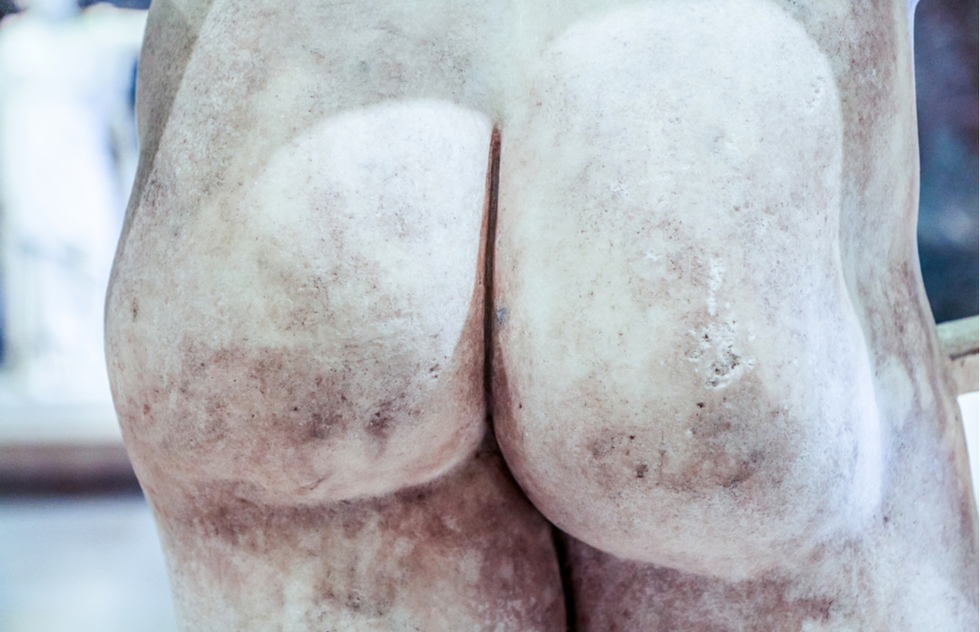 Bums Rush: Which Museum Has the Best Butt?

By our count, there has been precisely one upside to museums having to close their doors due to the worldwide health crisis: The forced downtime freed up bored staffers to participate in Yorkshire Museum's weekly #CuratorBattle on Twitter.

In the spring, the small archaeological museum in York, England, began posting social media challenges each Friday, inviting other institutions across the globe to share images of items in their collections according to a given theme.

The most popular #CuratorBattle, posted in April, was a call for creepy objects that prompted a feast of nightmare fodder, including preserved body parts, porcelain dolls that look like they're plotting your murder, and a taxidermied mermaid that could ruin Disney's Ariel for you forever.

Yorkshire Museum ended the weekly series on July 24, with a promise to return periodically with special battles in the future.

But before bowing out, one of the final installments was a cheeky delight: Museums were challenged to reveal the finest backsides in their collections using the hashtag #BestMuseumBum.

Curators obliged with posts showing off the marble glutes of Greek gods, the diapered derrieres of sumo wrestlers in watercolors, the capacious seats in suits of armor made for Henry VIII, and the skinless behinds of old anatomical models, among many other culturally, historically, and scientifically significant cabooses.

We've posted a selection below. Given the subject matter, the appropriate thing would be to start from the bottom.

How about these bums of SUMO wrestlers in our collections? These bums were painted by Hokusai!! #CURATORBATTLE #BestMuseumBum #??????? pic.twitter.com/DH4rAyQ8Xs


Throughout her life, Meila Kairi?kštyt?-Balkus was interested in the topic of femininity, which is reflected in her work "Elena I". Her sculptures are naturalistic, seeking to convey real rather than idealized forms of a woman. pic.twitter.com/QJfmB9gg9z — M. K. ?iurlionis National Museum of Art (@CiurlionisMus) July 1, 2020

Another #CURATORBATTLE Etty for #BestMuseumBum today, this time 'Man Lying Face Down'.

We like to think he's just been to the freezer and realised he ate the last Cornetto last night. And that he can't get the drawer back in and that the whole freezer needs defrosting ?? pic.twitter.com/7pJ9gfTVdN

In honour of #NIW2020 we submit the Bumblebee (Bombus sp.) for this weeks #CURATORBATTLE #bestmuseumbum though floofiest (technical term) bum must surely go to the Bee Hawkmoth (Hemaris tityus) #EntoAtHome #insects #minibeasts pic.twitter.com/zRNj2NBkNz

You can track Henry VIII's burgeoning bottom through our collection of his combat armours. The Tudor tubster went from a modest 32in waist in 1520 to a whopping 51in booty by 1540.

A 60% increase in trunk junk ???? pic.twitter.com/vpx9mQyCpA

For today’s #CURATORBATTLE (or perhaps #CURATORREBUTTAL?) theme of #BestMuseumBum, we present Hercules knocking it out of the park...

A work by the goldsmith Francesco Pomarano, this boxwood statuette was already a celebrated piece in the #sixteenthcentury.#WallaceFromHome pic.twitter.com/3LoD6JkIOa


To discover in the Galerie du temps...

We raise your athlete and instead give you the bum of a drunken fish. Yes you heard me.

Made by Pamela Mei Yee Leung, it was part of a body of work which married animals and humans together to create mythological creatures with personalities. #BestMuseumBum #CuratorBattle pic.twitter.com/qUAa3NgGcG

Oh how we're enjoying the competition for #BestMuseumBum!

And we give you this juicy, muscly ???? - with a nice close up for your delectation! pic.twitter.com/NiJFnZq98i