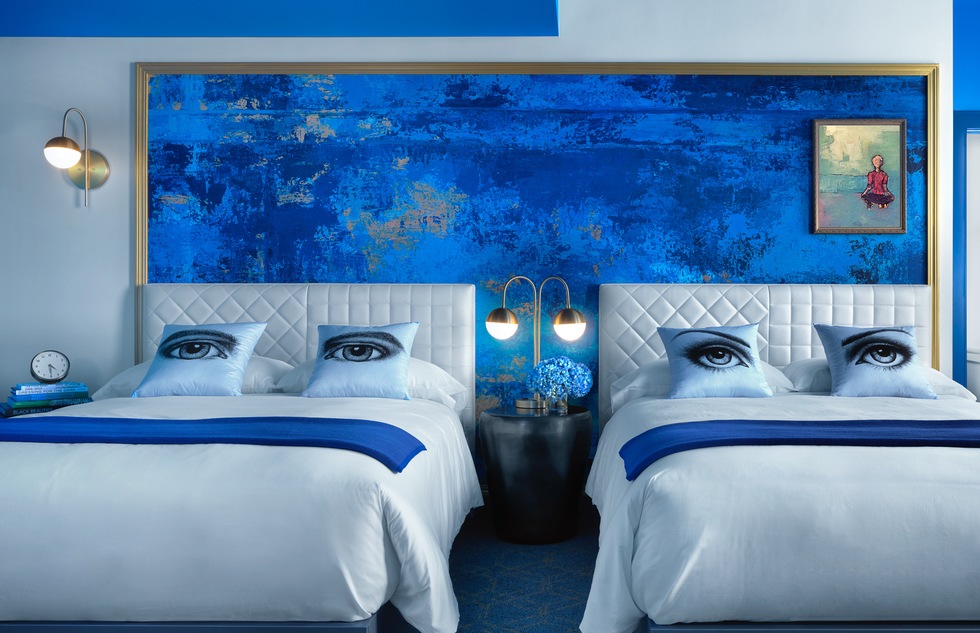 Colorful New St. Louis Hotel Wants to Give You the Blues (or Reds or Yellows)

Those lyrics take on new meaning at the Angad Arts Hotel, which opens this week amid the many galleries and performance venues of the Grand Center Arts District in St. Louis.

Guests who book one of the hotel's 146 rooms or 38 suites don't just pick bed sizes but also a color to match one of four moods—red for passion, yellow for happiness, green for rejuvenation, and blue for tranquility (not, contra Handy, sadness brought on by a man with a "heart like a rock cast in the sea").

Everything in the guest room will adhere to the color scheme, from the paint on the walls to the furniture to the rubber duckie in the bathroom.

More shades of the rainbow are allowed in public spaces, but those areas are likewise focused on contemporary art and design. Works by local artists are exhibited throughout the building, including video displays in the elevators. There's a room with wall-mounted musical instruments that anybody can take down and strum or blow through. And installations show off a precarious-looking 14-foot-tall stack of luggage and, in the 12th-floor lobby, digital projections on the wraparound surface of a huge lighting fixture called the Chameleon Lamp. 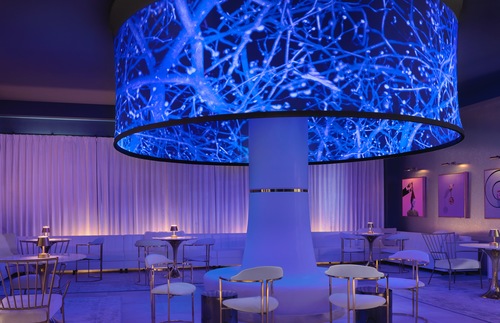 In keeping with its artsy location, the hotel plans to host pop-up performances and other creative happenings.

“A local dance troupe might create a Dirty Dancing performance, unannounced,” a press release quotes former Studio 54 manager David Miskit, now the hotel's executive managing director. “Or the lobby lights might dim, and a student from the Grand Central Arts Academy across the street might walk in and sing an aria."

A performance component seems apt, given that the building started out as the Missouri Theater, a movie palace built in 1927. Between film screenings, a dance troupe called the Missouri Rockets would entertain audiences—until, that is, the group relocated to New York and were renamed the Radio City Rockettes.

Listed on the National Register of Historic Places, the building was renovated—to the tune of $65 million—by co-developers the Lawrence Group and the U.K.'s Swraj Paul. The hotel was named after the latter's son Angad, who died in 2015.

Room reservations are being accepted as of November 1. Lawrence Group CEO Steve Smith told the Chicago Tribune that the average nightly rate "will settle in around the low $200s."

But the introductory "Red Hot Rate" offered exclusively through the hotel's website starts at $95 and is valid through March 31.