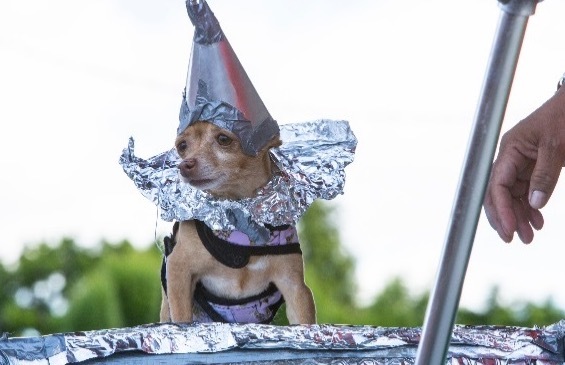 Coming in May: UFO Fests in Oregon and New York State

But judging from the many UFO festivals held across the country each year, there are evidently still plenty of those who believe the truth is out there.

Among this spring's crop of events dedicated to alien abductions, government cover-ups, and other extra-terrestrial topics, you've just missed the Out of This World UFO Conference and Festival in Edinburg, Texas and the Ozark Mountain UFO Conference in Eureka Springs, Arkansas. Both were held last weekend.

But fear not, earthling: Another pair of alien-centric fests are scheduled for May. They'll take place on the same weekend on opposite ends of the country, so you'll have to pick one or the other unless, of course, you have access to a high-speed spaceship.

On Saturday, May 19, the Pine Bush UFO Fair offers a slew of family-friendly activities for Martian-seekers of all ages in a small town in New York State. An unusual number of weird stuff has reportedly been spotted in the skies over Pine Bush over the years, from flashing lights to flying saucers.

During the fair on Main Street, visitors can watch a parade, listen to talks led by ufologists, attend live music performances, check out food and craft vendors, and witness the crowning of Miss Galaxy.

Pine Bush is only about a two-hour drive north of New York City, putting it within easy day-trip distance for those seeking a fun break from Manhattan madness.

On the other side of the country, meanwhile, the McMenamins UFO Festival is scheduled for May 17-19 in McMinnville, Oregon, located in the winery-rich Willamette Valley south of Portland.

Based at McMinnville's century-old Hotel Oregon, the festival, now in its 19th year, pays tribute to the town's claim to fame in UFO lore: In 1950 it was where a farmer snapped (or staged?) one of the most famous flying saucer photos ever.

As in Pine Bush, the McMinnville event balances serious lectures delivered by true believers with fun stuff, including wine tastings, sci-fi movie screenings, a parade, costume contests (for humans and pets alike, as pictured above), and much more. Visit the festival's website for the full schedule.