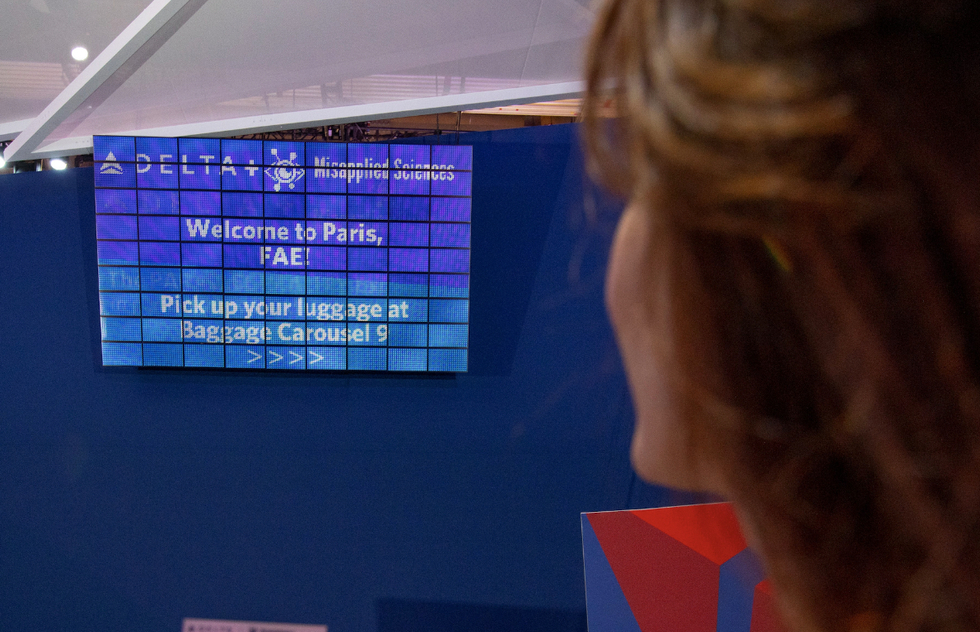 What's the word for when a thing is kind of cool yet kind of creepy at the same time?

A mind-bending digital info screen, developed in partnership with Misapplied Sciences and dubbed Parallel Reality, will debut in beta form on June 29 near the Delta Sky Club in Concourse A of the McNamara Terminal.

The Parallel Reality display conveys the same sort of stuff you find on traditional airport screens—about departure times, gate numbers, baggage carousel locations, and so on—but you don't have to scan lists of data because the screen semi-magically shows you only what you're looking for, while up to 100 other people are simultaneously looking at the same screen semi-magically showing them what they're looking for.

If the system is difficult to imagine, watch the below clip showing a demonstration of the technology at CES (the Consumer Electronics Show), where Delta first exhibited the screens in 2020.

Just kidding. That's a scene from Minority Report. Delta isn't using its technology to pester you with personalized ads. At least, not yet. (How long can it be, though, before the airline starts programming in some pitches for credit cards?)

Here's a video walk-through of Delta's actual CES preview of Parallel Reality. The clip was posted to the aviation-geek channel Airboyd in January 2020.

How does this thing work? On its website, Delta's tech partner, Misapplied Sciences, credits pixels with advanced capabilities as well as something having to do with "precision spatial calibration," "high performance parallel computation," and other complicated-sounding strings of syllables.

For those of us whose high-tech know-how stops at attaching emoji to text messages, it's probably enough to understand that if you have opted in to the Parallel Reality program, scanning your boarding pass is what activates the magic airport screen.

In Airboyd's YouTube video, we see that once a QR code is scanned, mounted cameras and sensors begin tracking the narrator's position so that the info screens can supply customized information to each person in the space.

To initiate the experience in Detroit, ticketed Delta passengers who have passed through security may step up to the Parallel Reality display and scan their boarding passes to try the thing out.

Those enrolled in the digital identity program via the Fly Delta App can activate facial recognition at the exhibit kiosk, too.

If you're concerned about privacy, Delta's announcement stresses that the Parallel Reality experience "will always be opt-in, and customer information is not stored."

Testing the technology as part of an ongoing effort to modernize air travel, Delta will evaluate the system's "efficacy in the real world before potentially expanding to other airports."