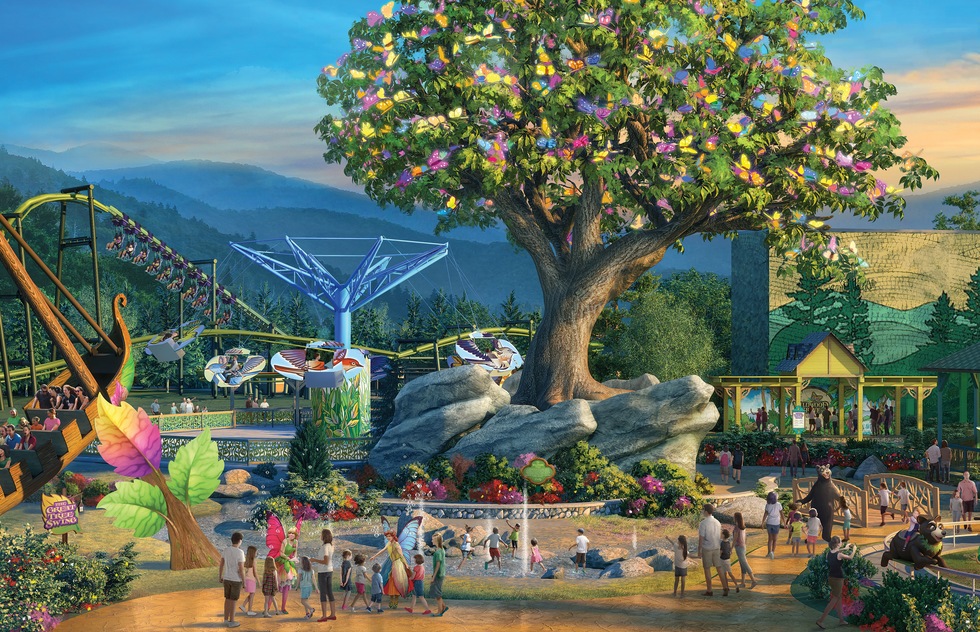 Dollywood's New Expansion, Open in May, Is Its Largest Ever

Dolly Parton's Dollywood amusement park—located in the foothills of Tennessee's Great Smoky Mountains, where the country icon grew up—is opening its largest expansion ever this spring.

The 6-acre, $37-million Wildwood Grove is a new themed land that will have 11 guest experiences, including 6 rides.

Parton worked with the park's creative team to come up with a distinctive quality for the area, which is meant to recall a mountain grove.

Dollywood director of media Pete Owens described the theme to USA Today: "Some of it is Smoky Mountain lore. Some of it is related to things Dolly has said through the years about making friends with butterflies and frogs as a child.”


Wildwood Grove will center on a 55-foot-tall tree decked out with twinkling lights, colorful butterfly replicas, and music effects. There will also be costumed critters to meet.

Younger kids are the target demographic. Themed kiddie rides include a canter through the woods on the back of a black bear and a twirl through the treetops while seated in a giant acorn.

For more adventurous guests, Wildwood Grove will also have a new roller coaster. The Dragonflier is a suspended coaster, meaning cars hang from a rail and riders' legs dangle as they zip around the landscape.
advertisement


According to the Knoxville News Sentinel, the Dollywood expansion is expected to debut in May.

It seems like a promising sign that the area has made a strong recovery from the wildfires that caused massive damage to nearby Gatlinburg and Great Smoky Mountains National Park in 2016.

More than two years after the devastation, tourism and government officials have reported that new safety measures are in place, building permit requests are up, and the economy is booming, thanks in large part to record-breaking visitation numbers at the perennially popular national park.
advertisement
Family & Kids
News
Theme Park