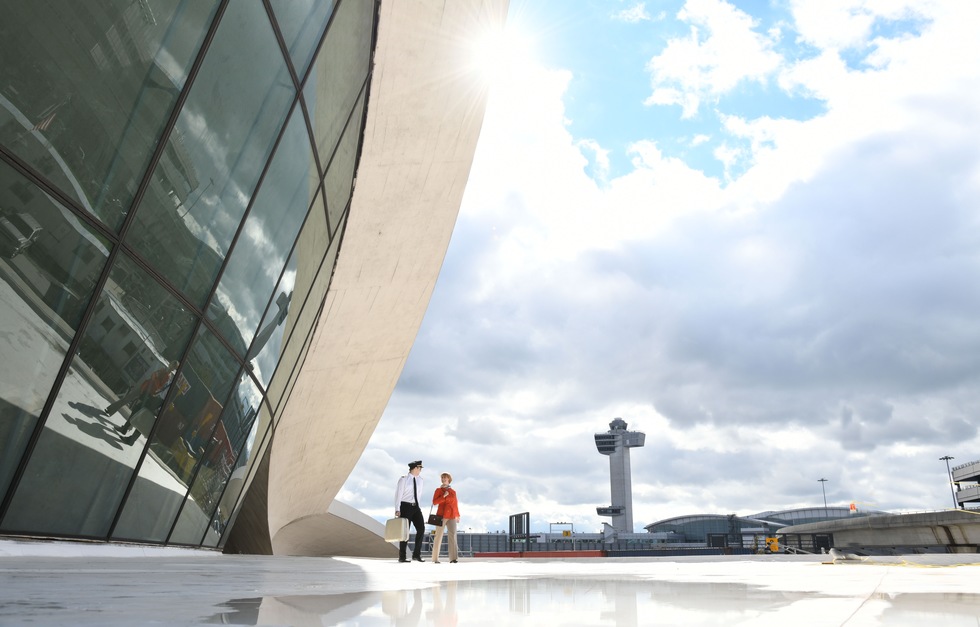 Booking a room at the TWA Hotel at JFK Airport is off to a lovely start. On Valentine’s Day, Thursday, Feb. 14, at noon, reservations open for stays beginning May 15, 2019.
The grand opening is an illustrious second act for what was once known as the TWA Flight Center, a major hub during the Jet Age era. Designed by architect Eero Saarinen and opened in 1962, the distinctive terminal, considered by many architects to be the pinnacle of design in travel infrastructure, was outgrown and closed in 2001. In 2005, it was placed on the U.S. National Register of Historic Places.
The building sat abandoned for more than a decade before plans were announced for the TWA Hotel, which has added 512 guest rooms in two newly constructed buildings that spread from the historic structure like wings. JetBlue's modern Terminal 5 now stands between it and the active tarmac.
Guest rooms will have window views of the iconic Saarinen terminal and JFK’s runways, with thick glass paneling blocking out the noise of aircraft. 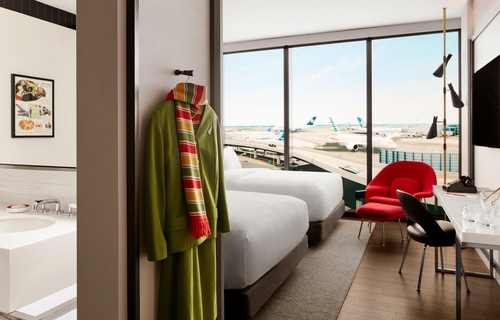 Décor is vintage: rotary phones, wooden accents, and plush beds and bathrooms inspired by classic Hollywood—appropriate because the Flight Center's camera-ready lines have long made it a popular filming location, from 1963’s The Wheeler Dealers to Steven Spielberg’s Catch Me If You Can.
The historic TWA Flight Center is the heart of the hotel, and it now has six restaurants, eight bars, high-end retail outlets, an Intelligentsia coffee bar, a 50,000-square-foot event space, a rooftop pool and observation deck, and a 10,000-square-foot fitness center.


Another retro addition is “Connie,” a Lockheed Constellation L-1649A Starliner airplane converted into a bar for cocktails—because design this mod can put anyone in the mood for one.
Should people care to tear themselves from all that to actually catch a plane, they can access JFK's Terminal 5 via the TWA Flight Center’s iconic “tubes.” The hotel is also served by the airport’s AirTrain shuttle, which links to the New York City subway system. 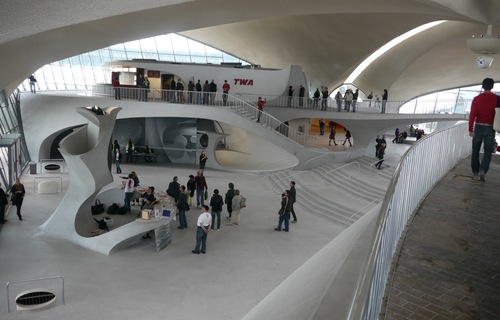 TWA Flight Center on an open day in 2012, when it was disused