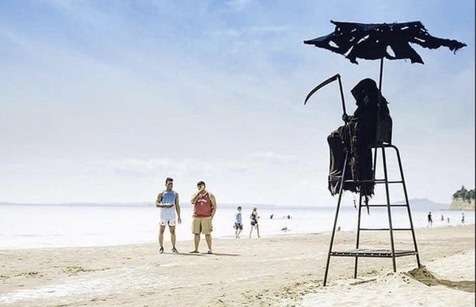 Florida Beachgoers Share the Sand with the Grim Reaper

Florida-based attorney Daniel Uhlfelder recently tweeted that he planned to start traveling around his state's beaches dressed as Death to send a message.

And no, that message is not "don't wear thongs." (Although that is excellent advice.)

Uhlfelder, who gained national fame by fighting against the planned privatization of Florida beaches, tweeted, "Many of you have asked if I am willing to travel around Florida wearing Grim Reaper attire to the beaches and other areas of the state opening up prematurely. The answer is absolutely yes."

Uhlfelder has said that his campaign will start May 1, and he's urging others to share the news. So that's what we're doing.

Unfortunately, there are few forms of sunblock that are more effective than 6 feet of dirt.

Florida Gov. Ron DeSantis gave his approval for the opening of many state beaches last Friday. A number of municipalities, including Jacksonville in Duval County, have already reopened their strands, joined by the counties of Levy, Dixie, and several others.

As of this writing, Florida has reported more than 1,000 deaths from Covid-19 and 30,000 known cases of the virus. But many scientists worry those numbers are deceptively low.

The heat map created by smart thermometer company Kinsa, which uses data collected nationwide to track atypical reports of fever by region, is showing southern Florida is burning up—and we're not talking about the weather.

In the past, Kinsa's high-temperature readings have soon developed into hot spots for hospitalizations.