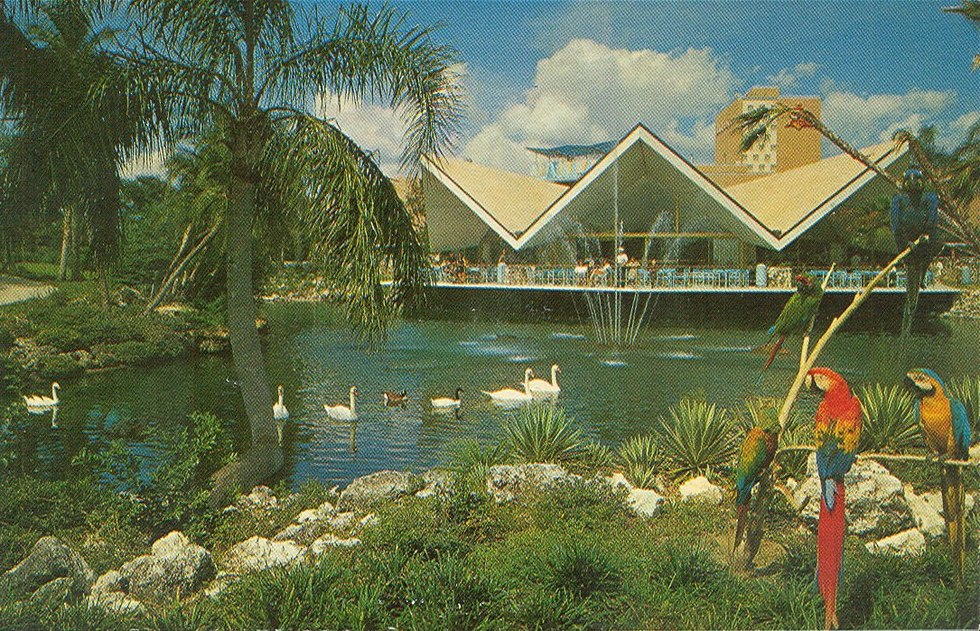 This post, originally published May 1, has been updated below.

When the all-American brewer Anhueser-Busch opened Busch Gardens amusement park in Tampa, Florida in 1959 (other locations preceded and followed it, but only the Tampa park and another in Williamsburg, Virginia remain), the main focus was, naturally, marketing the brand's products.

To that end, "hospitality houses" (Tampa's is pictured above, on a vintage postcard) were set up in the parks to distribute free beer samples to guests—a tradition that continued even as the parks added the roller coasters and exotic animals for which they're known today.

Until 2009, that is, when the Busch Gardens parks were sold to a new owner—not a brewer—and the river of free beer entered a drought.

From now through August 5, however, the river will flow once more. Each park guest age 21 and older at Busch Gardens Tampa Bay can get two complimentary 7-ounce beers with admission.

A new beer will be featured every two weeks, with scheduled offerings including Yuengling, Shock Top, MIA 305, and Founders All Day IPA. The complimentary brews can only be acquired at the Garden Gate Cafe, but you can drink them anywhere in the park except the Sesame Street Safari of Fun area.

And sorry, but the promotion has not been expanded to Busch Gardens Williamsburg in Virginia, at least not yet.

It has not been decided whether the Tampa property will continue doling out free pours past summer.

"We are going to run this all the way through August 5 and then we’re going to see where it goes from there," Busch Gardens Tampa Bay president Stewart Clark said, according to local news reports.

UPDATE (May 17): SeaWorld Orlando, which is owned by the same company that manages Busch Gardens, has announced that the park will be joining its sister property in giving out free beer this summer.

As at Busch Gardens Tampa Bay, guests of drinking age can get two complimentary 7-ounce pours each visit. A rotating selection of brews will include SeaWorld's in-house Mako Red Ale as well as Bud Light, Yuengling, and others.

The free beers will be dispensed from May 18 through September 2 at Mama’s Pretzel Kitchen, starting each day at 10:30am and lasting until one hour before the park closes.

For now, the free beer phenomenon is strictly a Florida thing. No plans have been announced to open the taps for non-paying customers at either SeaWorld property in San Diego or San Antonio.