"Game of Thrones" to Film in Northern Spain 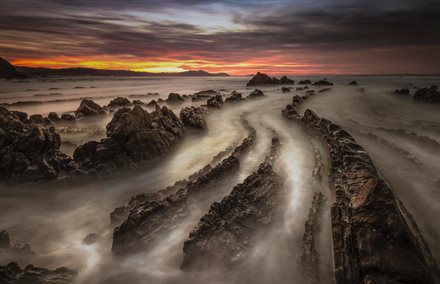 On the one hand, we have a hard time understanding why people would base their travel plans on what they see on Game of Thrones, given that life in Westeros seems pretty horrific all around.

On the other hand, some of the landscapes that appear in the HBO fantasy epic are so stunning that maybe it's possible to look past whatever violence, intrigue, or creepy family relations are taking place in the foreground.

That surely explains why some of the show's shooting locations, including Croatia and Northern Ireland, have seen tourism booms during the run of the series.

When the upcoming seventh season hits the air, fans might have another site to add to their travel wish lists: Muriola Beach, a rugged, cliff-protected stretch of sand near otherworldly rock formations and the village of Barrika in Spain's Basque Country.

Game of Thrones will start filming scenes on the beach in October. No information has been released yet about which characters will be involved, though some fans are speculating that this could be the landing area for Daenerys and her fleet.

At the moment, Muriola is frequented mostly by nude sunbathers.