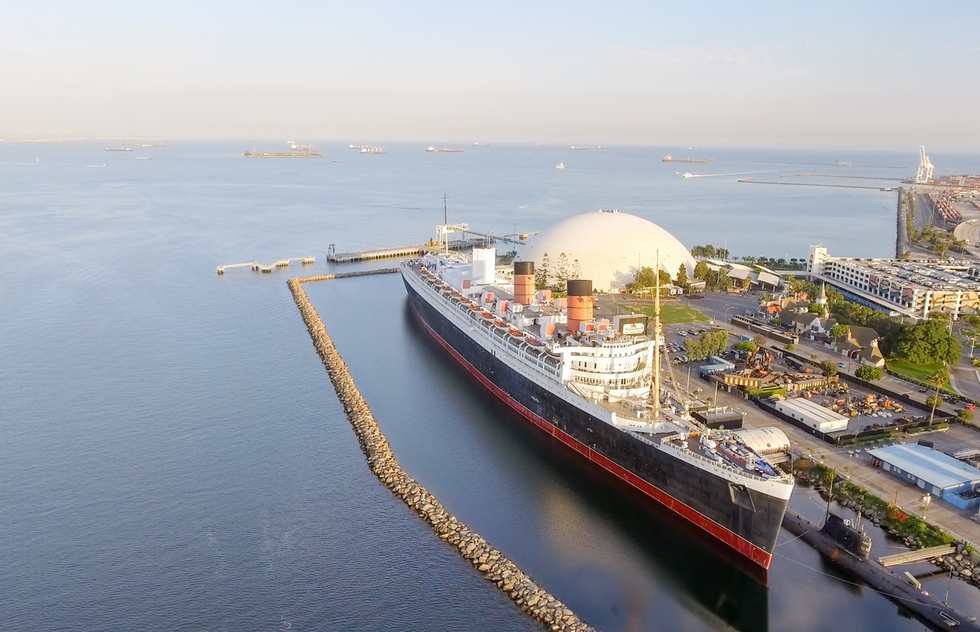 Historic Queen Mary Is In Dire Straits As Operator Collapses

January 2021 kept people occupied with a few other news headlines, so you're forgiven if you missed this one: The company that operates the famous and irreplaceable Queen Mary filed for bankruptcy.

Singapore-based Eagle Hospitality Trust claims more than $500 million in debt. And although Covid-19 has been harsh to the grand old ship, keeping it closed since May 2020, the pandemic isn't fully to blame.

At the beginning of 2020, Eagle HT was already in terrible financial shape. The Long Beach Post News reports that the company defaulted on a $341 million loan from Bank of America during the previous year.

The once-grand ocean liner has been permanently docked in Long Beach, California, since 1967. As the ship ended an oceangoing career that began in 1936, the city's government opted to buy the vessel to use as a tourist attraction.

That was a smart purchase in 1967, when everyone in the world knew about the speed feats and luxury profile of the Queen Mary, one of the few ships that could easily evade Hitler's attacks. And for a while, the vessel—safely docked with engines removed—was one of the most important tourist attractions in Southern California, on par with Disneyland and the Hollywood Sign.

But a half century later, Mary's fame has faded and her ability to draw visitors has flagged.

Now the vessel sits dormant, fittings decaying past repair. In normal times, it relies on income by operating as a novelty hotel, hosting temporary exhibitions and film shoots, and putting on one of the country's most atmospheric scary walk-throughs for Halloween. But a machine of this size and age requires much more attention than its modern financial situation can handle.

In 2015, the city determined that the ship needed $289 million in urgent repairs, yet only managed to raise $23 million. And the way that money was spent is now under audit, reports the Long Beach Post News.

Usually, the ship's maintenance is subsidized by port charges assessed on Carnival Cruise Line ships that share the harbor. But now that the cruise industry is also docked due to the pandemic, that income has dried up.

Students of transportation history have long advocated for more careful stewardship of this priceless leftover from the golden age of travel.

“It is tragic that we never viewed the [Queen Mary] as a major maritime preservation responsibility," advocate Bill Cwiklo told the Long Beach Press-Telegram in 2013, "rather we viewed it as a carcass to do with what we wished."

Examples from the heyday of ocean liners are rare—in fact, there are no others. The closest contender, the Queen Elizabeth 2, which is now a hotel in Dubai, was actually an imitator launched in 1967, after the peak of the liner had passed.

The difficulty and expense of maintaining such massive vessels has meant that no others have survived in the same condition in which they sailed.

"There are more pyramids you can visit today than there are original, preserved ocean liners," says maritime historian Chris Frame.

No operator has been able to right the listing fortunes of the Queen Mary in decades, yet Long Beach officials broadcast upbeat prospects. The city's Economic Development Director, John Keisler, told the Post News that if bankruptcy permanently disqualifies Eagle Hospitality Trust, then another suitor will rise to take its place.

“The reason they’re willing to take this on is because of the opportunity for real estate development on the waterfront of Southern California,” Keisler said. “And we think we’ll get it, either with this group or another group, depending on the outcome of these next few weeks.”

Learn about the Queen Mary's incredible résumé with this short feature from a 2014 installment of CBS News Sunday Morning: